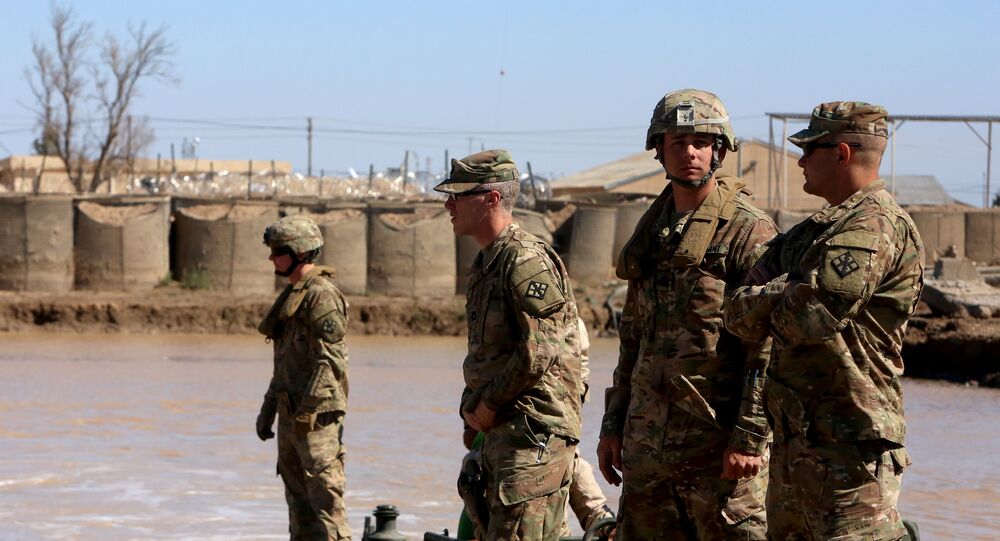 US military officials previously claimed that they had notified Iraqi authorities of an impending airstrike on the positions of Iraqi-based paramilitary groups in retaliation for 11 March attacks on the Camp Taji military base.

The Iraqi military has cautioned the US and other foreign forces against taking any military action in Iraq without the government's approval, adding that recent missile strikes against the Camp Taji military base can't serve as a pretext for unauthorised actions. The military has also called on all foreign forces to fulfil the demands of an earlier non-binding resolution by the country's parliament and withdraw from Iraq.

The country's military also promised to investigate the circumstances of 14 March missile attacks on the Camp Taji military base that left several Iraqi servicemen critically injured. They stated that the launch site along with 24 unused missiles was found in an area close to the base and vowed to arrest those responsible for the attack.

© AP Photo
This photo released by the government-affiliated Media Security Cell on Thursday, March 12, 2020, shows a rocket-rigged truck launcher after a rocket attack on Camp Taji, a few miles north of Baghdad, in Rashidiya, Iraq. Iraq's military on Thursday said it opened an investigation into the rocket attack that hours earlier killed three servicemen, including two Americans, at an Iraqi base housing coalition forces that has been used as a training base for a number of years. (Media Security Cell via AP)

Attack on US-led Coalition's Military Base in Iraq

At least 10 Katyusha rockets struck the Camp Taji military base, which houses foreign troops, on Saturday, Al-Jazeera reported. The US-led coalition's spokesman, Myles Caggins, elaborated that three coalition troops and two Iraqi servicemen were injured as a result of the rocket strike and added that a probe into the attack is ongoing.

This was the second attack on the base this week with the last one taking place on 11 March and reportedly leaving one British and two American soldiers dead, as well as over a dozen injured.

The US conducted retaliatory strikes against Iraqi-based group Kataib Hezbollah and state-sponsored Popular Mobilisation Forces (PMF) in response to the Wednesday attack. While the US command claimed that it consulted with Iraqi authorities about the impending "defensive" strikes, it is not clear if Baghdad had actually approved it.

"We consulted with them [Iraq] in the wake of the attack. They knew the response was coming", US Central Command (CENTCOM) commander Kenneth McKenzie said.

Iraqi officials have condemned the attack, with the military stating that it resulted in the deaths of three soldiers, two policemen, and a civilian. Iraqi President Barham Salih slammed the attacks as a violation of the country's sovereignty. The country's foreign ministry even summoned the US envoy to Iraq on 13 March to hand over a note of protest against unauthorised attacks committed on Iraqi soil.