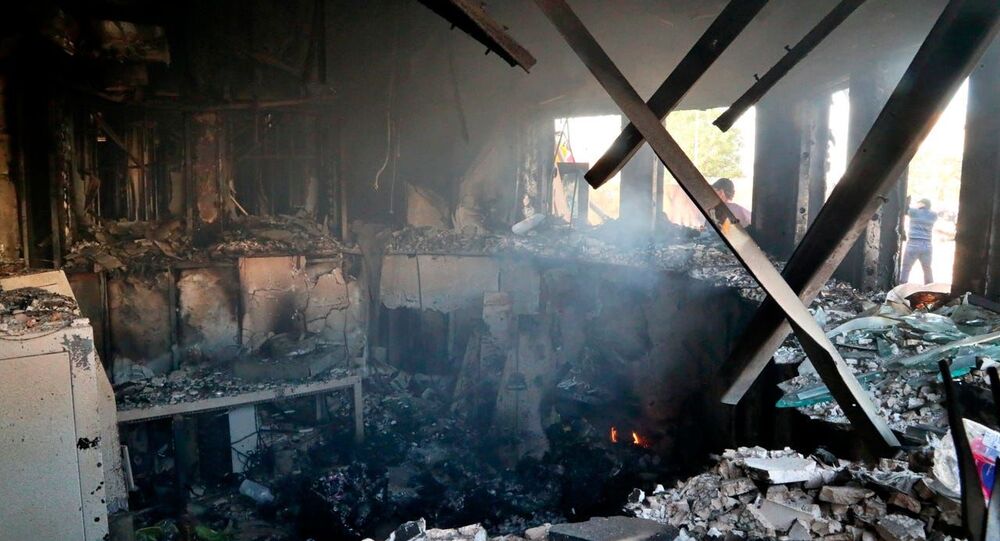 Photos: Devastation Inside Torched US Embassy in Baghdad Revealed

Three days after thousands of angry Iraqi protesters laid siege to the US Embassy in Baghdad, photos have emerged of the devastation wrought, including the torched outer areas of the facility.

Photographers from the Associated Press were permitted Wednesday to take pictures of the damaged areas of the US Embassy in Iraq, a fortified facility located inside the International Zone, formerly called the Green Zone, in central Baghdad.

A day prior, several thousand Iraqis, angered by a slew of US airstrikes against the Iraqi Shiite militia Kata'ib Hezbollah that killed 25 militia members and left 51 other people injured, marched to the US Embassy and attempted to enter it. As Iraqi police refused to stop them the protesters set fire to the outer parts of the sprawling walled complex.

The photos show the facility’s charred reception room as well as a checkpoint, both gutted by flames and with many windows smashed.

The demonstrators, some of whom hailed from militias that, like Kata'ib Hezbollah, are part of the country’s Popular Mobilization Forces, retreated hours later amid tear gas and nonlethal crowd dispersal weapons fired by police.

Washington quickly shuffled 100 more US Marines, which are tasked with defending the country’s diplomatic facilities around the world, into Baghdad from Kuwait to further fortify the embassy. They were accompanied by two Apache attack helicopters, which flew patrols around the Iraqi capital, firing off flares to intimidate would-be protesters.

In the aftermath of the US airstrikes as well as the Thursday assassination of Iranian Quds Force commander Qassem Soleimani at Baghdad Airport at the hands of US forces, Iraq’s parliament has announced it will convene an extraordinary session on Sunday as lawmakers seek to legally evict US forces from the country.