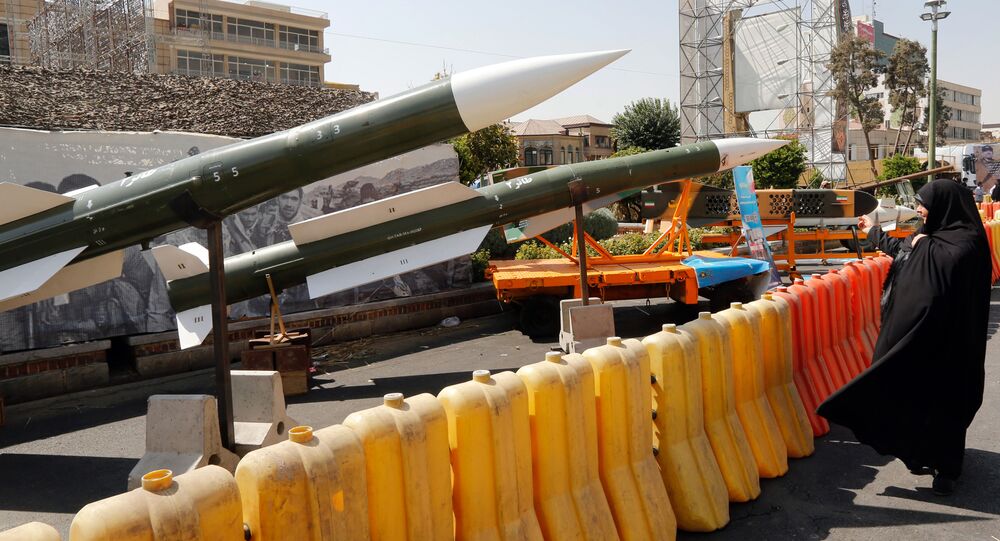 Anonymous US officials reported the seizure of a “significant cache” of missile parts by a US destroyer in the Gulf of Oman last week, with the weapons reportedly being linked to Iran and suspected of being smuggled to the Houthis in Yemen. The report comes amid backroom peace talks to end the war in Yemen.

The USS Forrest Sherman seized missile parts found onboard a boat in the Gulf of Oman last week, an anonymous US official told the Associated Press Wednesday. The official said the weapons were linked to Iran and believed to be bound for Yemen and the Shiite Houthi militant movement there.

The anonymous official did not say how many missiles or parts were found, only that a small wooden boat had aroused US suspicion by not flying a country flag, prompting the destroyer to stop and search it.

The US and its allies have accused Tehran of supporting the Houthi movement before, claiming Iran is fighting a proxy war against its regional rival Saudi Arabia, which has waged a bloody war in Yemen against the Houthis for nearly five years.

In December 2017, then-US Ambassador to the United Nations Nikki Haley presented what she called the “smoking gun” of Iranian support for the Houthis: pieces of a missile fired at Saudi Arabia’s King Khalid International Airport just outside the capital of Riyadh, which she claimed were of Iranian origin.

Iran’s envoy to the UN at the time, Gholamali Khoshroo, said the accusations were “fake and fabricated,” an attitude generally shared at the time even by US allies. Major General Mohammad Ali Jafari, commander of Iran’s Islamic Revolutionary Guard Corps, later explained the Houthis had overhauled older missiles themselves, turning them into more potent weapons.

Washington renewed the accusation in June 2019 following the downing of a US drone over Yemen by Houthi forces. The US said the anti-air missile that struck the drone had been provided to the Houthis by Iran, but as Sputnik reported, the old, Soviet-made weapon was sold to dozens of nations decades ago and could have been bought anywhere.

US allies split in September over the issue of who carried out the aerial attack on two Saudi Aramco petroleum sites in eastern Saudi Arabia: Washington claimed the missiles were fired from Iran, while Israeli Foreign Minister Israel Katz claimed the Houthis carried out the attack, as the group itself claimed, but at Tehran’s orders.

The Houthis have been fighting a war against the Saudi-led coalition since March 2015, when the group forced Yemeni President Adrabbuh Mansur Hadi out of office. The Zaidi Shiite group represented a diverse alliance of Yemenis disaffected by Hadi’s federalization plans and slashing of state welfare benefits, both of which hit the northern border areas the Houthis call home extremely hard. The Saudis claim to be defending the Yemeni government’s sovereignty, but they and their chief partners, the United Arab Emirates, have also found erstwhile allies in the radical Islamist militias active in Yemen, including Al-Qaeda in the Arabian Peninsula, which now controls much of the country’s southeast.

Via Riyadh and Abu Dhabi, US weapons have been found in the hands of these militias in large numbers, including American MRAP anti-mine vehicles, French LeClerc main battle tanks and Agrab Mk2s, a unique vehicle of South African design.

Peace Deal in the Works

Sputnik reported last week on peace talks between the Houthis and Saudis being quietly hosted by Oman’s Sultan Qaboos bin Said in Muscat and accompanied by large prisoner exchanges.

Former Yemeni Foreign Minister Abu Bakr al-Qirbi told Foreign Policy that handling of the peace talks by Saudi Vice Minister of Defence Prince Khalid bin Salman, brother of de facto Saudi leader Crown Prince Mohammed bin Salman, reflected “a commitment to a final comprehensive peace … and a realization that there is no military solution to the conflict. I believe Prince KBS hopefully has come with a new vision to put an end to a costly war which has created great regional stability.”

“The war has exhausted Saudi Arabia financially, and the worsening military situation in its south is not in its best interest,” Nabeel Khoury, the former deputy chief of mission at the US Embassy in Sana’a, told the US-based outlet Al-Monitor for an article published on November 26. “The fact that Prince Khalid has been assigned the Yemeni dossier is positive because it is a complicated issue and it needs a full-time decision-maker who Mohammed bin Salman trusts.”

An estimated 91,000 Yemenis have died as a result of the war, most of them civilians killed by the humanitarian catastrophe created by shortages of food, medicine and clean water. Despite the Saudi air campaign, the Houthis have gone on the offensive in the last year, conducting deeper strikes inside Saudi Arabia that targeted airfields, petroleum facilities and other sites.