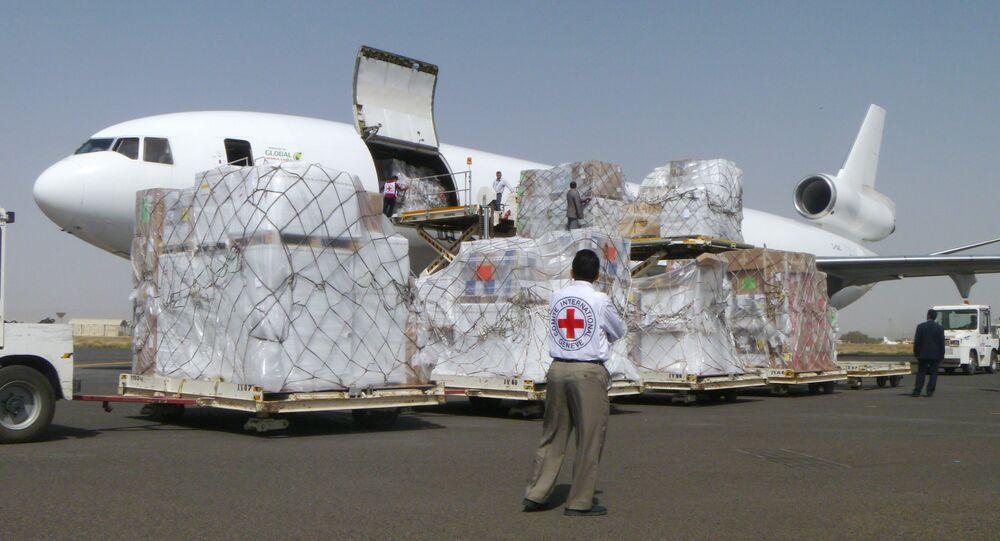 The Saudi-led coalition force in Yemen announced Tuesday it had released 200 Houthi prisoners. The news comes amid a large Houthi air raid on coalition forces and swirling rumors that Riyadh may finally be seeking an exit from the disastrous, four-year-long war.

On Tuesday, coalition spokesperson Turki al-Malki said in a statement carried by the Saudi Press Agency that 200 Houthi prisoners had been released as part of the Stockholm Agreement prisoner exchange, Xinhua News Agency reported.

“The coalition leadership is keen to continue supporting efforts to resolve the crisis in Yemen and to push forward the Stockholm agreement, including the deal related to the exchange of prisoners,” Malki said. He further noted the coalition would allow flights out of Sana’a, the Yemeni capital held by the Houthis since 2014, in order to transfer those who need medical treatment out of the country.

International Committee of the Red Cross spokesperson Ruth Hetherington told Reuters the group was aware of the coalition’s “intention to release 200 detainees,” noting, “We are in contact with the parties in this regard. We are ready to facilitate the repatriation of these detainees.”

Mohammed Ali al-Houthi, a senior official in Ansar Allah, better known as the Houthi movement, told Reuters the movement welcomed the release, which follows the unilateral release of 350 coalition prisoners held by the Houthis in September.

The war in Yemen has raged since March 2015, when Yemeni President Adrabbuh Mansur Hadi fled the country for Riyadh amid a steady takeover by the Houthi movement and allied supporters of former Yemeni President Ali Abdullah Saleh. Hailing from a Zaidi Shiite minority near the Saudi border, the Houthis objected to Hadi’s federalization scheme for the country and his sharp slashing of social programs, as well as a sharp spike in gas prices that hit the Houthis especially hard.

Hadi sought Saudi help against the Houthis and their allies, and Riyadh quickly gathered a coalition that included the United Arab Emirates, Sudan and Morocco, as well as forces loyal to Hadi inside Yemen - which have included extremist militias like Al-Qaeda in the Arabian Peninsula (AQAP). The US also provided logistical and targeting information for the coalition, including refueling coalition planes.

However, Riyadh and its allies have failed to accomplish any of their goals in the conflict, which grows increasingly expensive in both money and international clout. At the same time, the Houthis have not only been able to hold on to existing territory amid Saudi strikes and Western weaponry, but in the last year they have repeatedly gone on the offensive, mounting missile strikes on airports, air bases and economically central oil facilities inside Saudi Arabia. The most dramatic but also most controversial example is the pair of strikes on Saudi Aramco facilities in Eastern Province in mid-September, for which Houthi claims of credit were contradicted by US intelligence, which pointed the finger at Iran.

The war in Yemen has led to the deaths of up to 91,000 people, according to some estimates, and caused a massive humanitarian crisis as shortages of food, medicine and clean water become chronic.

The US has blamed Iran for the Houthis’ success, as have Tehran’s regional rivals, Israel and Saudi Arabia, which claim Iran is waging a proxy war in Yemen. However, no substantial intelligence has verified these claims, and experts have noted they defy reasonable explanation.

A Backroom Deal in Oman

Meanwhile, signs increasingly point toward secret negotiations between the two sides being held in neighboring Oman for the past several weeks.

On Sunday, Arabi21 reported that an anonymous source told the outlet the Houthi leadership had been meeting with Saudi officials in Oman for weeks, mediated by several countries. The source also noted an exchange of delegates between Sana’a and Riyadh.

Former Yemeni Foreign Minister Abu Bakr al-Qirbi told the outlet KBS’ visit reflected “a commitment to a final comprehensive peace … and a realization that there is no military solution to the conflict. I believe Prince KBS hopefully has come with a new vision to put an end to a costly war which has created great regional stability.”

“The war has exhausted Saudi Arabia financially, and the worsening military situation in its south is not in its best interest,” Nabeel Khoury, the former deputy chief of mission at the US Embassy in Sana’a, told the US-based outlet Al-Monitor on Tuesday. “The fact that Prince Khalid has been assigned the Yemeni dossier is positive because it is a complicated issue and it needs a full-time decision-maker who Mohammed bin Salman trusts.”

“The bombing of Aramco is one of the reasons that led to the negotiations because it increased the cost of war and raised fears of damaging the Saudi economy should the war continue,” Khoury said, noting, “The obstacle to consultations is the lack of trust between the parties to implement any agreement they may reach.”

It’s far from the first attempt at a peace deal: a September ceasefire in the aftermath of the Saudi Aramco attacks fell apart almost as quickly as it was created, and local ceasefires, such as that agreed to in December 2018 around the vital port city of Hudaydah, have seen thousands of violations.

Omani Minister Responsible for Foreign Affairs Yousuf Bin Alawi said on Omani media Tuesday that there was a reciprocal desire for stability and security, Abu Dhabi-based Gulf News reported, noting the minister declined to further elaborate. The outlet noted his remarks followed a meeting with US Secretary of State Mike Pompeo.

Washington attempted to jump-start direct peace talks with the Houthis in September, but Khoury told Al-Monitor, “Saudi Arabia has its own reasons to start these negotiations with the Houthis.” He noted that “US encouragement is useful here.”

Emirati Minister of State for Foreign Affairs Anwar Gargash has also expressed support for the talks, noting at a political conference earlier this month in Abu Dhabi the possibility of the Houthis being involved in a future Yemeni government.

"Such an agreement must take account of the legitimate aspirations of all parts of Yemeni society. That includes the Houthis," Gargash said, according to a Tuesday report from the London-based New Arab. "Houthi militias have wreaked havoc on the country, but they are a part of Yemeni society and they will have a role in its future."

‘We Call This De-Escalation’

News of the prisoner release is accompanied Tuesday by claims of a large-scale air raid on the Red Sea port of Mocha, also known as al-Makha, which is controlled by coalition-aligned forces.

Houthi spokesperson Yahya Saria told the group’s al-Masirah TV Monday the raid involved nine ballistic missiles and 20 drones and was in response to a previous attack by the targeted group against Hudaydah, which serves as a lifeline for the northern part of the country to the outside world. Saria said the strikes killed or injured more than 350 coalition troops and destroyed arms depots, armored vehicles and US-made Patriot air defense systems.

However, overall, violence has been on the wane in Yemen for months, with the Houthis halting air attacks on Saudi Arabia after the Aramco strikes on September 14. United Nations Special Envoy for Yemen Martin Griffiths told the UN Security Council Friday that the last two weeks had seen an 80% reduction in airstrikes in the country, noting it was “an even more important sign” than the peace talks.

"In recent weeks there have been entire 48-hour periods without airstrikes at all - the first time since the conflict began,” Griffiths said via video conference from his office in Amman, Jordan. “We call this a de-escalation and a reduction in the tempo of the war, and perhaps we hope a move to an overall ceasefire in Yemen that … many members of this Council have been calling for a very long time.”