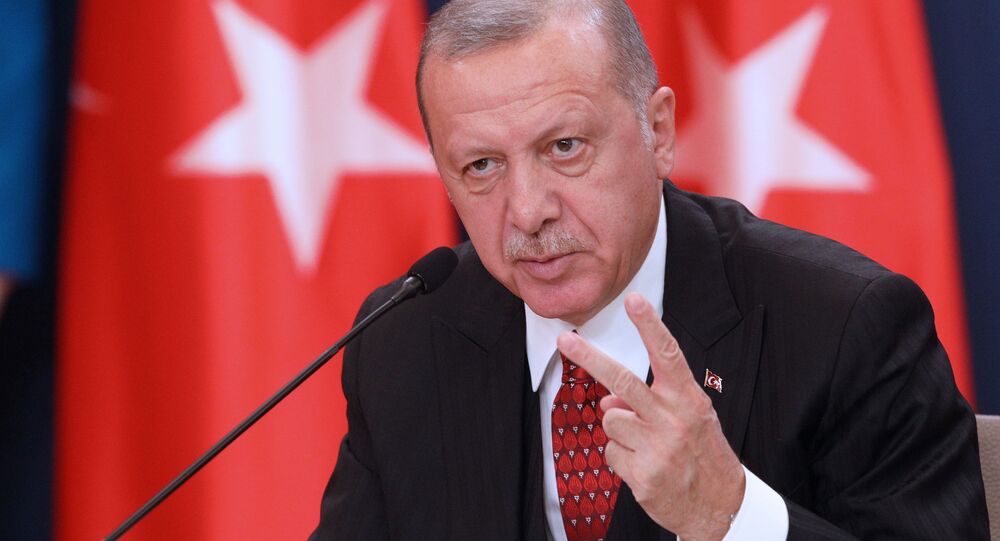 On 17 October, Turkey and the US reached a 120-hour ceasefire agreement to allow Kurdish forces to leave the 'safe zone' imposed by Ankara in areas in northern Syria.

Turkish President Recep Tayyip Erdogan announced on Tuesday that the 120-hour ceasefire period had expired, according to Turkey's NTV Channel.

The president said the US had not "fully completed promises in Syria deal," and added that Ankara is prepared to take "necessary steps," according to the report.

"The promises given [by the US] were not fulfilled entirely. We will accept the results, take necessary steps," Erdogan said, according to NTV. "If we compromise, we will pave the way for terrorist organizations."

Within the framework of the agreement, the Turkish Ministry of Defence monitored the process of the withdrawal of forces from the Kurdish People's Protection Units (YPG) from the 30-kilometer 'safe zone' imposed by Ankara. According to the Ministry, 136 vehicles left the area during this period.

"All terrorists encountered after the ceasefire is expired" will be killed, the Ministry said, according to NTV.

"Our right to self-defence against harassment and violations is always valid," the Turkish ministry said, adding that all ceasefire violations were immediately reported to the US.

Turkey considers the Kurdish YPG, which comprises the backbone of the Syrian Democratic Forces (SDF), a terrorist organization, claiming the SDF is indistinguishable from the domestic Kurdistan Workers' Party (PKK). Ankara's military operation in northern Syria seeks to push Kurdish forces away from the Turkish border as a means of creating a 30-kilometer 'safe zone'. The military invasion, named Operation Peace Spring was announced on 9 October. On Thursday last week, Ankara and Washington agreed to a 120-hour ceasefire in a bid to allow Kurdish forces to leave the safe zone imposed by Ankara in northern Syria.

Earlier Tuesday, Erdogan vowed to relaunch his offensive "even more strongly," should Washington "break its promises" under the deal.

The same day, Erdogan and Russian President Vladimir Putin announced a joint memorandum on Syria. Ankara said the agreements with Washington and Moscow are independent of each other.

"Today’s agreement with Russia is independent of the Turkey-US deal, under which all PKK/YPG terrorists are required to leave the safe zone," Turkey's Communications Director Fahrettin Altun wrote in his Twitter.