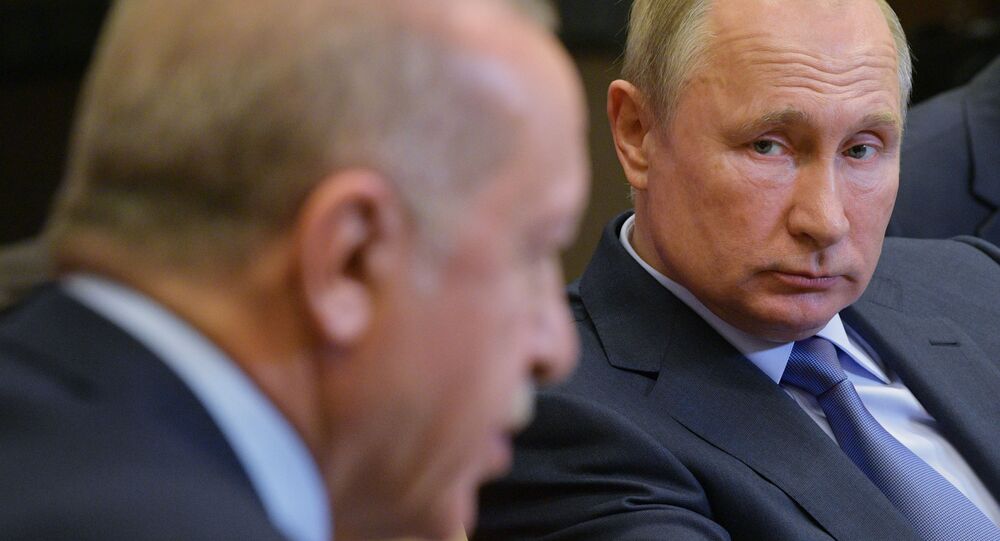 Vladimir Putin and Recep Tayyip Erdogan met in the Russian city of Sochi to discuss an array of issues, with the situation in Syria and the Turkish military operation there expected to be the main topic of their conversation.

In the presser that followed the talks between the Russian and Turkish presidents on Syria, Vladimir Putin stated that foreign forces currently deployed unlawfully in the Arab Republic must leave in order for the country to return to stability. He added that Turkey shares this vision, as well as that the idea that the Arab Republic's integrity must be preserved.

Separately, he advocated that the Syrian government and Kurdish forces need to hold broad talks in order to take into account the interests of all the religious confessions that exist in the country. Putin noted that Russia shares Turkey’s concerns about separatist sentiments in Syria, which, as the Russian president said, have been stimulated from outside the country.

Russian Foreign Minister Sergei Lavrov stressed in this regard that the implementation of the joint memorandum, signed by the two presidents as a result of the talks, will undermine "any separatist games" being conducted on Syrian territory.

In the joint memorandum of the two presidents, both countries pledged to work towards finding a lasting political solution for Syria within the Astana Mechanism and promised to assist the Constitutional Committee in this endeavour.

The two presidents have reached an agreement that the Turkish military operation in Syria will be limited to a distance of within 30 kilometres from the Turkish-Syrian border. Moscow will send military police, while Damascus will send border guards in order to ensure the removal of YPG forces and their weapons up to a "depth of 30 kilometres away from the border". The operation needs to be completed within a timeframe of 150 hours.

After YPG forces are removed, Turkey and Russia will organise joint patrols to the east and west of Ankara’s military operation, covering a 10-kilometre wide zone, with the exception of Qamishli city.

Following the end of the talks between the two presidents, Russian Foreign Minister Sergei Lavrov stated that the signed memorandum will ensure the end of the bloodshed in Syria, arguing that it is an important step towards a Syrian peace settlement.

At the same time, Russian Defence Minister Sergei Shoigu stated in the wake of the Sochi meeting that the US, which is currently withdrawing its troops from northern Syria according to its agreements with Turkey, has to fulfil all of its obligations in Syria within 1 hour and 31 minutes. Shoigu added that Erdogan and Putin didn't discuss how long the Turkish forces will stay in the zone comprising Operation Peace Spring in Syria.

Erdogan and Putin also addressed the humanitarian aspect of the situation in Syria, with the Russian president saying that the sides have agreed that the return of Syrian refuges should be facilitated as this would lift the burden from the countries that received them in the first place. The memorandum of the two countries stressed that the return of refugees must be conducted in a safe and voluntary manner.

Ankara launched Operation Peace Spring on 9 October targeting Kurdish forces occupying northern Syria to the east of the Euphrates. The Kurdish-led SDF and YPG, which control these areas, are seen by Turkey as branches of the PKK, considered a terrorist organisation by Ankara.

Erdogan: Turkey Will 'Crush the Heads' of Kurds in N Syria if They Don't Withdraw Before Tuesday