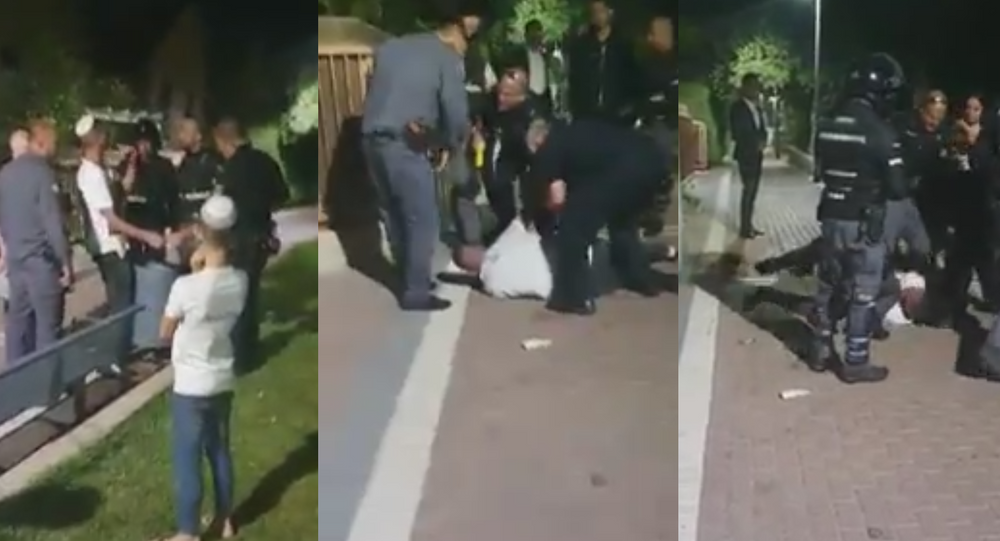 An Israel Police officer has been suspended and an internal probe has been launched after a viral video showed the cop tasing a nonviolent man who requested to be transported to the station on foot on Shabbat.

Footage from an arrest in the northern Israeli city of Migdal HaEmek last Friday has sparked online outrage from individuals claiming the officer who deployed the Taser during the incident escalated the situation and violated police protocol.

The video, uploaded to Facebook by Orly Biton, a cousin of the arrestee Eliran Zrihan, has received more than 155,000 views since it was posted on Tuesday and shows the incident after police officers responded to a noise complaint that cited teenagers as the disrupters.

“The officers jumped him and handcuffed him without checking for whom the police were alerted,” Biton wrote in the translated Facebook video description.

Biton claimed that her cousin happened to be walking in the area referenced in the complaint and was misidentified as one of the teenagers causing a ruckus.

While Zrihan is seen being cooperative and calm at the beginning of the video, the matter began to escalate after the man requested to be transported to the police station on foot because he was observing Shabbat and, in turn, refrained from operating a vehicle or riding as a passenger on the holy day.

“Are you resisting an arrest?” one officer asked repeatedly, according to a translation by the Times of Israel.

Not long after asking the question, a cop deployed his Taser, causing the man to fall to the ground as some onlookers clapped and others tried to intervene. Officers then handcuffed Zrihan from the front, grabbed all four of his limbs and transported him to the police cruiser while cops with protective headgear and vests accompanied them.

“If until now we were afraid of our kids being hurt by teenagers wandering around at night, today we are afraid of the Israel Police,” Biton said on Facebook, labeling the arresting officers as “criminals in uniform” who treated her cousin as if he was a “terrorist on his way to carry out an attack.”

The Times of Israel reported that an initial probe by the Israel Police identified the cop had “not acted as expected of a policeman in such a situation.” According to Israeli law, officers are only allowed to use their Tasers in situations in which they believe they are in immediate danger.

“Therefore, the material has been handed to the Police Internal Investigations Department for an investigation, and simultaneously it has been decided for now to suspend him with immediate effect,” the civilian police force said in a statement obtained by the outlet. “As the probe ends further steps will be decided.”

However, the Israel Police noted that while this incident is unacceptable and the officer who deployed the Taser has since been suspended, the scene “does not at all characterize the Israel Police officers who professionally enforce the law every day and serve millions of citizens with professionalism, dedication and mutual respect to every human.”

It’s unclear whether the other cops involved will be reprimanded.