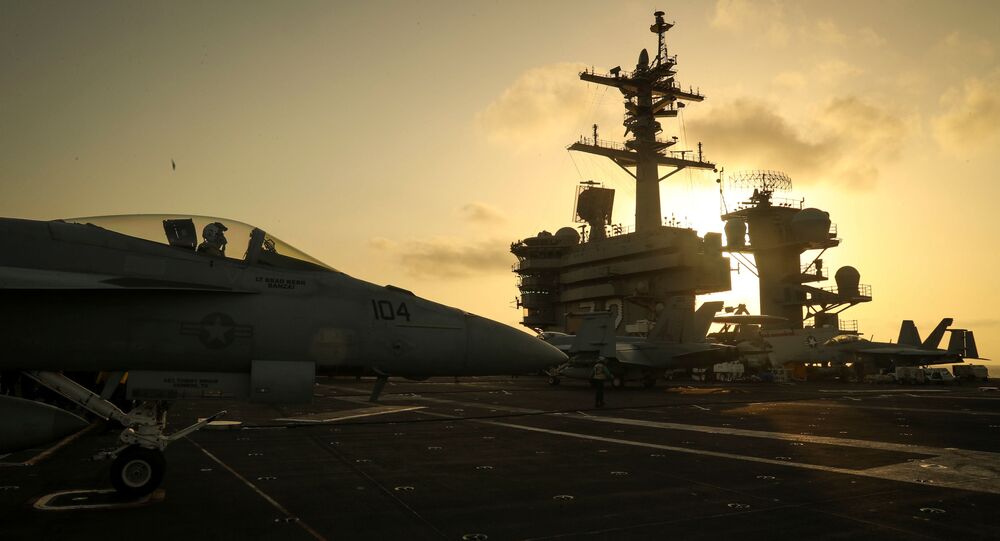 The warning comes on the heels of US accusations that Iran was behind the attacks on two oil tankers in the Gulf of Oman on 13 June - just one month after a similar incident near Fujairah was likewise blamed on the Islamic Republic.

The Iranian mission to the United Nations has urged the United States and its allies in the Middle East to "stop warmongering" and false flag operations in the region following attacks on two oil tankers in the Gulf of Oman on 13 June that were blamed on Tehran.

"Neither fabrications and disinformation campaigns nor shamelessly blaming others can change the realities. The US and its regional allies must stop warmongering and put an end to mischievous plots as well as false flag operations in the region. Warning, once again, about all of the US coercion, intimidation, and malign behavior, Iran expresses concern over suspicious incidents for the oil tankers that occurred today", the statement issued on Thursday read.

The mission has also "categorically" rejected Washington's accusations of Tehran being responsible for the oil tanker incidents as unfounded.

"The inflammatory remarks by the US representative against Iran at the UN Security Council on 13 June 2019 was another Iranophobic campaign", it added.

In a separate development, the country's foreign minister, Mohammad Javad Zarif took to Twitter to stress that the US accusations were part of "sabotage diplomacy" to cover up what he has repeatedly described as "economic terrorism" against Iran:

I warned of exactly this scenario a few months ago, not because I'm clairvoyant, but because I recognize where the #B_Team is coming from.

These remarks follow US Central Command's deployment of the US Navy destroyer USS Mason to the Gulf of Oman "to provide assistance" shortly after US Secretary of State Mike Pompeo pointed the finger at Tehran while referring to an assessment based on intelligence, weapons used, and level of expertise required to carry out the operation.

"USS Mason is en route to the scene to provide assistance. The US and our partners in the region will take all necessary measures to defend ourselves and our interests. Today's attacks are a clear threat to international freedom of navigation and freedom of commerce", CENTCOM spokesman Lieutenant Colonel Earl Brow said in a Thursday press release.

Multiple media reports have suggested that the vessels were exposed to torpedoes, which caused blasts and a blaze on at least one of them. According to IRNA, Iranian rescue teams evacuated 44 sailors from both ships and took them to the Iranian port of Jask, while US officials were cited by CBS as dismissing those claims as "patently false".

The incident comes one month after four oil tankers - two Saudi, one Norwegian, and one Emirati - were tageted in what Abu Dhabi described as "acts of sabotage" near Fujairah.

The incident did not cause any casualties or oil spill. Shortly thereafter, several unnamed US officials were cited by AP as saying that “Iranian or Iranian-backed proxies” are believed to be responsible for the incident.

Tehran, for its part, urged for an investigation and cautioned against “any conspiracy orchestrated by ill-wishers” and “adventurism by foreigners” to undermine the region’s stability.

Tensions have been simmering in the Gulf region since the US withdrew from the Iran nuclear deal in May 2018, but dramatically escalated last month after the Pentagon deployed an aircraft carrier strike group and a bomber task force to send a “clear and unmistakable” message to Iran that any attack on American interests or those of its allies would be met with “unrelenting force”.