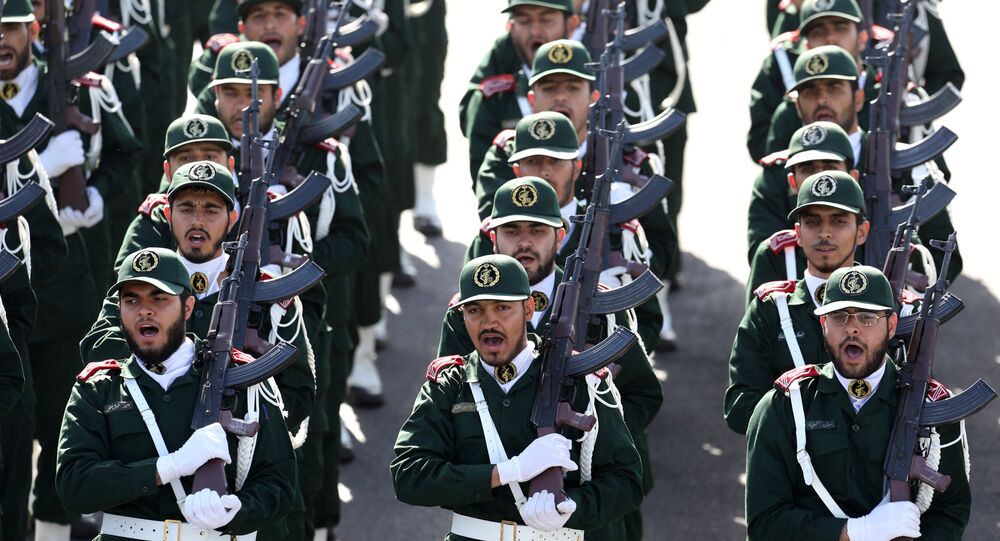 This comes after Hossein Salami, the commander of Iran’s Islamic Revolutionary Guard Corps (IRGC), claimed that the US is waging psychological war in the Middle East amid ongoing tensions between Tehran and Washington.

The US military presence in the Gulf used to be a serious threat but now it is an opportunity, according to a commander of Iran’s Islamic Revolutionary Guard Corps (IRGC).

“An aircraft carrier that has at least 40 to 50 planes on it and 6,000 forces gathered within it was a serious threat for us in the past but now […] the threats have switched to opportunities," Amirali Hajizadeh, head of the IRGC’s aerospace unit, was quoted as saying by the Iranian Students' News Agency (ISNA).

He also pledged that Iran will “hit Americans in the head if they make a move”.

Separately, another IRGC commander, Hossein Salami, accused the US of waging psychological war in the Middle East, according to a parliamentary spokesman who summarised Salami’s address to the Iranian MPs.

“Commander Salami, with attention to the situation in the region, presented an analysis that the Americans have started a psychological war because the comings and goings of their military is a normal matter,”  Behrouz Nemati pointed out.

Separately, Al Jazeera quoted Salami as saying that it's unlikely that the US will use its aircraft carriers against Iran.

He argued that Iran’s defence capabilities are “adequate and sufficient”, while the US aircraft carriers are quite vulnerable, which is why “Washington will not take a risk [using the carriers against the Islamic Republic]”.

Salami’s remarks followed a statement by Vice Admiral Jim Malloy, commander of the US Navy’s Bahrain-based Fifth Fleet, that he does not rule out sending the Abraham Lincoln aircraft carrier to the strategic Strait of Hormuz in light of Washington’s tensions with Tehran.

“If I need to bring it inside the strait, I will do so. I’m not restricted in any way, I’m not challenged in any way, to operate her anywhere in the Middle East,” Malloy told Reuters.

This came a few days after acting US Defence Secretary Patrick Shanahan ordered the deployment of the USS Arlington, a San Antonio-class amphibious transport dock and more MIM-104 Patriot missile defence systems to the US Central Command (CENTCOM) region.

Earlier, National Security Adviser John Bolton announced that the US was deploying the USS Abraham Lincoln Carrier Strike Group and a bomber task force near Iran; he described the deployment as “a clear and unmistakable message to the Iranian regime that any attack on US interests or on those of our allies will be met with unrelenting force”.

Bolton signalled Washington’s readiness to “to respond to any attack, whether by proxy, the Islamic Revolutionary Guard Corps, or regular Iranian forces”, adding at the same time that the US is not seeking war with Iran.

Tehran, for its part, rejected allegations that it poses a threat to the US as “fake intelligence”, with Iran's Supreme National Security Council spokesman Keivan Khosravi slamming Bolton’s statement as “a clumsy use of an out-of-date event for psychological warfare”.

Senior Iranian cleric Ayatollah Yousef Tabatabai-Nejad in turn quipped at the US carrier group's Middle East deployment, suggesting that “their billion-dollar fleet can be destroyed with one missile” if war breaks out.

“If they attempt any move, they will [face] dozens of missiles because at that time government officials won't be in charge to act cautiously, but instead things will be in the hands of our beloved leader,” Tabatabai-Nejad said, referring to Supreme Leader Ayatollah Ali Khamenei.

Iranian President Hassan Rouhani has meanwhile stressed that the Islamic Republic is facing an "all-out war" due to unprecedented restrictive US economic and political measures and that Tehran “should not accept submission and should try to find a solution”.

© AP Photo / Vahid Salemi~
Price Drop: Iran Pulls Out Stops to Sell Oil to Counter US Sanctions - Minister
Simmering tensions between Iran and the US escalated in recent weeks after the US blacklisted the IRGC as a terrorist organisation last month, in a move that prompted Iran to respond in kind by recognising the US Central Command as a terror group.

Also last month, the US refused to renew waivers to secondary sanctions on several major importers of Iranian crude oil.

On Wednesday, Rouhani announced that Tehran is suspending some of its commitments under the 2015 nuclear deal, also known as the Joint Comprehensive Plan of Action (JCPOA). Rouhani added that Tehran would give the JCPOA signatories 60 days to return to the negotiating table and ensure that Iran's interests are protected under the deal and that otherwise, Iran will resume higher uranium enrichment.