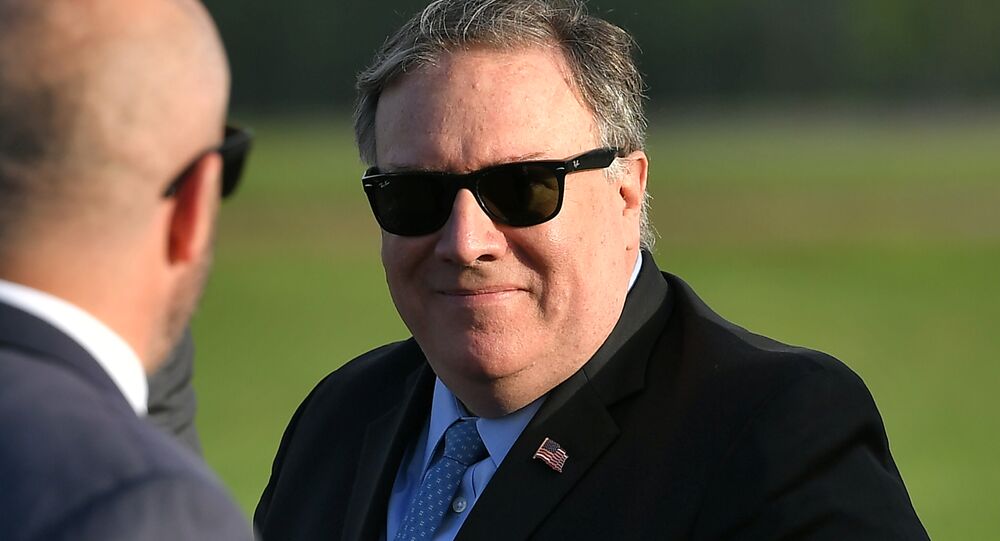 The US Secretary of State, while speaking on CNBC, said that the Islamic Republic of Iran is an active threat to American interests as it spreads chaos in the Middle East, however, the White House would "of course" welcome the opportunity to negotiate with Tehran.

Pompeo noted that he sees increased threats from Iran and that President Donald Trump's administration is reinforcing its capacity to respond to any offensive action from Iran. And that was the reason why the US decided to deploy a carrier strike group and a bomber task force, according to Pompeo.

"We've done all the right things to increase our security posture to the best of our ability," Pompeo said, "but we also want to make sure that we had deterrent forces in place, so in the event that Iran decides to come after an American interest — whether that be in Iraq, or Afghanistan, or Yemen, or any place in the Middle East — we are prepared to respond to them in an appropriate way. "

At the same time, Pompeo argued that despite the greater military presence the US has in the Middle East, Washington isn't looking for a fight.

"We're not going to miscalculate: Our aim is not war, our aim is a change in the behaviour of the Iranian leadership. We hope the Iranian people will get what they finally want, and what they so richly deserve," he said. "The forces that we're putting in place, the forces that we've had in the region before — you know, we often have carriers in the Persian Gulf — but the president wanted to make sure that, in the event something took place, we were prepared to respond to it in an appropriate way."

© AP Photo / Mindaugas Kulbis
US Sending More Warships, Patriot Missiles to Middle East Amid Escalation With Iran
Pompeo highlighted that he also prepared diplomatic approaches so that Trump had choices "in the event that the Iranians make a bad decision."

However, the diplomatic resolution apparently is not the only option, as Pompeo elaborated further.

"An attack on American interests from an Iranian-led force, whether it's Iranian proper or it's an entity that is controlled by the Iranians, we will hold the responsible party accountable. President Trump has been very clear about that: Our response will be appropriate." "Iran is the major destabilizing influence in the Middle East, and we aim to fix that."

Pompeo claimed that the US aims at targeting exclusively the country's establishment, having no intention to hurt people.

© AP Photo / Evan Vucci
Iran Reminds of US Lies Before Iraq Invasion, Hints US Official Behind Scaremongering
Even though diplomatic solutions, as well as "appropriate" responses, were prepared, Pompeo noted that the US still seeks a "peaceful diplomatic resolution."

"Of course we would welcome that call. Of course, we want a peaceful diplomatic resolution to each of these conflicts that we've talked about here today," he told CNBC. "That makes perfect sense."

Washington is currently waging a pressure campaign against Iran, the recent developments of which include deployment of the carrier strike group and the bomber task force in the region, designating Iran's Islamic Revolutionary Guard Corps (IRGC) as a foreign terrorist organization and a toughening of sanctions against Iranian iron, steel, aluminium and copper.

Trump Has Tougher Stance on Russia Than Any US President

"The actions that this administration takes I would put up against any in terms of our seriousness in pushing back on Russia and raising costs for them," Pompeo told the CNBC broadcaster.

The secretary of state noted that Moscow and Washington managed to cooperate in a number of issues, including Syria and Afghanistan.

"There are places that we'll have a value set that is radically different, that we'll have different views. In those places we're going to protect America's interests. But in those places where we can find common ground or an overlapping interest, it's completely appropriate, and, indeed, my duty and a necessity, that we work together," he explained.

The Venezuelan issue, which is a point of disagreement between Russia and the United States, is more complex, Pompeo added.

Earlier in the day self-proclaimed interim president Juan Guaido said that he asked his envoy to the United States to meet with Department of Defence officials to "cooperate" on a solution to the Venezuelan political crisis. The development came after a failed coup attempt which took place on 30 April and Guaido's subsequent statement that he would "perhaps" agree to US military intervention if it would help resolve the political crisis in his country.

© REUTERS / Carlos Garcia Rawlins
Russian Lawmaker Suggests US Sanctions on Venezuela Are a Bid to Instigate Chaos
The US, Canada, some Latin American and European nations were quick to recognize Guaido as the new legitimate leader of Venezuela and have supported him in his attempts to oust Maduro from power.