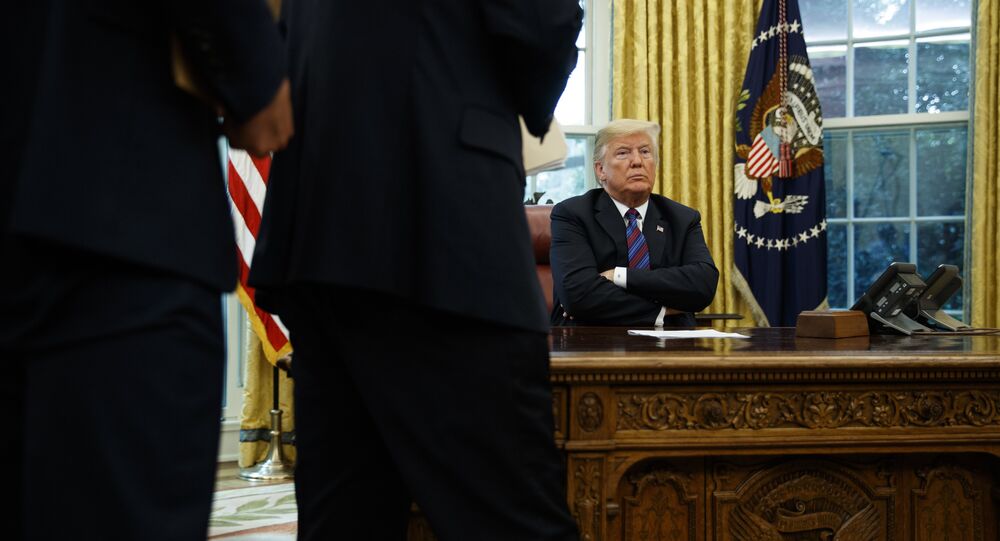 Tensions between Iran and the US escalated to their highest level in recent memory this week, with the US deploying a carrier strike group and nuclear-capable bombers near Iran's borders and warning that the navy may sail the ships into the Strait of Hormuz.

The White House gave authorities from Switzerland a phone number which Iranian leaders can use to reach President Donald Trump, an unnamed diplomatic source has told CNN.

According to the source, Swiss authorities will pass the number over to Tehran only if the Iranian government requests it, which is thought to be unlikely.

Switzerland's embassy in Tehran is tasked with representing US interests in the Islamic Republic, with the two countries breaking off relations in 1980 after the revolution against the Shah.

© AFP 2020 / US NAVY
US May Send Aircraft Carrier Into Strait of Hormuz as Tensions High - Commander
On Thursday, Trump urged Iran's leaders to phone him up to discuss the tensions between the two countries, saying he "would like to see them call" him, and that the US was "open to talk to them."

Earlier, Yadollah Javani, deputy commander of Iran's Revolutionary Guards, said that Iran had no plans to talk to the US and saw Washington as an "unreliable" negotiating partner. He added that the US was mistaken if it felt it could intimidate Iran into negotiations with a combination of military threats and sanctions.

Tensions between the two countries escalated sharply this week, with a senior cleric warning Friday that Iran could send the US's "billion-dollar fleet" to the bottom of the sea with missiles following the Pentagon's decision to send a carrier group to the Middle East to contain what Washington said was a threat from Iran against its interests in the region. The deployment followed back-to-back warnings by National Security Adviser John Bolton and Secretary of State Mike Pompeo that the US woudl retaliate against any Iranian attack against the US or its allies with "unrelenting force."

On Friday, the Pentagon announced that it had sent the USS Arlington amphibious transport dock and a battery of Patriot air defence missiles to its Middle Eastern command to join the USS Abraham Lincoln aircraft carrier-led strike group and multiple B-52 bombers which were deployed in region earlier this week.

© AP Photo / Evan Vucci
Iran Reminds of US Lies Before Iraq Invasion, Hints US Official Behind Scaremongering
Vice Admiral Jim Malloy, commander of the US Navy's Bahrain-based Fifth Fleet, said he would not rule out sailing the carrier group through the Strait of Hormuz, saying he wasn't limited "in any way to operate [the ship] anywhere in the Middle East," notwithstanding Iran's vast arsenal of domestically developed conventional missiles, including missile defence-evading cruise missiles.

The cycle of escalation between Washington and Tehran began last month, after the US classified Iran's Revolutionary Guards as a terrorist organisation, the first time that a state's armed forces has received this designation. Iran countered by designating the US military a terrorist entity. On 2 May, US waivers on the export of Iranian crude oil provided to over half a dozen major buyers expired, with Washington threatening to sanction countries doing business with the Islamic Republic.

On Wednesday, exactly one year after Trump unilaterally walked out on the 2015 Iran nuclear deal and reinstated tough sanctions, Iranian President Hassan Rouhani notified the remaining signatory states that they have 60 days to negotiate a deal to protect Iran's interests under the agreement, otherwise, Iran would resume higher uranium enrichment activity, he said.