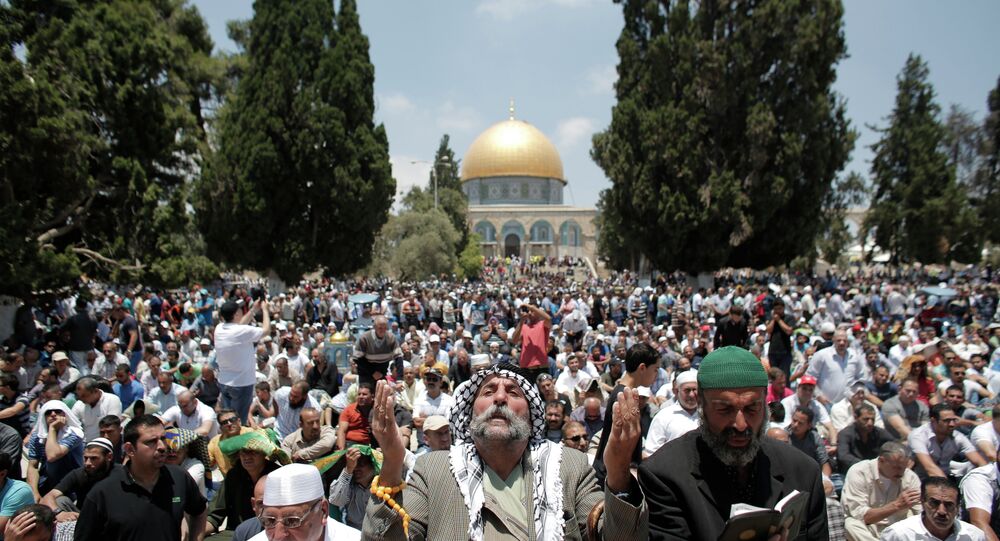 On 5 May 2019, the holy month of Ramadan began for Muslims around the world. It will end in the evening of 3 June. Muslims from Egypt, Morocco, Bahrain, Saudi Arabia, Iraq and Libya have described local customs and traditions during the holy month.

Ramadan, the ninth month in the Islamic calendar, is regarded by Muslims as the holiest month of the year as it is devoted to fasting, prayer, and compassion to commemorate the first revelation of the Quran to Muhammad, the founder of Islam.

During this period, Muslim believers spend extra time reading the Quran, the central religious text of Islam, and perform special prayers. From dawn to sunset they refrain from eating food, drinking liquids, and engaging in sexual relations, as well as what they consider sinful behaviour, such as cursing, lying, and fighting.

© Photo : Pixabay
Holy Month of Ramadan Begins Across Much of Muslim World
Despite strict Ramadan obligations, the holy month is filled with joy and happiness: Muslims are eating special holiday food after sunset, wearing beautiful clothes, meeting with friends and family members, as well as playing old traditional games.

Before sunrise, either musahharati, or nafar, or Abu Suhur — a person who awakens believers for an early meal and prayer — appears on the streets of Arab states. However, each country has its own peculiarities in how it celebrates the holy month.

Just an hour before dawn, a man with a stick or a drum appears on the street — this is the musahharati. He knocks on the door and wakes people up for the pre-dawn meal called "Suhur", which is eaten before the Fajr ("dawn") prayer.

At night, thousands of "fanouses" (lanterns) can be seen illuminating the streets. These are traditional decorated lamps with a candle or an electric torch burning inside. In Egypt a portrait of a famous politician or sportsman is now often put on a fanous' side. This year fanouses with a portrait of Egyptian football player Mohammed Salah, a Liverpool player, are the most popular ones.

During night hours, people spend a lot of time in cafes, buying juices, nuts, fruits, and traditional sweets. Neighbours have dinner together, while free meals are served everywhere. People devote a lot of time to charity, giving out food and money to those less fortunate.

Moroccan activist Maryam Hanin explains that "all pubs and bars are closed during Ramadan".

"However, harira soup is being cooked and served everywhere", she says. "This fragrant and rich soup has become a symbol of Ramadan".

© REUTERS / Amr Abdallah Dalsh
Beginning of Holy Month of Ramadan Across the Globe in Photos
12
In each region of Morocco every family has its own unique recipe for harira, passed down from generation to generation. Still, all recipes contain meat broth, chickpeas, lentils, fresh herbs, and a traditional set of spices, consisting of cinnamon, ginger, saffron, zira, cumin, garlic, and turmeric. Finally, vermicelli noodles are added to the dish.

At the end of a fast day, the Moroccans drink a glass of strong coffee with milk, eat a plate of harira with dates, and "shabakiyah" sesame biscuits for dessert. After that, men go on to perform the "maghrib namaz" at the mosque, while women continue preparations for the dinner at home.

In Morocco, the people are woken up by a "nafar", who plays a long copper trumpet.

Bahraini journalist Samar al Abiuki highlights that "during this month, family members lay aside all their affairs to eat 'iftar' (the evening meal) together".

"There is always a plate of 'harees' on the table", he adds.

"Harees" is porridge made of wheat, meat, and butter which is prepared according to an old recipe. It could be either liquid or dry.

In the middle of Ramadan, children are dressed in traditional clothes and sing traditional Arab songs. Neighbours give them nuts and sweets. Adults play musical instruments and dance. This tradition is called Karka or Gergaoon.

"Our main traditions during Ramadan [include] family iftars, decorated houses and streets, and burning fanouses", says Mariam al Harbi, Sputnik's guide in Saudi Arabia. "After the Taraweeh prayer, people pay visits to each other and gather at the table. This is called ‘Garakat'. It is also customary to make the Umra pilgrimage during Ramadan".

Taraweeh is an extra prayer performed by Sunni Muslims at night after the Isha prayer during the holy month.

"All people want to spend the first days of Ramadan with their families; they want to gather at their parents' houses while their neighbours are treating each other with all kinds of dishes", notes Iraqi journalist Wafa al Fatlawi.

In Iraq, the role of the Suhur "alarm clock" is performed by a man nicknamed Abu-Suhur. Each district has its own Abu-Suhur, who is paid with fruits and sweets for his "service".

"Men go to a cafe where they play 'mheibes'. This is the most popular game during Ramadan", Wafa al-Fatlawi points out.

The goal of the game is to find a ring. People are divided into two teams. The players of the first team are seated in rows. One person from the team, covered with a veil, imperceptibly transfers the ring to someone. Then the player from the second team must find out who has the ring. The game is accompanied by playing the drums and drinking of traditional soft drinks. During Ramadan, the Iraqis usually manage to hold a real 'mheibes' tournament.

Libya has long been famous for its sumptuous feasts on the streets during Ramadan, with tables resembling nothing less than a big open "buffet". After the overthrow of Libyan leader Colonel Muammar Gaddafi in 2011, the holiday treat became more modest, while in some areas people prefer to arrange meals at home for security reasons.

In all Muslim countries, Ramadan is a long-anticipated holiday — a time of prayer, gifts, delicious dishes, fun games, and traditions.

Holy Month of Ramadan Begins Across Much of Muslim World