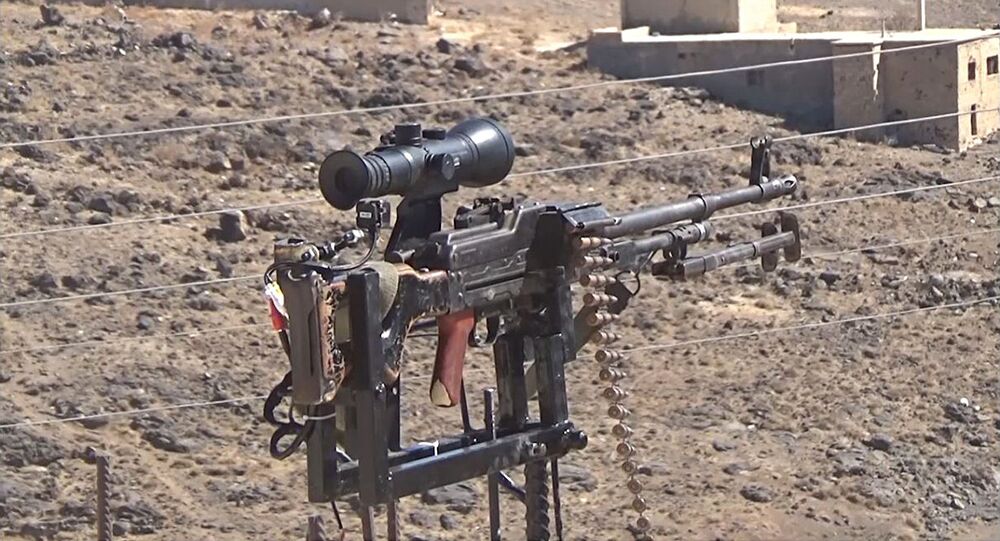 The engineering genius was prompted to invent his deadly weapon by tragedy, after Daesh (ISIS) militants killed, injured and kidnapped several dozen people in his village this summer.

Hamzah Salam, an engineer from the village of Shreihi in Suwayda, southern Syria, has built a custom automatic turret using a Russian PK machine gun which he dubbed an 'electronic sniper'.

"The automated system monitors the situation and, if necessary, opens fire. My 'electronic sniper' is very convenient: it can be controlled remotely or placed in autonomous operation mode," Salam explained, speaking to a Sputnik Arabic correspondent.

According to the engineer, the platform "can use any small-arms weapon, from a machine gun to a sniper rifle. Cameras transmit a signal to a computer, which analyzes the data received. Its main task is to track movement. The computer has several preset scenarios. If it notices odd behavior in a given quadrant, it will open fire. The system is fitted with a night-vision device, meaning round-the-clock security. The base of the gun is capable of rotating 360 degrees, resulting in maximum firing coverage."

Salam has had an interest in electronics since he was a child, and would repair lamps and kettles before moving on to making improvements to radios, and even inventing his own wireless microphone. In university, he focused on sensor technology. Now he is continuing his research on electronic keys and computer recognition systems.

© Sputnik / BASEM HADDAD
WATCH Daesh Terrorists Leave Behind Weapons ... and Beards in Southern Syria
Tragedy prompted the young man to invent and build his automatic machine gun. In July, Daesh (ISIS)* terrorists carried out raids in the city of Sweida, Syria and its environs, conducting suicide bombings and indiscriminately killing and abducting people in nearby villages in covert house-to-house attacks. The violence led to the deaths of at least 258 people, most of them civilians, and injured nearly 200 others. Salam's village of Shreihi suffered dozens of casualties.

The attacks prompted the Syrian military to step up its attacks against the terrorists. Last week, a Sputnik correspondent reported that the terrorists had been cut off from their freshwater supplies in the region's mountainous area and were leaving their weapons and beards behind as they fled in an attempt to blend with the local civilian population.