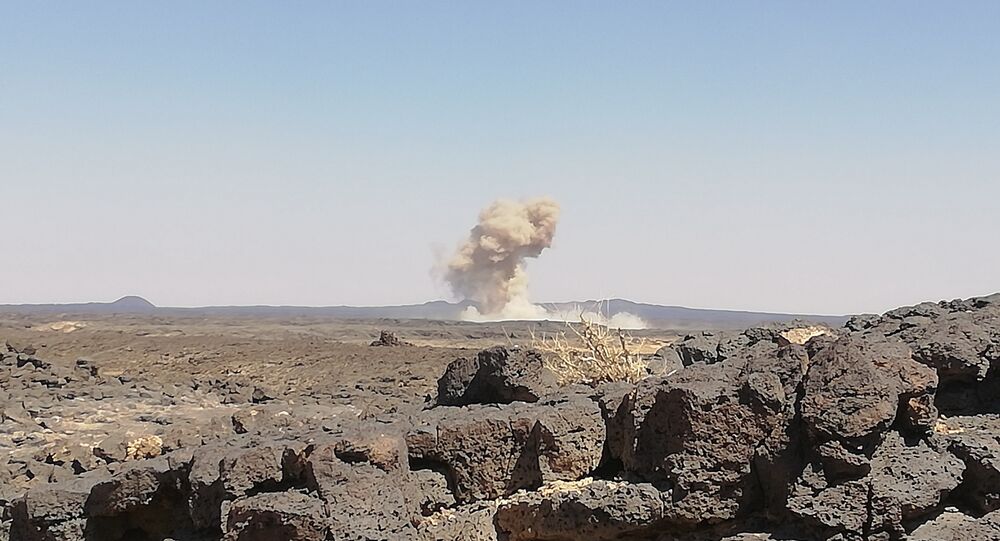 A Sputnik correspondent on the ground in As-Suwayda province says terrorist militants face destruction after being cut off from their supply routes.

In the course of the operation, aviation helped destroy enemy fortifications, eliminating dozens of militants. 15 Daesh (ISIS)* fighters were killed as they attempted to break out of the encirclement.

"The Syrian Army continues its offensive on the terrorists' positions. At present, the remnants of the terrorist group in this region have been cut off from their supply routes," the correspondent said.

Also on Wednesday, on the opposite side of the country, in Idlib governorate, the Syrian Air Force carried out over two dozen strikes against Turkistan Islamic Party militants, a military source in the Syrian Army told Sputnik Arabic.

According to the source, attack plans were formed after the receipt of intelligence about the militants' positions. "As a result, several terrorists were killed or wounded, and part of their positions and fortifications destroyed," the source said.

The Islamist extremist group, originating in western China, and outlawed in that country, as well as Russia, the United States, and many other countries, sent fighters to Syria in recent years, where it allied itself with al-Nusra** and other Islamist extremists. The force includes fighters from Chechnya and Uzbekistan. During the war in Syria, the group has been accused of war crimes, the active recruitment of children, and the frequent use of suicide bombers.

The situation in Idlib, now the last stronghold of anti-Assad militants, including Islamist terrorist groups, escalated in recent weeks amid provocations staged by the militants, and reports that Syrian government forces were preparing to liberate the territory. The presidents of Russia, Turkey and Iran, countries which serve as guarantors of the Syrian ceasefire, are expected to discuss the situation in Idlib at their upcoming meeting in Tehran on Friday.

** AKA al-Qaeda in Syria. Also outlawed.