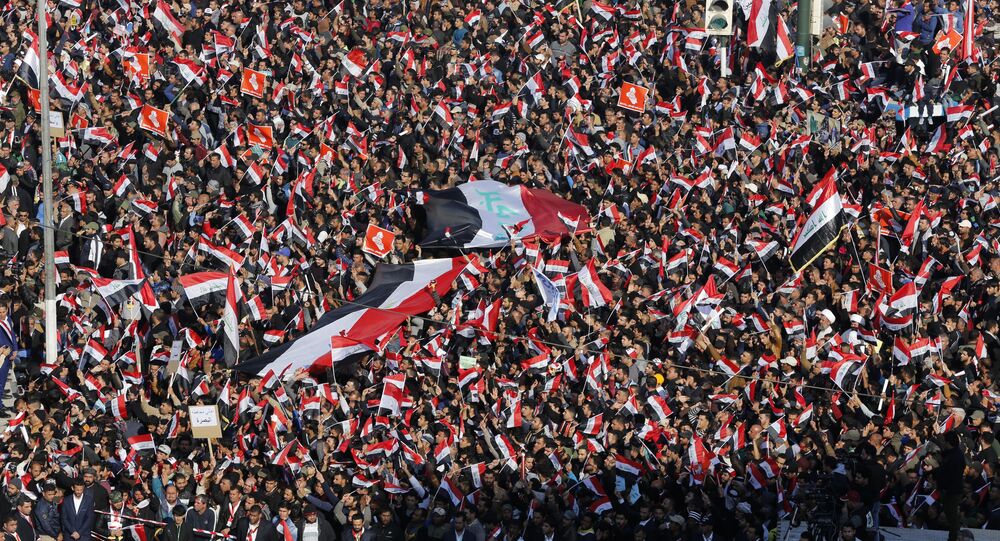 The popular figurehead stormed the election back in May on a fiercely anti-corruption platform, while pledging to rid Iraq of unwanted foreign - particularly US - interference.

The manual recount of votes cast in Iraq’s election held in May is now complete, with Shiite cleric Muqtada al-Sadr’s alliance holding on to all of the 54 seats that it initially won.

Iraq’s Independent High Commission released the results of the recount in the early hours of Friday, confirming that Sadr’s ‘Sairoon alliance’ has indeed snatched the popular vote.

© AP Photo / Karim Kadim
What You Need to Know About Parliamentary Election in Iraq
Now that the Sairoon alliance — a concoction of religious nationalists and secular communists —  has been confirmed as victorious, it is set to enter strenuous negotiations with members of parliament on the sufficient conditions for forming a new government. This comes nearly three months after national elections were held on May 12.

The manual recount was demanded by Iraq’s parliament, and amongst swathes of the population, following widespread allegations of voter fraud, which ruptured the country’s trust in the integrity of the electoral process. The May poll deployed a new electronic system for calculating votes cast, rather than by manual count, which some argue primed the system for vote-rigging.

Despite the manual recount, Baghdad’s incumbent Prime Minister, Haider al-Abadi, blasted the results, and asserted that there had been “unprecedented breaches” of the first election, rendering the recount null and void.

Abadi’s dismissal notwithstanding, the United Nations threw its weight behind the recount, hailing it is “credible,” and noting that it had been “conducted in a manner that is credible, professional and transparent.”

Despite the continued celebration amongst Western powers of Iraq’s post-2003 transition to democracy, many Iraqis remain weary and mistrusting of the country’s political class, with only 44.5 percent turning out for the election in May.

Who is Muqtada Al-Sadr?

Mr Sadr was sanctioned as public enemy number one by Washington following the 2003 Anglo-American invasion of Iraq. The Shiite strongman, who doubles up as a religious cleric outside of his political life, led a band of militiamen throughout the early days of the country’s occupation, called the ‘Mahdi Army,’ who attempted to vanquish coalition forces through armed force, causing many fatalities amongst Western soldiers.

Despite the best efforts of the Iraqi and US armies, Sadr and his men — who came to epitomize the post-invasion insurgency — continued to control large parts of Baghdad, most notably the so-called ‘Sadr city’ district, almost unhindered.

The cleric turned militia leader was such a thorn in the side of coalition forces, that by the year 2006 Newsweek had plastered his image on their front page, branding him “the most dangerous man in Iraq.”

Sadr still remains an unremitting critic of the US military presence in his country — which currently numbers at nearly 8,000 personnel — and the US-backed central government in Baghdad. According to scholars of the Middle East, much of Sadr’s legitimacy is derived from cocktail of nationalism and religiosity, which has made him a credible leadership figure, particularly in the eyes of Iraq’s poor, to whom he has promised the complete removal of US influence in Baghdad.

© CC0
Iraq to Stop Trading With Iran in US Dollars Due to Sanctions - Gov't Spokesman
Sadr is also notorious for his staunch opposition to the corruption that has plagued Baghdad’s central government since 2003. Most famously, he and his supporters staged a 2016 sit-in within Baghdad’s fortified ‘Green Zone’ — the centre of government established after the 2003 invasion — demanding greater government accountability. Eventually, Prime Minister Abadi was forced to reorganise his cabinet in what was perceived as an unprecedented act of appeasement.

Sadr will now set out to begin negotiating the formation of a new government with his former political rivals, including Iran-backed militia chief Hadi Al-Amiri, who came in second place in the parliamentary election and led the fight against Daesh in Mosul.

Whether the Iraqi populist will be able to reform Baghdad as he wishes remains to be seen, but one thing does appear certain: that his victory will cause somewhat of a headache for US foreign policy in the Middle East.

Politics in Iraq is About Getting a Position to Fill Pockets, Not Serve - Expert