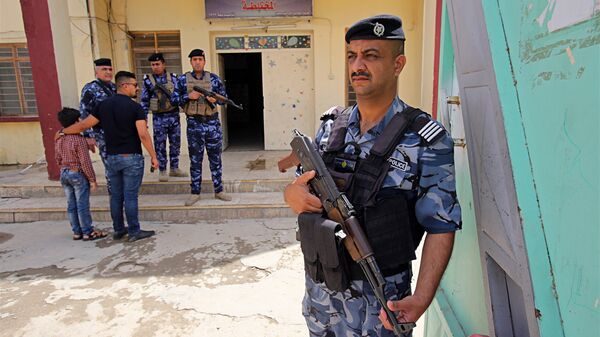 MOSCOW (Sputnik) - Iraqi citizens are on Saturday casting ballots in the first parliamentary election after the defeat of Daesh* in the country.

Meanwhile, Iraqi Prime Minister Haider Abadi has ordered to open the country's airspace and airports, which were shut down for 24 hours amid the ongoing parliamentary election, the prime minister's media office said Saturday on Twitter.

Ahead of the election, a committee formed by Abadi ordered the shut down of airports beginning from midnight Friday until midnight Saturday.

The parliament, which is the Council of Representatives, is the main legislative body in the country. It has 329 seats, nine of which are reserved for representatives of ethnic and religious minorities, including five seats for Christians. The remaining 320 seats are distributed among 18 Iraqi provinces.

In line with the Iraqi legislation, one member of the parliament represents 100,000 people, and women should occupy 25 percent of all seats.

When the sun rises again in Baghdad, Iraqis will go to the polls & decide what the next four years will look like. #IraqElections2018 #العراق_ينتخب pic.twitter.com/2McHYHGe5Y

The election is held every four years. The new lawmakers are elected no later than 45 days before the previous parliament completes its duties. The vote for a lawmaker is cast by direct secret ballot on the single day of universal voting designated by order of the Presidential Council.

The responsibility for organizing elections rests with the Supreme Independent Election Commission (SIEC) of Iraq.

The election is based on a proportionate system. Once the election threshold is met, mandates are distributed among the lists of candidates in proportion to the votes cast for them. Iraqis living abroad also have the right to vote.

In order to prevent to prevent the election tampering, automatic voter registration (AVR) was introduced. A new electronic voting system that uses fingerprint identification and sends the data from regional polling stations to the capital via a secure connection was tested in Iraq on Saturday at the parliamentary election.

After voters' IDs have been scanned, they can mark the results on the ballots, which will then be put into a scanner that registers the results. The system is not only secure, but also very quick.

"Each person needs 7 seconds [to file the results]," an official present at one of the polling stations explained.

In 2013, the authorities introduced a new method of distributing mandates – the Sainte-Lague method. It increases the chances that small parties will be elected to the parliament. According to this method, seats are distributed consecutively and are occupied by those who have a higher coefficient calculated on the basis of a formula.

READ MORE: US Is Responsible for Discord in Iraq — Iraqi Ex-Defense Minister

Within 30 days since the start of the first session, members of the Council of Representatives must choose a new president of the country among its members. In the next 15 days, the parliamentary bloc that won the elections should submit for the approval of the president a candidate for the position of the prime minister.

At 7:00 Am polls opened for #voting#people in #KurdistanRegion and #Iraq heading to the #Polling centers to cast their #voices #IraqElections2018 pic.twitter.com/y1D9ClrUWd

The Council of Representatives approves the national budget, monitors the activities of the executive, and exercises certain other powers, for instance, approving the heads of the Federal Court of Appeal, the Prosecutor General’s Office, the Department of Court Inspections, and the chief of the Army General Staff. It also ratifies international agreements. By an absolute majority vote, the Council of Representatives can pass a no-confidence motion against any government minister and relieve the president of his duties before his term expires.

Today is the last day you can vote in the #IraqElections2018 if you live abroad. I urge all the Kurdistan diaspora to take the step and let your voice be heard in this election.https://t.co/ukNhyV0v4Z@KRG_USA @najatga pic.twitter.com/lTIfyqed68

​*Daesh — a terrorist group, banned in numerous countries, including Russia