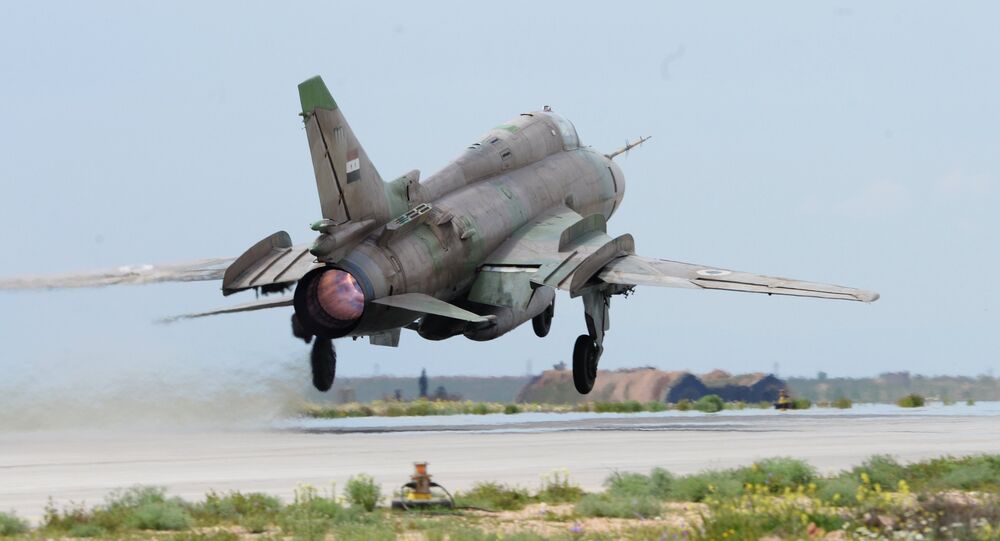 Israel shot down the Syrian Air Force Sukhoi fighter jet on Tuesday in response to what Tel Aviv claimed was a violation of its airspace in the Golan Heights.

Daesh (ISIS/ISIL)* has released photos of what it alleges is the pilot and the wreckage of the Syrian warplane shot down in southern Syria by an Israeli Patriot missile, Reuters has reported.

The SITE Intelligence Group, engaged in the monitoring of terrorist activity, has released what are believed to be two of the images on its Twitter page. The images' authenticity has yet to be independently verified.

Daesh reportedly posted a total of four photos, with one of them (not shown) showing a mutilated body the group claimed to be that of the plane's dead pilot.

In a video released by Haaretz, a group of what are assumed to be Daesh fighters inspect the aircraft shortly after it crashed, shouting "Allahu Akbar" as they walk around its flaming wreckage off-camera.

© Photo : Instagram / idf
IDF Reveals Name of Woman Officer Who Downed Syrian Jet Over Golan Heights
A Syrian military source earlier confirmed to Sputnik that Colonel Omran Muri, one of the Sukhoi's two-man crew, was killed after the plane was downed. The fate of the co-pilot remains unknown.

The IDF shot down a Syrian Air Force Sukhoi fighter plane on Tuesday, claiming that the aircraft had violated Israeli airspace in the Golan Heights area. Damascus rejected the IDF's claims, and said that the aircraft was carrying out a mission against Daesh militants in the country's south on Tuesday morning. Syrian officials have cited the incident as evidence of Israel's suspected support for terrorists in the so-called Golan disengagement zone.

A small pocket of Daesh militants remains concentrated in southwest Syria bordering the Golan Heights, a Syrian territory occupied by the Israeli military since 1967 and annexed in 1982. Tensions near the Golan Heights have escalated in recent weeks amid the Syrian military's effort to free southern Syria from militant groups. Militants not affiliated with Daesh or al-Nusra began to surrender and evacuate from southern Syria on July 15 following negotiations faciliated by the Russian Reconciliation Center for Syria.