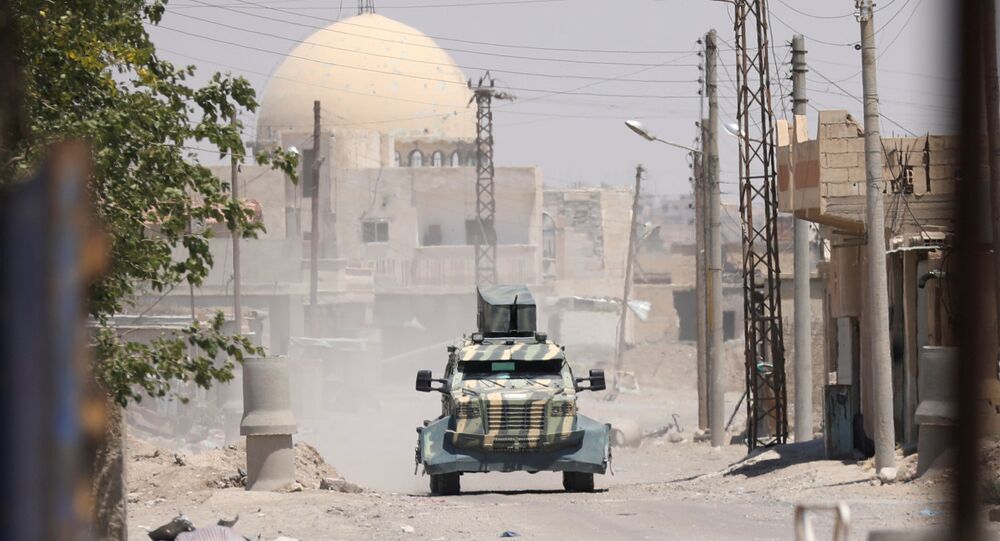 The Syrian government launched a full-scale offensive in the country’s southwestern regions earlier this month in order to regain control over its border with Jordan and with the disputed territory of the Golan Heights.

Russian Foreign Minister Sergei Lavrov told the United Kingdom's Channel 4 News broadcaster on Friday that some states used the Syrian conflict in their own interests, getting into the war-torn country and trying to redraw the map of the region by force.

"It is a war, which started by mistakes made on the part of everyone including the Syrian government. I believe these disturbances could be handled politically at the early stage but we have now at our hands what is the result of outside forces having tried to use the situation in order to reshape the map of the Middle East and Northern Africa by trying to get into Syria without any invitation and trying to promote their own agenda there," he stated.

The Russian minister also claimed that the remnants of Nusra Front* and Daesh* terrorist organizations attempt to obstruct the the de-escalation process in southern Syria.

"Some remnants of ISIL are very much there. Jabhat al-Nusra is still there. They are now preventing the deal on southern Syrian de-escalation area from [being] implemented fully," Lavrov said.

However, according to the Reuters news agency, a state department official, who addressed the issue, said Washington can't confirm reports of ceasefire in the southern regions of Syria.

Previously, Reuters reported, citing an official Jordanian source, that there were reports of a ceasefire in southern Syria, which would lead to "reconciliation" between the opposition militants and Damascus. However, the source didn't specify if the ceasefire concerns the territory where the government is currently conducting an offensive.

© AP Photo / APTV
US Sends Signal to Moscow by Halting Aid to Rebels in Syria – Israeli Analyst
The news comes just a day after the Syrian army reportedly liberated the city of Al Hrak and a number of other settlements in the southwestern province of Daraa.

Last week, the first major militant group from the Free Syrian Army — the Omari Brigades — opted to side with government forces following talks with representatives of the Russian reconciliation center. The leader of the group announced in a statement, that they would fight against militants from the Nusra Front and Daesh terrorist organizations together with the Syrian army in the south of the country.