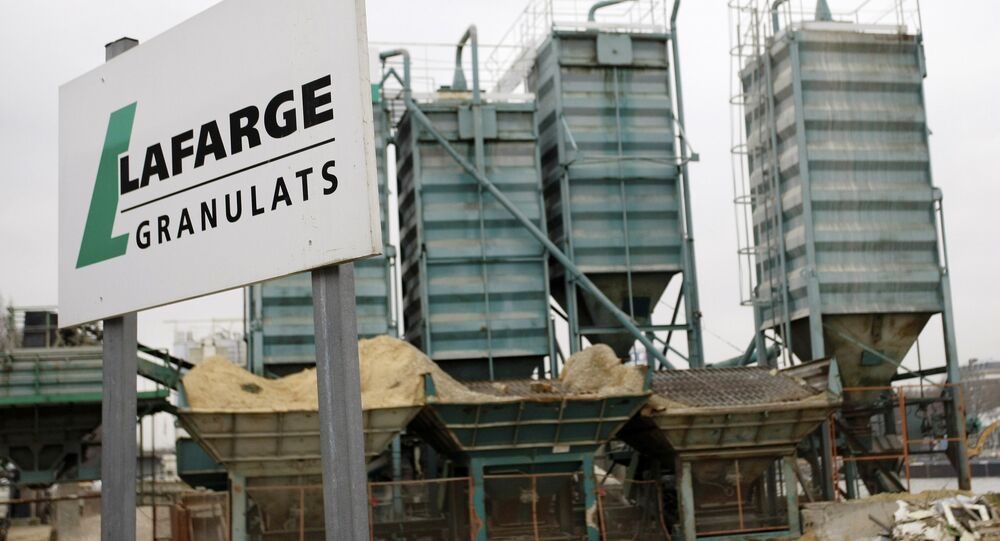 Lafarge is a French industrial company specializing in three major products: cement, construction aggregates, and concrete. Between 2013 and 2014, the company's Jalabiya plant operated on Daesh*-controlled territories in northern Syria.

The firm has been accused of financing terrorist organization and of crimes against humanity in Syria. The judges have also charged the holding company with violating an embargo and endangering the lives of others, Reuters reported, citing judicial sources.

© REUTERS / Jonathan Ernst
Macron Proposes to Create International Coalition Against Terrorism Financing
The probe was opened in 2017 by the Paris prosecutor's office. The investigators were interested in conditions, under which the plant of the cement manufacturer was allowed to operate and freely moved its employers and goods on Daesh-controlled territory in Syria.

Lafarge management is suspected of paying up to 13 mln euros ($16 million) to Daesh militants and other armed groups in order to secure their business interests and keep the plant running after other European companies had left the war-torn country.

According to the reports, at the moment eight former and current executives of Lafarge, including former CEO Bruno Lafont were indicted.

Addressing the issue, the company announced it would appeal the opening of the court investigation.

"Whilst admitting that the system of supervision of its Syrian subsidiary did not allow the company to identify wrongdoings at the level of this subsidiary, which were the result of an unprecedented violation of internal regulations and compliance rules by a small group of individuals who have left the group, Lafarge SA will appeal against those charges which do not fairly represent the responsibilities of Lafarge SA," the company said in a statement.

© AP Photo / Lefteris Pitarakis
Jihadists With Benefits: How French Taxpayer Money Landed in Pockets of Daesh Fighters
Chairman of the Board of LafargeHolcim, French-Swiss parent company of Lafarge SA, Beat Hess, stated that the frim regretted what had happened in Syria and had swiftly acted to rectify the situation after learning about it, stressing that "none of the individuals put under investigation" remained with the company.

Non-governmental organization European Center for Constitutional and Human Rights (ECCHR), which was one of the initiators of the criminal complaint against the company, welcomed the news of indictment.

"This is a worldwide premiere for a parent company to be indicted for complicity in crimes against humanity, marking a decisive step forward in the fight against the impunity of multinationals operating in armed conflict zones. It is also the first time that a multinational parent company in France is indicted for the activities of one of its subsidiaries abroad," the ECCHR said in a press release.