Ekaterina Blinova
All materialsWrite to the author
By halting aid to Syrian rebels in the south, the US is sending a signal to Moscow ahead of the meeting between Russian President Vladimir Putin and his American counterpart Donald Trump, French-Israeli geopolitical analyst Mylene Doublet O'Kane told Sputnik, adding that the sides are likely to discuss Tehran's presence in the region.

The suspension of US military aid to rebels in the south of Syria amid the Syrian government's offensive could be part of a bigger game, Mylene Doublet O'Kane, a French-Israeli academic and independent geopolitical analyst, told Sputnik.

Earlier, Reuters reported citing sources on the ground in Syria, that Washington had made it clear to the Syrian rebels that they should not expect the US to support and shield them.

The analyst presumed that Washington might have "ceded" control of the southwestern part of Syria's territory to Moscow and Damascus, while seeking Russia's assistance in containing Iran's "expansion" in the region.

Both Tel Aviv and Washington continue to urge Tehran to pull out of Syria, threatening to take measures against what they see as an Iranian military buildup in the region. For their part, Damascus and Tehran insist that the Iranian presence is limited to military advisers on the ground.

Referring to the Syrian Army's southern offensive, O'Kane emphasized Russia's crucial role in the ongoing developments on the ground.

"Having been somehow pushed into a campaign to recapture southern Syria which has mobilized and dispatched quite considerable forces in order to strike against the US-backed and armed opposition around Daraa, it appears that Bashar al-Assad is taking a significant risk, since without the Russian support received in recent days, the southern offensive would have turned into a total disaster," she opined.

Israeli Analyst Explains Why Iran Unlikely to Withdraw From Syria
For his part, Israeli political commentator Avigdor Eskin suggested that the southern advance by the Syrian government's military personnel was "coordinated" with Israel and the US given that neither Iranian nor Hezbollah forces were included in the military operation.

"Israel will not prevent Assad's forces from taking positions near the [Israeli] border if the Iranians and Hezbollah are not there. We can see it as some positive developments," Eskin stressed, speaking to Sputnik on June 28.

O'Kane believes that the issue of the Iranian presence in the region could become one of the key issues during the upcoming negotiations between US President Donald Trump and Russian President Vladimir Putin on July 16 in Helsinki. Ahead of the long-anticipated summit the Syrian Army should tread carefully while proceeding with its southern military operation, the geopolitical analyst noted, warning that now the regional balance is especially fragile. 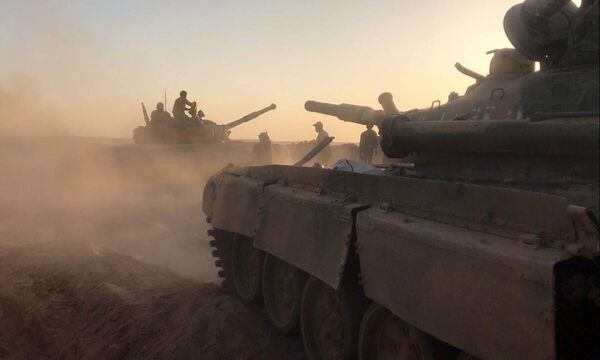 Syria's Oil and Pipelines in Focus of Warring Parties

The analyst highlighted that the present disposition of forces in the region correlates strongly with the location of oil fields and energy routes running through Syria.

"The control and access to energy interests and pipeline routes are at stake in the Middle East with Syria being both an energy producer but also a decisive energy transiting territory," O'Kane underscored. "Syria possesses a network of pipeline connectors, through which energy running from Iran and Iraq transits (an East-West axis). A South-North axis also includes transiting energy coming from the Gulf countries. Both axis elect several connecting points, notably in northern Syria — for instance in the region of Manbij — that all together define a map of strategic locations to control."

Analysts Explain Trump's 'Green Light' to Syrian Army's Southern Advance
Given this, it is hardly surprising that major clashes between the Syrian pro-government forces and the US-backed Kurdish and rebel factions are occurring around these strategic zones, including cities in close proximity to oil fields along the Euphrates River (Deir ez-Zor, Raqqa, Al Thuwara, etc.), O'Kane highlighted.

She pointed out that about two thirds of Syria's energy resources, which are concentrated on the eastern part of the Euphrates River, remain under the control of the US-backed forces.

The geopolitical analyst, commenting on the alleged evacuation of Daesh (ISIS/ISIL)* field commanders via US military aircraft in al-Hasakah reported by the Syrian Arab News Agency (SANA) on June 26, suggested that the evacuees could be "US-backed local rebel commanders" that are "currently being heli-relocated in the vicinity of al Shaddadi; where the US has had a military base since late 2017 in close proximity to the al-Shaddadi oil fields.

The views and opinions expressed by Mylene Doublet O'Kane and Ekaterina Blinova are those of the contributors and do not necessarily reflect those of Sputnik.