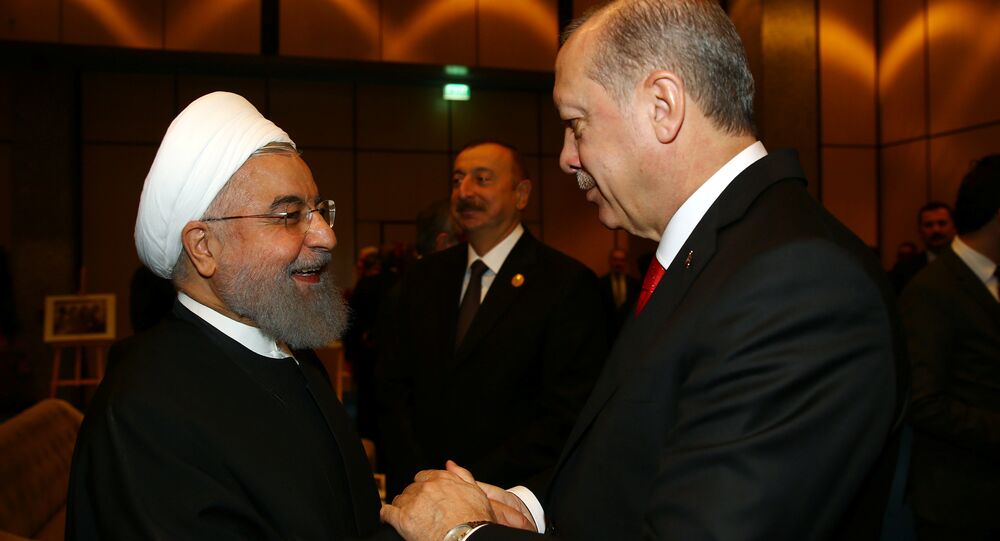 US ‘Will Lose’ From Leaving Iran Deal, Tehran Abiding to Agreement – Erdogan

US President Donald Trump announced plans to withdraw from the Iran nuclear deal on Tuesday, drawing criticism from Iranian President Hassan Rouhani and others who view the move as an escalation and a potential threat to all of the progress made via talks in 2015.

© AP Photo / Ronald Zak
IAEA Confirms Iran Fulfills Nuclear-Related Commitments Despite US Exit From Deal
Turkish President Recep Tayyip Erdogan said on Wednesday that the US “will lose out” from Trump’s decision to exit the Joint Comprehensive Plan of Action (JCPOA), according to Turkey’s state-backed Anadolu news agency, citing Erdogan’s interview with CNN, which is scheduled to be broadcast later today.

The Turkish president hailed the deal as ending years of “negativity” and “raising hope all around the globe.”

He went on to criticize Trump for exiting the deal, potentially undoing years of hard work and progress.

“At the drop of a hat, turning this deal around and retreating from this deal, possibly is not just going to impact the region but also the entire world. This is not how international mechanisms work, international covenants and international conventional cannot be annulled at will,” President Erdogan told CNN on Wednesday.

© AFP 2021 / TIMOTHY A. CLARY
US' Exit From Iran Deal Will Increase Market Volatility – Investment Strategist
Erdogan then warned of the international economic implications of the US’ withdrawal from the deal, saying "The U.S. might gain some certain positives out of the withdrawal from this or the rising oil prices, but many of the countries in poverty will even be hit harder and deeper. We don't need new crises in the region."

When asked if the US’ exit from the JCPOA could lead to a geopolitical war, the Turkish president said:

"That's not what we would wish to see of course, this is not something would like to expect. However, in my view, the U.S. will be the ones to lose. Iran will never compromise on this agreement and will abide by this agreement until the end."

Earlier today, Russian Foreign Minister Sergei Lavrov said Moscow is committed to preserving to the agreement. Meanwhile, Tehran condemned Washington’s decision to withdraw from the deal, and insisted that it hadn’t violated the terms of the agreement.

The deal was reached in 2015, and resulted in the lifting of economic sanctions against Iran in exchange for restrictions and access to its nuclear program, which it claims only serves “peaceful” energy purposes and is not aimed at developing nuclear weapons of mass destruction (WMDs.)

In Trump We Trust: Global Oil Prices Skyrocket as US Exits Iran Deal