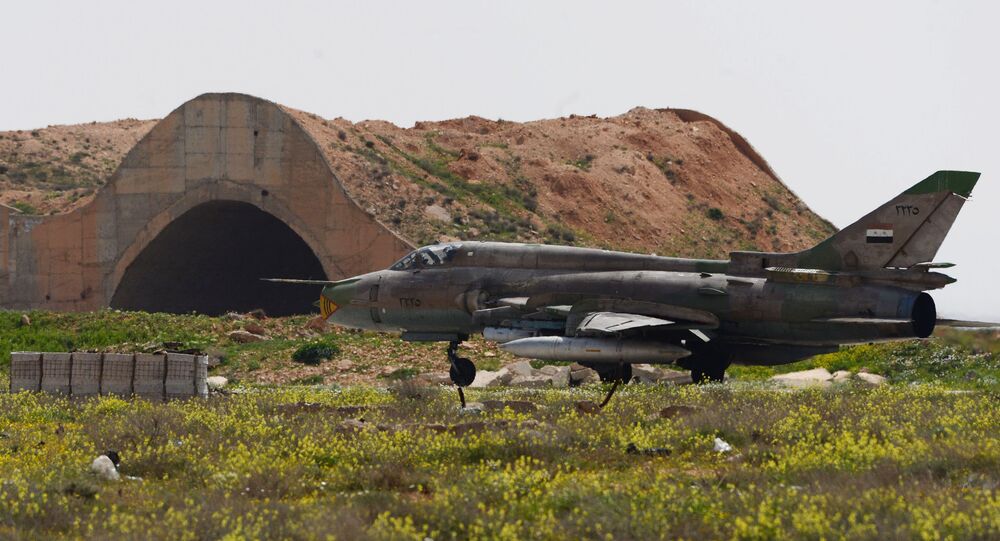 A commander of a military alliance that supports Syrian President Bashar al-Assad told Reuters earlier that the malfunction was caused by "a joint electronic attack" by Israel and the US that targeted the Syrian radar system.

According to the SANA news agency, a false alarm of an airspace violation triggered the launch of air defense sirens and several interceptor missiles in the early hours of Tuesday, but there was no external attack on Syria.

Furthermore, a source at the Beirut Rafic Hariri International Airport told Sputnik that the Israeli Air Force jets could not strike the base since they had not entered the Lebanese airspace at the time of the suspected strike.

© AP Photo / Hadi Mizban
WATCH: Iraqis Burn US Flag at Protest Against Attack on Syria
Earlier in the day, the Syrian media reported that the country's armed forces repelled a missile attack on the Shayrat air base in the Homs province. A Syrian military source told Sputnik that nearly 10 missiles were intercepted. A Pentagon spokesman said that the United States was not conducting military activity in the area.

Following the reports, a UK Defense Ministry spokeswoman told Sputnik that the UK was not conducting any military operations in Syria on the night of Tuesday.

© AP Photo / Mosa'ab Elshamy
US Wants to Replace Its Troops in Syria With Gulf States' Militaries - Reports
According to the Russian Defense Ministry, the three countries fired over 100 cruise and air-to-surface missiles, most of which were shot down by Syrian air defenses.