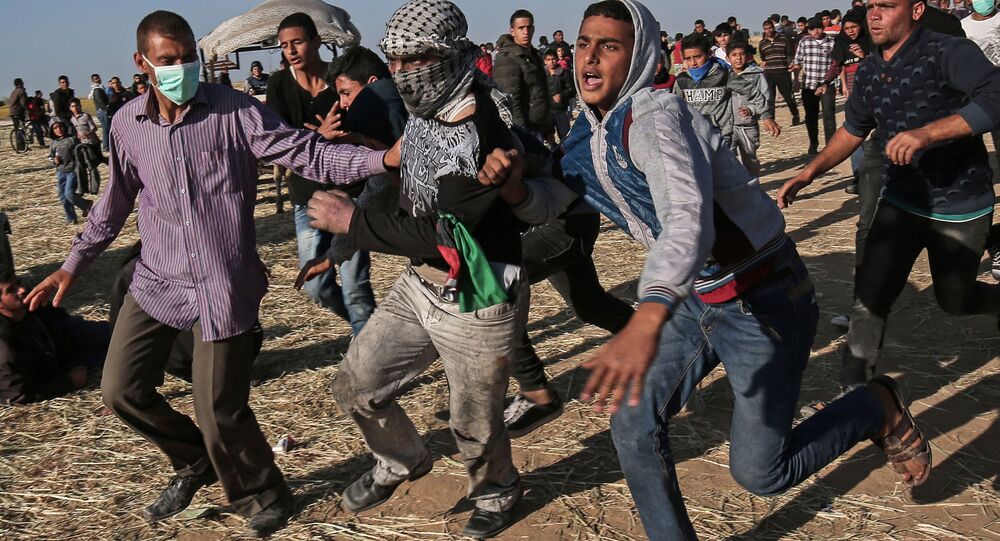 WASHINGTON (Sputnik) - Violent protests by Palestinians in the Gaza Strip prompted a warning against the use of excessive force and a call for peaceful demonstration in what has become a weekly challenge to a barrier that separates Israel from the Hamas-ruled territory, United Nations spokesman Stephane Dujarric told reporters on Friday.

"We urge all parties to exercise maximum restraint and avoid confrontation," Dujarric said.

The spokesman added that UN officials had been in contact with interlocutors on both sides, emphasizing "the need to allow people to demonstrate peacefully."

The Hamas-run Gaza health ministry, as quoted in a report by the Times of Israel, said on Friday evening that six men were killed and 922 injured people were taken to hospitals and field clinics.

© AFP 2021 / Said Khatib
Gaza Violence: 7 Palestinian Protesters Reportedly Killed, Hundreds Injured in Clashes on Border With Israel (VIDEO)
Local media estimated a turnout of about 20,000 protesters, less than the estimated 30,000 crowd size the previous Friday, when at least 20 were killed by Israeli gunfire and more than 1,000 injured. Palestinian officials plan to hold similar protests every Friday.

Israeli officials claimed the smoke provided a diversion in which groups of protesters stormed the fence in an attempt to open a fissure that would allow the crowd to push into Israel, according to the report.