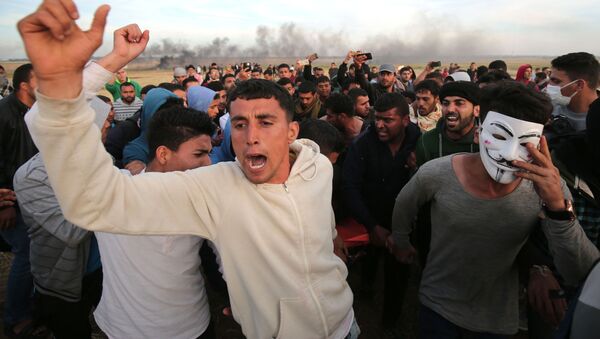 Seven Palestinians have been reportedly killed after clashes erupted along the Gaza-Israel border where 20,000 Palestinians came to protest for the right to return to their previous territories in the Jewish state. The Israeli army uses firearms and anti-riot means against the participants.

A new round of the six-week-long Palestinian protests in the border area between Israel and Gaza Strip has grown violent. According to the media reports, at least seven Palestinians have been killed, with a 16-year-old Palestinian teenager being among victims.

Gaza Health Ministry spokesman Ashraf Kidra told Sputnik that as of 19:00 p.m. local time [16:00 GMT], there are 780 people injured with bullets and gas in clashes with Israeli servicemen.

The Israeli military has reported about thousands of rioters, against whom they use open fire and special anti-riot means.

The IDF has located five spots of violent clashes along the Gaza fence. Palestinian protesters burn tires, sending smoke billowing at Gaza-Israel border; Israeli troops fire back sporadically. As some protesters moved closer to the fence the Palestinians mean the smoke to block the view of the IDF snipers on the other side of the border.

Attacks by the occupation forces on the peaceful protesters east of the #Gaza Strip in the #GreatReturnMarch pic.twitter.com/ZDd3pI7XID

Several shots have been heard from Israeli positions. The military renewed a warning that it will not allow a breach of the fence, promising to respond  with live fire, tear gas and rubber bullets. Earlier, a Muslim preacher in one of tent camps near the Gaza border urged protesters not to approach the fence.

The Hamas-backed anti-Israeli standoff, which ended with clashes on March 30, has already left at least 20 Palestinians dead and more than 1,500 wounded as Israeli soldiers opened fire and used tear gas. Ahead of these rallies the United Nations human rights office called on Israel to ensure that its army forces do not use excessive force against protesters.

Ahead of the upcoming demonstration, Palestinian Islamic fundamentalist movement Hamas, which is marked in Israel as a terror group, has revealed information about payouts to the families of those killed or wounded in clashes.

According to their official website, Palestinians critically and moderately wounded in the protests received $500 and $200, respectively. Families of those killed were given $3,000. As the statement reads, the retribution is part of the organization's "social and national responsibility to strengthen the steadfastness of our people in its struggle for return, freedom and breaking the siege.”

The Israeli Defense Forces (IDF) have reported that violent riots have taken place at the Gaza fence, as protesters threw Molotov cocktails and rocks at them, as well as fired at Israeli soldiers and tried to cross the border.

Under the cover of the riots in Gaza, Hamas operatives have been attempting to cut, burn, and shoot their way through the border fence in order to infiltrate Israel. By defending the border fence, the IDF is protecting civilian homes pic.twitter.com/7JhdJ6Am9d

Several human rights organizations have claimed that the IDF's response has been disproportionately violent, as, according to them, the Israelis opened fire at “unarmed civilians,” providing video via social media.

The UN Security council also condemned Israel after an emergency meeting, accused it of disproportionate and violent reaction against the demonstrators and called for an independent transparent probe into the killings. However, the Israeli Defense Minister rejected the accusations, as well as excluded the possibility of such an inquiry, praising his military.

Avidor Liberman told Israeli Army Radio, “From the standpoint of the Israeli soldiers, they did what had to be done. I think that all of our troops deserve praise, and there won’t be any inquiry.”

Meanwhile Israel’s envoy to the UN, Danny Danon, issued a letter to the UNSC, calling for “a clear message” to be sent to the Palestinian leaders behind the standoff. He accused Hamas and other Palestinian organizations of “exploiting women and children as human shield” for armed terrorists.

“It is imperative that the Security Council send a clear message to the Palestinian leadership insisting that it put an end to these riots that only serve to sow violence and instability,” his statement reads according to the Jerusalem post.

According to Danon, Hamas instigates snipers against the IDF, as well as prepares Molotov cocktails.

The rallies, inspired by Hamas, commemorate “Land Day” when Arabs honor the six Palestinian protesters who were shot and killed by the IDF in 1976. The protests, which Hamas claims are peaceful, will culminate on May 15th, the 70th anniversary of the establishment of the State of Israel, when many Palestinians had to leave their homes. Their descendants represent the majority of Gaza residents.

It has been planned that after weeks of sit-ins, the protesters intend to cross the border fence, a move strongly opposed by the Israelis. Despite claims that they don’t want violence, the IDF has repeatedly warned  that they will fire if attempts are made at “mass infiltration” or if the demonstration grows violent and the fence is damaged.

The Jewish state has reportedly doubled its military presence along the border. More than 100 snipers have been deployed, as well as Special Forces and paramilitary police units for riot control.