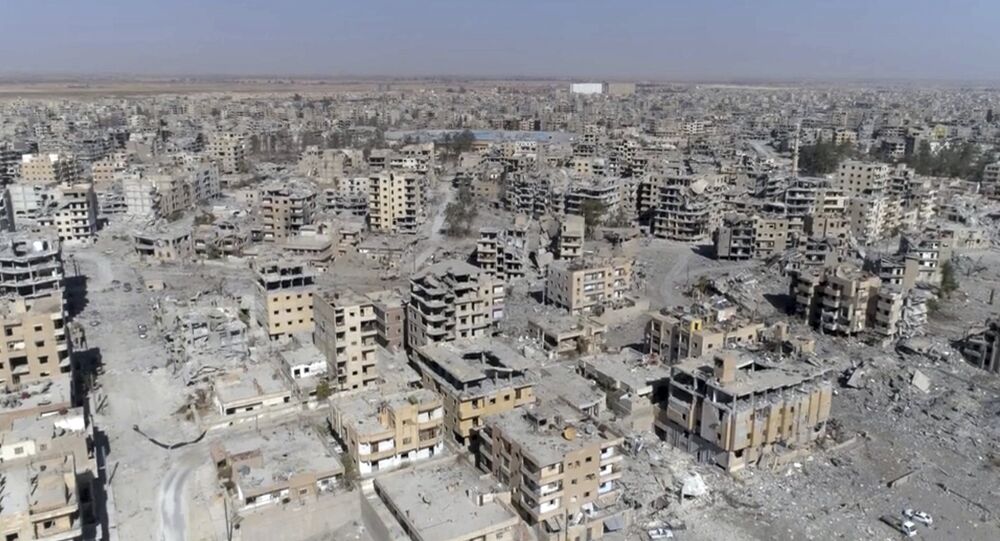 Col. Gen. Sergey Rudskoy, Chief of the Main Operational Directorate of the Russian General Staff, commented on the situation in Raqqa, Syria and Eastern Ghouta.

The Situation in Raqqa

The native Arab population began an uprising against US-controlled units in the suburbs of the Syrian city of Raqqa, the Chief of the General Staff Sergei Rudskoy said.

"The command of the Syrian Democratic Forces and local governments, appointed by the Americans, do not cope with the need to resolve humanitarian problems. The native Arab population is subjected to repression and punishment, forced mobilization is being carried out. This causes sharp discontent among local residents," he said.

The infrastructure of Raqqa, Syria, where nearly 95 thousand people have returned, is completely destroyed, according Sergei Rudskoy.

"According to the UN Office for the Coordination of Humanitarian Affairs, a disastrous humanitarian crisis has developed in Raqqa," Rudskoy said.

© REUTERS / Zohra Bensemra/File Photo
US-Led Coalition: No Value in Russia's Proposal for UN Commission on Raqqa
He noted that because the water main isn't working, there are serious problems with water supplies. Water is often taken directly from the Euphrates, which increases the threat of the spread of infections and epidemics.

Raqqa was taken over by the terrorist group Daesh* in 2013, which went on to declare it the capital of their self-proclaimed caliphate in 2014. In late 2016, the Syrian Democratic Forces (SDF), with the support of the US-led coalition, started an operation aimed at freeing the city from the militants' grasp. In October 2017, the SDF announced the full liberation of the city, which was later confirmed by the US-led coalition.

According to the Russian Defense Ministry, the United Nations confirmed the withdrawal of refugees from Eastern Ghouta, carried out in line with international law.

There have been no military actions in Syria's Eastern Ghouta region in the past seven days; most of the region is controlled by Damascus, Col. Gen. Sergei Rudskoy stated.

"The Russian Reconciliation Center and Syrian authorities are carrying out an unprecedentedly large-scale humanitarian operation in the suburban Damascus region of Eastern Ghouta," the official added.

Militants in Syria are further attempting to carry out provocations with the use of chemical weapons in order to blame Damascus for chemical attacks on civilians, Sergei Rudskoy said Saturday.

"I want to draw your attention to the ongoing attempts of the militants to carry out provocations with the use of poisoning substances to accuse government troops of using chemical weapons against the local population," Rudskoy said.

© REUTERS / Baris Kadirhan/Depo Photos
Erdogan Vows to Eliminate PKK, YPG, PYD, Urges US to Refrain From Provocations: "Ankara Won't Put Up With It for Long"
He added that the US instructors had prepared several groups of militants at a camp near the city of al Tanf to carry out provocations with the use of chemical weapons. According to Rudskoy, the toxic agents have been delivered to southern Syria under the guise of a humanitarian aid convoy.

He added that 20 containers with chlorine were delivered to settlements located 25 kilometers (15 miles) to northwest of Idlib, with Nusra Front* terrorists preparing an attack in the area.

Rudskoy noted that the provocations were also aimed at creating a pretext for US strikes against the Syrian government.