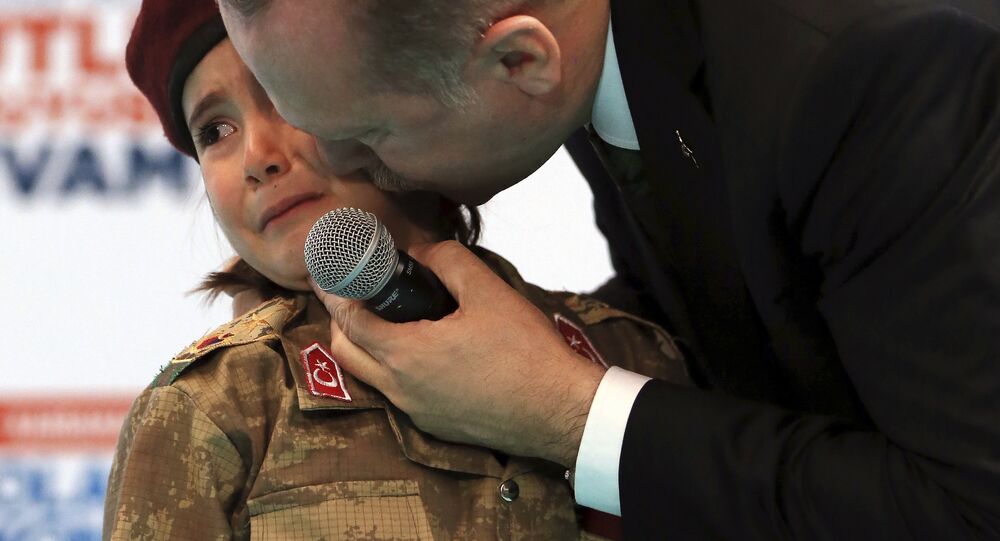 The Turkish head of state was visiting an event aimed at bolstering support for the military campaign in Afrin against Kurds forces, when he spotted a little girl, dressed in military uniform.

Turkish President Recep Tayyip Erdogan saw Amine Tiras, 6 years old, dressed in a Turkish Special Operations Forces uniform, weeping while delivering a speech in front of ruling party members, devoted to Turkish military operation in Afrin. He invited her to the stage, where he made a controversial promise, adding that maroon berets [part of the special ops uniform] don’t cry.

"She has the Turkish flag in her pocket. If she becomes a martyr, God willing, this flag will be draped on her," Erdogan said to the audience.

Erdogan tells a 6 years old weeping girl that she’d be wrapped with the flag she has in her pocket and honoured if martyred. Everything is ready! Everyone else except Erdogan’s family is expendable.. pic.twitter.com/T9UABSGIyo

Erdogan Tells a Weeping Girl, 6, She’d Receive Honors if Martyred https://t.co/KzeB9BjPbr Another heroic douchebag like Trump who loves the military but never served in it. Ready and eager to sacrifice other people's kids but not his own. #AmineTiras

Turkey has been conducting military operation called “Olive Branch” against Kurd forces on the territory of Afrin, Syria since January 20. The Turkish president claims the operation is not intended to threaten Syria’s sovereignty, but to eliminate the terrorist threat. Damascus has condemned the operation while Moscow has urged Turkey to respect the integrity of the Syrian state.

If Erdogan Keeps Alienating Neighbors and Allies, He ‘Cannot Survive’