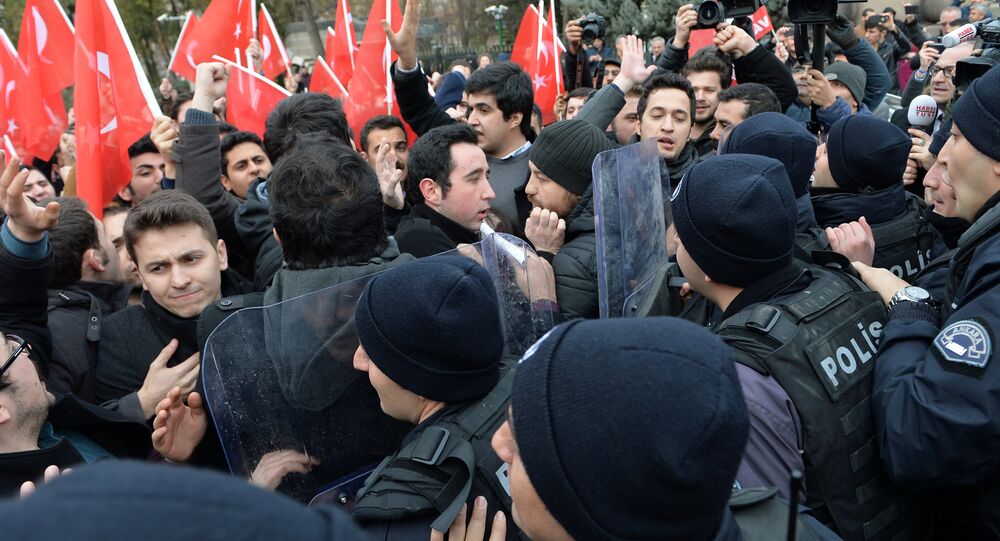 US State Secretary Tillerson arrived in Ankara on Thursday for talks with the Turkish side, which are believed to be difficult as the tensions between the two NATO allies have been running high recently over a number of issues, particularly Washington's support for the Syrian Kurdish YPG units.

The police tried to disperse protesters with tear gas during the anti-US demonstration held amid Tillerson's visit to Ankara, the organizers say.

According to the Sputnik Turkey, the police urged participants of the demonstration not to block the road and then cut them out from the building where the negotiations took place. The protest action is already over.

Photos on the social media show protesters, who gathered in front of the Ankara Palace hotel, where Tillerson was conducting talks with his Turkish counterpart Mevlut Cavusoglu.

Activists chanted anti-American slogans: "America kills our soldiers", "Damn the Kurdistan Workers' Party and its ally America", "Killer Tillerson, get out of Turkey."

Aykut Dis, head of the youth department of the Turkish opposition party Vatan, which organized the protest, told reporters that about 150 people took part in the demo. He noted that there were no permission to hold a rally recieved from the government.

Dis said that though the police used tear gas, "they themselves said that it was not their desire, but they were forced to do it."

According to the activist, the US is behind all the threats that Turkey faces in politics, economy and in the international arena. "We protest against this imperialist oppression," he added.

"We decided to arrange a "warm welcome" for Rex Tillerson. And the Turkish youth greeted him with their loud resentment. He received this message from us and will give it to Trump and the commanders in the Pentagon now. Your end has come! We cleanse West Asia from you. Get out from these lands, free humanity from your presence!" Dis said.

US State Secretary Tillerson arrived in Ankara on Thursday for talks with the Turkish side, which are believed to be difficult as the tensions between the two NATO allies have been running high recently over a number of issues, particularly Washington's support for the Kurdish YPG units, which are the major force in the Syrian Democratic Forces. In addition to this, Ankara and Washington have been at odds over the US decision to recognize Jerusalem as the capital of Israel, as well as the issue of Islamic preacher Gulen, who had been accused by Ankara of being behind the 2016 coup attempt.

READ MORE: 'Get out of Here, Tillerson!': Turkey "Glad-Hands" US Secretary of State

Ahead of Tillerson's visit, the Turkish Youth Union launched an online anti-Tillerson flashmob under the hashtag #TillersonDefol, literally translated into English as “Get out of Here, Tillerson. It went viral overnight and entered the list of Turkey’s top hashtags.