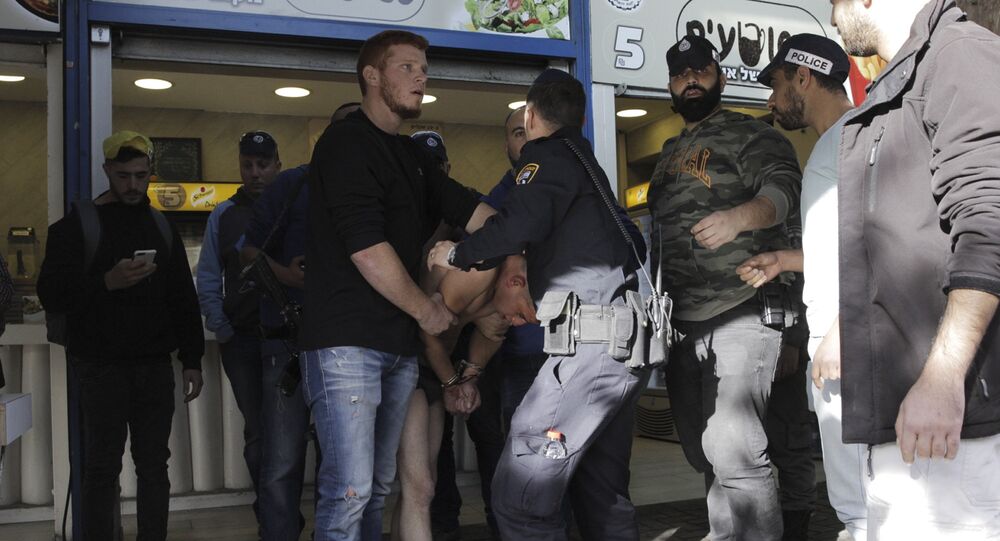 The day before, a Palestinian man attacked a guard of Jerusalem’s Central Bus Station with a knife amid the ongoing clashes after Trump's decision on Jerusalem.

RAMALLAH (Sputnik) — As many as 15 Palestinians, including terror suspects, were arrested during raids conducted by the Israeli Defense Forces (IDF) in the West Bank on Monday night, Avichai Adrai, the IDF spokesman, said in a statement.

Adrai indicated that Israeli troops had carried out raids in the district of al-Faraa, the resident of which perpetrated a stabbing attack in Jerusalem's city center the day before.

On December 10, a 24-year old Palestinian attacked a guard of Jerusalem’s Central Bus Station with a knife. The police have detained the attacker, dubbing the incident a terrorist attack. According to the ambulance service, the guard was taken to hospital with serious injuries to the upper part of his body. Following the attack, the Israeli police and security services have tightened security in transport in Jerusalem.

© REUTERS / Francois Lenoir
Mogherini to Netanyahu: Israel Should Not Expect EU States to Follow US Decision Jerusalem
The attack occurred after US President Donald Trump announced last week that the US recognized Jerusalem as the capital of Israel, sparking negative reactions from many countries around the world, primarily in the Middle East, as well as leading to mass protests and clashes between Palestinians and police in Bethlehem, the Gaza Strip and eastern Jerusalem, leaving over 1,000 injured during the so-called "day of rage."

Following the decision, Palestinian Islamic fundamentalist organization Hamas has called on Arab countries to halt all cooperation with the United States, while its former rival Fatah said that the two movements were "now united to stand against the occupation government and the decision of the US on Jerusalem."

Thousands of Moroccans Join Rally Against US Stunt on Jerusalem (VIDEO)