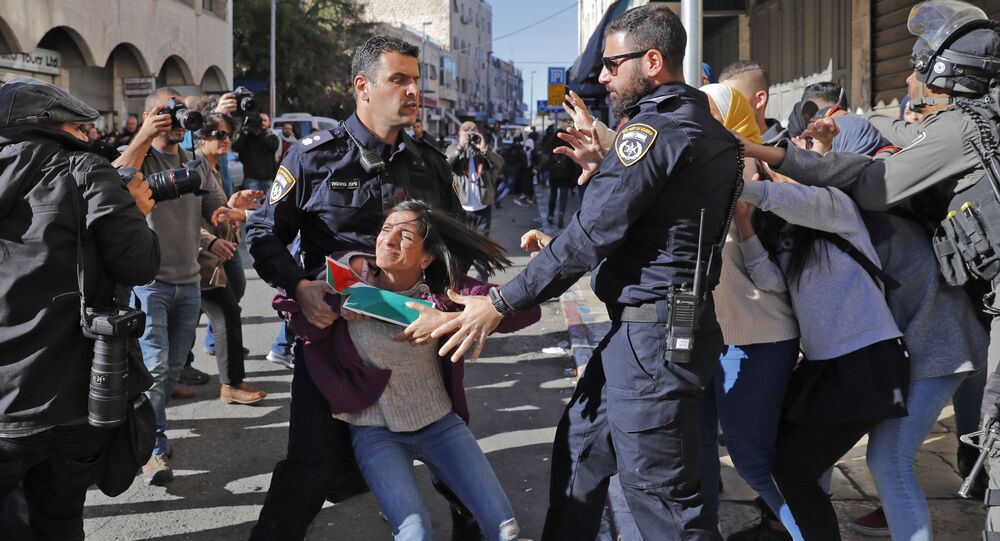 Gaza has seen massive protests over the past two days after US President Donald Trump publicly recognized Jerusalem as Israel’s capital, with Arab officials saying the latter can bring about no more than "violence and chaos."

Arab League foreign chiefs said earlier that Trump’s move had shattered hopes that the US could be a mediator in the lingering Israeli-Palestinian crisis, after its neutrality on the most sensitive issues for the region came to an end.

A new turn in the ongoing conflict ignited a range of large-scale protests both in the West Bank and Gaza on Friday and Saturday, causing thousands to take to the streets in solidarity all across the Arab world, as well as in Muslim-majority countries. Palestinians went as far as declaring a "three-day rage".

Anger seems to have peaked on social media, even causing volunteers to develop a special device application to remove violent posts:

Whatever the hype, people say on Twitter, as media outlets exhaust the topic the problem won’t cease to exist automatically: clashes will continue, some claiming their rights, some – protesting the wider world’s reaction.

Jerusalem may disappear from the headlines soon as media corporations exhaust their coverage of the Trump declaration, but Israel's everyday violence and colonization will continue as will Palestinian resistance and steadfastness.

Both Israel and Palestine claim their rights to call Jerusalem their capital – Israel has historically considered it to be the heart of the state, while Palestinians are striving to get back East Jerusalem, after Israel occupied it during the Six-Day War in 1967.

The Arab League voiced their condemnation over Trump’s words after hours of talks in Cairo, which resulted in a resolution rejecting the possibility of the US being a peace broker in the region. The officials agreed to file a note at the UN Security Council to also condemn the move, which, they said, "deepens tension, ignites anger and threatens to plunge the region into more violence and chaos."

For Trump, his words were in line with his campaign promises and he said it was "nothing more or less than recognition of reality."

But he has faced fierce criticism for the decision. At an emergency meeting of the UN Security Council on Friday, the US found itself isolated, with the other 14 members all condemning Trump's declaration. US ambassador Nikki Haley retaliated, citing the UN’s bias against Israel, saying the organization "has outrageously been one of the world's foremost centers of hostility towards Israel," while the US is still committed to negotiating the long-awaited ceasefire.

Following the session, on Saturday, Israel's Prime Minister Benjamin Netanyahu sadly remarked that amid the pervasive condemnation of Trump’s judgment, a missile fired towards Israel came in unnoticed by officials, causing no strong reaction.

He said he "had not heard any condemnation for the rocket firing against Israel that has come and the awful incitement against us".

Three rockets were fired towards Israel from Gaza on Friday, which caused Israel to retaliate with airstrikes. Israeli authorities said they had hit a number of Hamas military locations, killing two of its members.

READ MORE: US Decision on Jerusalem to Have 'Dangerous Political Consequences' — Fatah