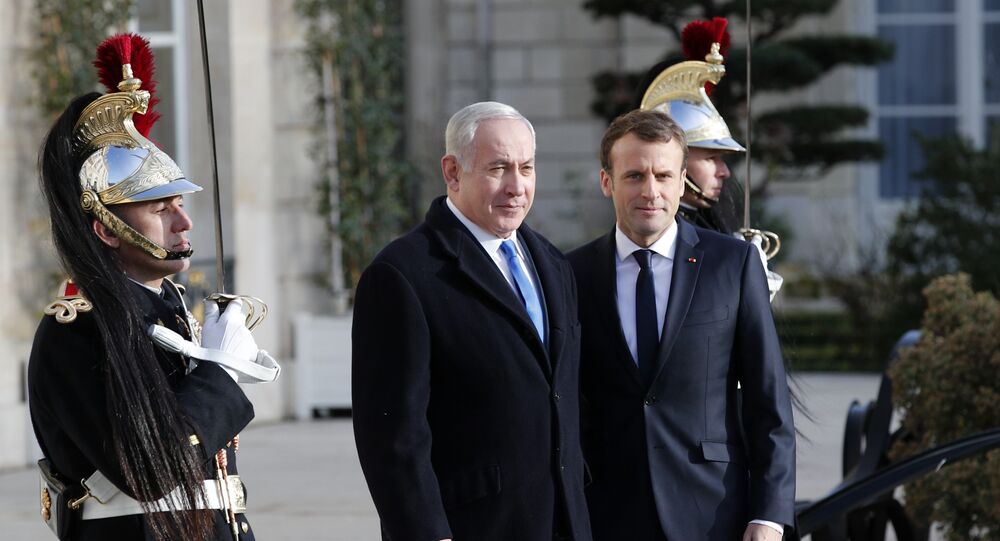 Netanyahu has met French President Emmanuel Macron in Paris in the wake of US President Donald Trump's controversial decision to recognize Jerusalem as the Israeli capital.

Israeli Prime Minister Benjamin Netanyahu has called on the Palestinians to agree that Jerusalem is the capital of the Jewish state.

"The sooner the Palestinians come to grips with this reality, the sooner we will move towards peace. This is why I think that [US] President [Donald] Trump’s announcement was so historic and so important for peace," Netanyahu said.

"I offer to Mr. Abbas to sit and negotiate peace, nothing could be easier," Netanyahu has stated at a press conference following talks in Paris with French President Emmanuel Macron.

In his turn, Macron has urged the Israeli prime minister to negotiate with the Palestinians in the wake of the controversial decision made by US President Donald Trump to recognize Jerusalem as Jewish state's capital.

"I am convinced that the only solution complying with the international law is the concept of two states," the French president said, adding, "I urged the prime minister to show courage in his dealings with the Palestinians to get us out of the current dead-end."

The French leader has condemned the protests against Netanyahu that had taken place in Paris on Saturday.

According to Macron, there is a will for a US mediation of the Israeli-Palestinian conflict, "we must wait and see what will be proposed."

At the same time, freezing settlement construction will be an important gesture for the sake of peace from Israel, Macron noted.

The Israeli settlement policy is among the key stumbling blocks for revival of the peace process between Israel and Palestine, which is seeking diplomatic recognition for its independence on the territories of the West Bank, including East Jerusalem, which are partially occupied by Israel, and the Gaza Strip. The Israeli government refuses to recognize Palestine as an independent political and diplomatic entity and continues to build settlements in the occupied areas, despite objections from the United Nations.

According to Saturday's report by Turkish NTV news channel citing sources, during Macron's phone conversation with Turkish President Recep Tayyip Erdogan, the two leaders have agreed to try to convince US President Donald Trump to change his decision on Jerusalem.