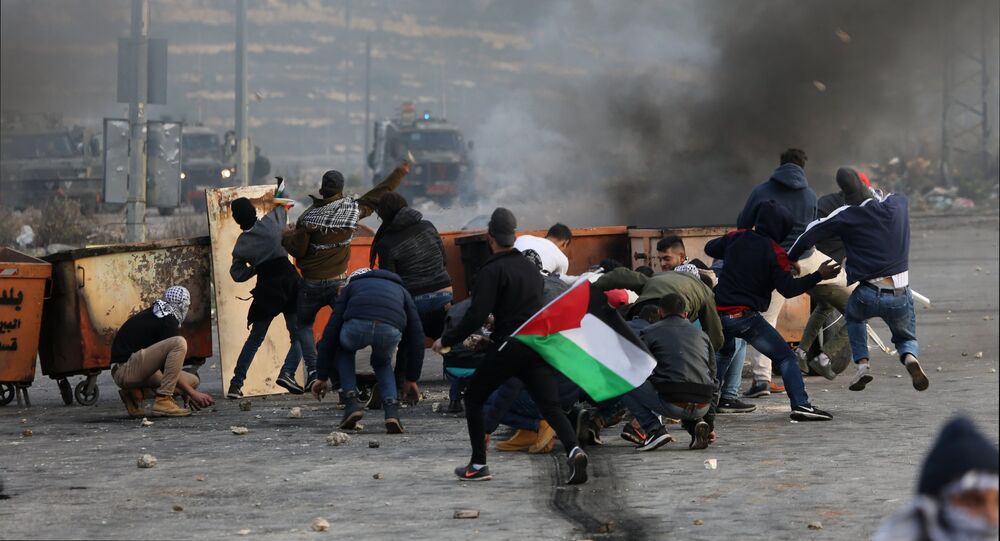 At least two Palestinian protesters were killed with over 760 others injured during Friday's Palestinian 'day of rage' against US President Donald Trump's decision to recognize Jerusalem as Israel's capital.

Of the two dead, a 30-year-old protester, Mahmoud al-Masri, was shot and killed by Israeli forces in the southern Gaza city of Khan Yunis. According to the Palestinian Red Cross, over 760 others were injured amid ongoing unrest across Gaza, the West Bank and the city of Jerusalem over Washington's decision to recognize the multi-ethnic and multi-confessional city as the capital of Israel.

"Another one, already the second Palestinian in the Gaza Strip has died, three others remain in critical condition," Gaza Health Ministry spokesman Ashraf Kidra said in a statement.

The heartbreaking moment the father of the first victim of the #Gaza conflict gives his farewell kiss to his son. Mahmoud Al-Masri #Palestine #HandsOffAlQuds #JerusalemThePalestinianCapital pic.twitter.com/F7djmyFT5z

Clashes broke out Friday following traditional Muslim prayers, quickly spreading to Bethlehem, Hebron, Nablus, Ramallah, Jenin, Jericho, Tulkarm, Qalqiliya, Jerusalem and other cities as protesters marched through the streets chanting slogans and held rallies condemning Israel and the US over the decision. Protest chants reportedly included "America is the head of the snake," "Jerusalem is ours," and "We don't need empty words, we need stones and Kalashnikovs."

Amateur video taken from the scene shows armed Israeli troops and police roughing up protesters, using teargas and detaining youth as the latter throw rocks, chairs and other objects from the street and start tire fires.

Palestinian Protestors are still at Damascus gate in #Jerusalem:: the Israeli occupation forces just again tried to remove them. pic.twitter.com/pOiUGN0SJT

Happening in Jerusalem now: this is Israel, using violence to control a Palestinian city it has no legal right to pic.twitter.com/mvNlgHxZuq

#LIVE #Gaza: Confrontations between Palestinian youths and Israeli occupation soldiers on the borders of the #Gaza… https://t.co/G25PHMIxsZ

By Friday evening, the Palestinian Red Crescent Society confirmed that several hundred protesters had received injuries, including dozens from rubber bullets and live rounds fired into crowds of protesters. Casualties have yet to be reported among Israeli security services.

The Israeli Defense Force confirmed the use of firearms by soldiers in Gaza, saying troops "fired selectively toward two main instigators and hits were confirmed."

The IDF also reported Friday that the Iron Dome missile defense system successfully intercepted a missile fired from the Gaza Strip into southern Israel. The attempted rocket attack was the third launched from the Hamas-controlled Gaza strip since Thursday. The IDF responded to the earlier attack by deploying a tank and an aircraft against two military posts in the Gaza Strip.

The Iron Dome aerial defense system intercepted a projectile that was fired from the Gaza Strip at southern Israel. No injuries reported

How many Israeli soldiers does it take to arrest a Palestinian kid? This is what US support for Israel is accomplishing. Photo taken today. #Jerusalem pic.twitter.com/NLWI62HQSR

Stones against bullets the unequal war in Palestine but still the world is silent on Palestinian plight.#QudsCapitalofPalestine pic.twitter.com/bD6ZtJVpAP

On Wednesday, Donald Trump officially recognized Jerusalem as Israel's capital, and ordered the State Department to begin preparations to move the US Embassy to the city from Tel Aviv. The move was praised by Israel, but condemned by other nations, including the US's European allies, for undermining the Israeli-Palestinian peace process. The decision also sparked protests by Muslims across the world. Palestinian Authority officials have told Sputnik that Palestine will not engage in talks until Washington cancels its decision, while the Hamas political and militant group has urged Palestinians to start an intifada uprising against Tel Aviv.

Due to competing claims on Jerusalem by Israeli and Palestinian authorities, the city's international legal and status has been hotly contested. Through its recognition of the city as the Israeli capital, the US will be the only country in the world to have an embassy there once the move from Tel Aviv begins in six months' time.