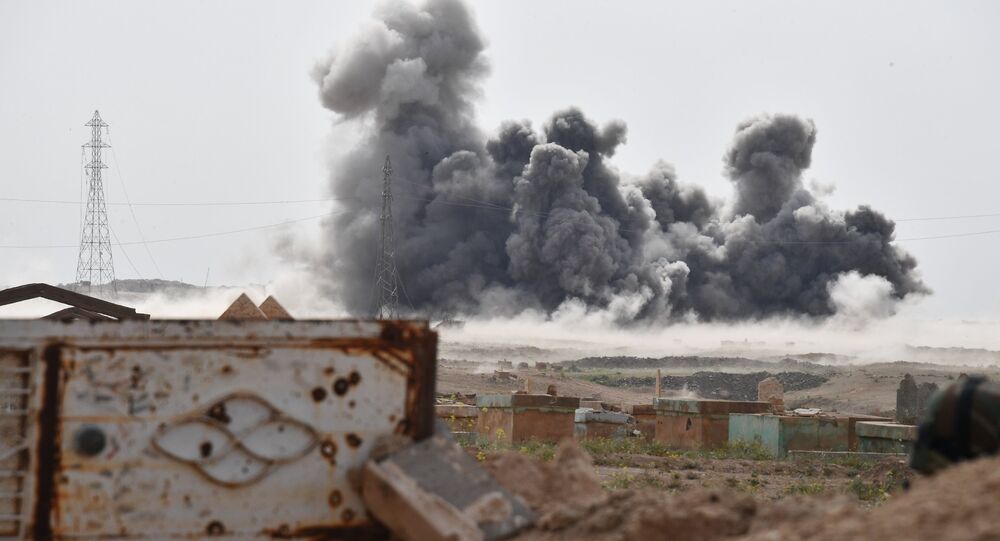 On Wednesday, Chief of the Russian General Staff Valery Gerasimov said that Syria was fully freed from Daesh and the remaining Islamist militants had been defeated in Deir ez-Zor. However, the US-led coalition believes that the terrorists have "yet to be cleared from that area."

WASHINGTON (Sputnik) — A representative of the Combined Joint Task Force — Operation Inherent Resolve's (CJTF-OIR) press service told Sputnik on Saturday that there still were some dispersed bands of gunmen in the Euphrates Valley.

"Our carefully considered military assessment is that Daesh is still present on both sides of the Euphrates River, and therefore Coalition surgical strikes continue on the East Bank of the Middle Euphrates River Valley in support of Syrian Democratic Forces (SDF). We know that Russian and Syrian Regime aircraft are continuing their strikes on the West Bank of the Euphrates River between the towns of Mayadin and Albu Kamal [Al Bukamal], so it is likely that [Daesh] has yet to be cleared from that area," the CJTF-OIR press service said on Saturday.

The US-led coalition  reaffirmed its commitment to the joint work with the Kurdish-led SDF.

"The Coalition continues to work with the SDF to ensure that previously liberated areas are cleared for the return of civilians. We are also working with the Syrian Democratic Council to create the space necessary to form a truly democratic and representative government in Syria through the UN-backed peace talks," the CJTF-OIR added.

The US Department of Defense disagrees with the Russian Defense Ministry's assessment of US aircraft actions in the Euphrates Valley as attempts to prevent the destruction of terrorists, representative of the Pentagon told Sputnik on Saturday.

"The US led coalition, not the Russian Federation or Syrian Regime, is the only force that has made meaningful progress against [Daesh]. Those claims are incorrect," the department representative said.

© AFP 2020 / SAUL LOEB
Russian MoD on Incident With US F-22 Over Syria's Mayadin: It Hindered Op, Simulated Aerial Fight
Earlier in the day, Russian Defense Ministry spokesman Maj. Gen. Igor Konashenkov said that most of the time the Russian and US aircraft flew too close to one another in the area of the Euphrates valley as a result of attempts by US forces to hamper the destruction of Daesh strongholds in the region.

The Russian Defense Ministry statement earlier on Saturday came in response to statements by Pentagon representatives to US media, in which the US Defense Department said that  Russian aircraft were deliberately flying too close to US aircraft in Syria.

The US-led coalition has been conducting airstrikes against Daesh in Syria and Iraq since 2014. The strikes in Syria are not authorized by the government of President Bashar al-Assad.

Russia has been carrying out strikes against terrorists in Syria at the official request of Damascus.

Russia Delivers Over 5 Tonnes of Aid to Syrian Provinces of Aleppo, Deir ez-Zor

Meantime, Russian servicemen delivered over five tonnes of humanitarian aid to residents of the Syrian provinces of Deir ez-Zor and Aleppo over the last 24 hours, the Russian Defense Ministry's Center for Syrian Reconciliation said.

"The Russian Center for Reconciliation held three humanitarian actions in the provinces of Aleppo and Deir ez-Zor. Citizens of Serbes, Khanasir and Khatlah received 5.1 tons of food and medical supplies," head of the reconciliation center Lt. Gen. Sergei Kuralenko said on Saturday.

© AP Photo /
US Assess Russia as a Guaranteor of Syrian Camp Humanitarian Aid Delivery
Residents of Serbes received 1.3 tonnes of aid, people from Khanasir – 1.9 tonnes, while civilians from Khatlah – 1.9 tonnes.

"The Russian Center for Reconciliation continues working at the sessions of National Reconciliation Committees. As a result, it was decided to carry out a humanitarian action in the Eastern Ghouta de-escalation zone (No. 3). Citizens of Bokkey and al-Tell, Damascus province will receive medical aid," Kuralenko said.

"As a result of cooperation of the Russian Center for Reconciliation and National Reconciliation Committee for the Idlib de-escalation zone (No.1) a ceasefire agreement has been signed with representatives of Burj Izzawi, Aleppo province," Kuralenko said.

© Sputnik / Mikhail Klimentyev
Assad Tells Putin at Meeting: Syria Was Saved as a State Thanks to Russia
He added that the reconciliation center together with the administration of the province of Deir ez-Zor had monitored the state of infrastructure in the settlements of Hussainiya, Marrat and Mazlum.

Russia is actively involved in solving the Syrian conflict by engaging in a military operation against terrorist organizations, serving as a mediator in the Astana reconciliation talks and guarantor of the Syrian ceasefire, providing civilians tons of humanitarian aid.

Syria has been engulfed in a civil war since 2011, as government troops fight a number of opposition groups, as well as terror organizations including Daesh.