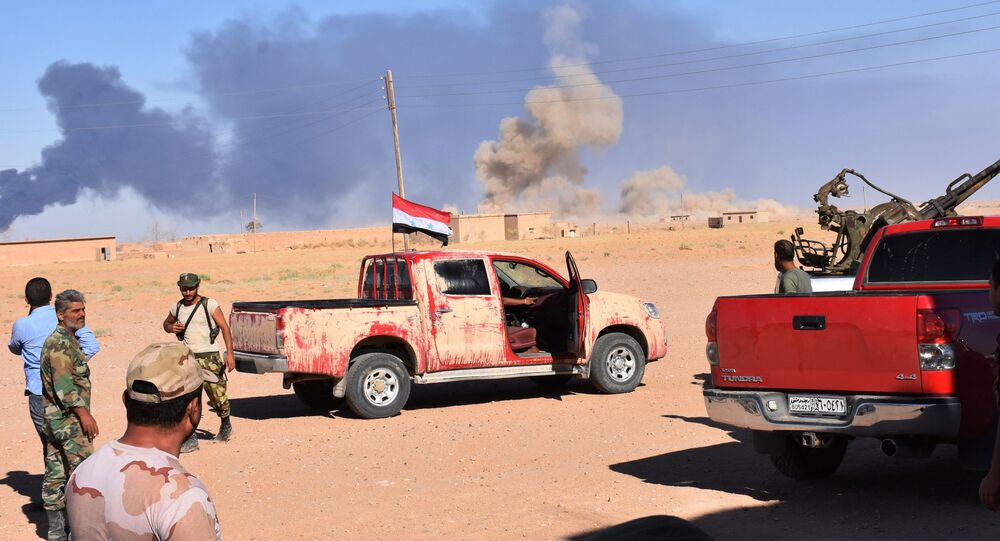 MOSCOW (Sputnik) —The US-led coalition fighting against Daesh terrorist group in Syria has accused Russia on Saturday of attacking the Syrian Democratic Forces (SDF) near the Syrian city of Deir ez-Zor.

Pentagon claimed that when Russia bombed a target near Deir ez-Zor it knew that the SDF units and coalition advisers were there.

"At approximately 12:30 a.m. GMT Sept. 16, Russian forces struck a target east of the Euphrates River in Syria near Dayr Az Zawr, causing injuries to Coalition partner forces. Russian munitions impacted a location known to the Russians to contain Syrian Democratic Forces and Coalition advisors. Several SDF fighters were wounded and received medical care as a result of the strike. Multinational Coalition troops advising and assisting the SDF were present but not wounded as a result of the Russian strike," the statement read.

Earlier in the day, a Kurdish source told Sputnik that at least six Syrian Democratic Forces (SDF) fighters were injured in a Syrian air force attack in eastern Syria.

© Sputnik / Dmitriy Vinogradov
Russia Fighting Terrorists in Syria Not to Secure a Foothold in Region - Envoy
The Russian Armed Forces have not provided any comments yet.

Member of the Russian upper house defense and security committee Alexey Pushkov said that Pentagon should remember its own airstrikes on the Syrian army and arms supplies to jihadists before accusing Russia of attacking the Kurdish-led Syrian Democratic Forces (SDF).

“Before accusing Russia [of attacking the SDF], the Pentagon should remember how [the United States] bombed positions of the Syrian army and supplied jihadists with arms worth of $2.5 billion,” Pushkov wrote on his Twitter page on Saturday.

Moscow has repeatedly claimed that decisions about the airstrikes in Syria are made only after thorough verification of the intelligence data. Since the start of the Russian aerial campaign the West has been accusing Moscow of targeting so-called moderate opposition factions in Syria and civilians. Russia and Syria have continuously refuted these allegations.

The SDF is an alliance of Arab and Kurdish militias backed by the US-led coalition. The SDF units began their own operation against the Islamic State terrorist group in the Syrian province of Deir ez-Zor, where the Syrian government forces are already conducting a successful operation with the support of the Russian combat planes. In November 2016, the SDF launched an Operation Euphrates Rage to retake Raqqa, located west of Deir ez-Zor, from Daesh with the support of the US-led international coalition.

Back to Normal: Images of Peaceful Life in Liberated Deir ez-Zor