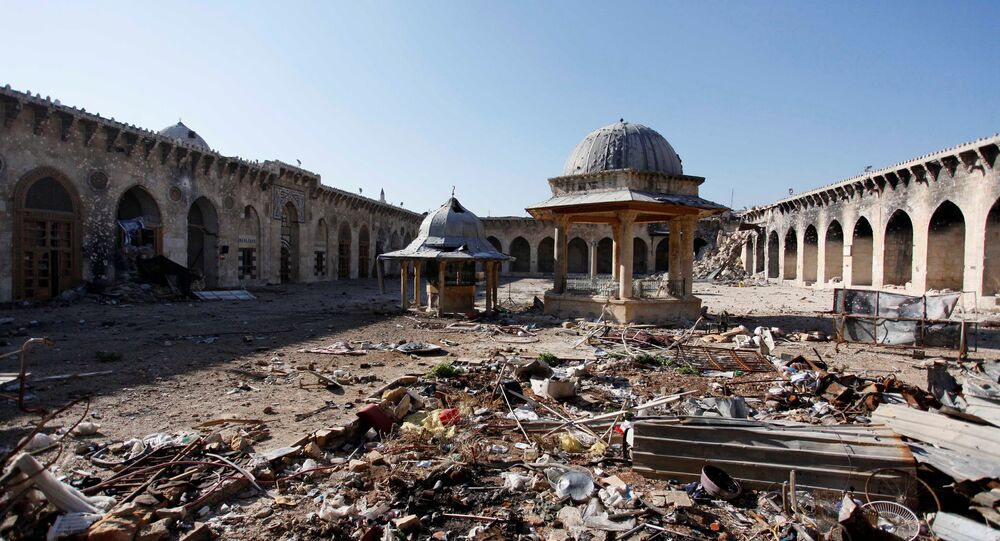 The Syrian army's operation in Aleppo made headlines last year as the US and EU officials blamed Damascus and Moscow for allegedly breaking humanitarian law and causing civilian casualties. However, the United Nations has drawn the attention of the international community to the US forces' failure to protect civilians in the city.

MOSCOW, (Sputnik) – The UN Commission of Inquiry accused in a newly released report on Syria the US forces of violating international humanitarian law when attacking alleged terrorists in Syria’s Aleppo in March.

“The report also found that US forces failed to take all feasible precautions to protect civilians and civilian objects when attacking alleged terrorists and destroying part of a mosque complex in al-Jinah, Aleppo in March, in violation of international humanitarian law,” the United Nations said in a statement on UN Commission of Inquiry on Syria’s report.

The Human Rights Watch said in an earlier report that US and other coalition forces aerial attacks in Aleppo resulted in possibly significant civilian casualties. On March 16, US forces struck a mosque near al-Jinah in Syria's Aleppo province, killing dozens. US authorities said the attack targeted and killed members of al-Qaeda, but residents have told HRW the attack killed civilians almost exclusively.

However, mainstream media reports were focused mostly on allegations that the Syrian government forces' operation in Aleppo, Syria's second largest city, had caused casualties. Despite presenting no evidence, US and EU officials accused Moscow and Damascus of allegedly violating international law during the campaign to free Aleppo from al-Nusra Front jihadists and their rebel allies who had controlled the western part of the city since August 2012 until December 2016.

The city was finally liberated in a Syrian army operation which had lasted almost a year in the end of 2016 after the last militants left its eastern part, thus the Syrian army gained full control over Aleppo. During the campaign, Russia had repeatedly contributed to establishment of humanitarian pauses in the city, all of which were undermined due to the UN humanitarian bodies’ inability to deliver aid and because of the militants’ attacks on civilians and the army.

© Sputnik / Iliya Pitalev
Top-Five Events on the Battleground in Syria That Changed the Prospects of the War in 2016
Moreover, Russia sent field hospitals, surgeons and medical equipment to Aleppo to help the residents, one of which was presumably shelled by Syrian rebels, causing casualties among Russian medics.

After the liberation of Aleppo, numerous reports of atrocities committed by militants in the eastern part of the city have been confirmed. The Syrian army found bodies of kids tortured to death by terrorists, while food suplies delivered by the Western countries in eastern Aleppo was consumed only by militants, while civilians starved.