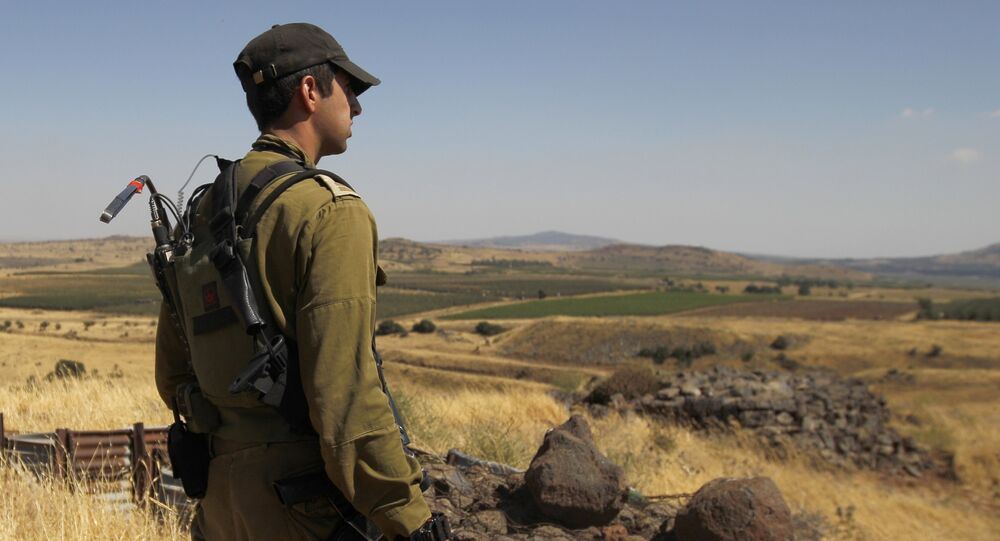 In an interview with Sputnik, Russian expert Vladimir Sazhin commented on Israel's strong opposition to Iranian troops behind deployed to a de-escalation zone in southern Syria.

© Sputnik / Natalia Seliverstova
Read Carefully: Russian Foreign Ministry Publishes Syria De-Escalation Zones Memo in English
During the G20 summit in Hamburg last week, Russian President Vladimir Putin and his US counterpart Donald Trump agreed, among other things, on a ceasefire in the de-escalation zone in southwestern Syria. The agreement pertained to Daraa Governorate and Quneitra Governorate, located along the Israeli-Syrian border near the Golan Heights.

Although the agreement entered into force on July 9, Tel Aviv is still up in arms about the deployment of Iranian servicemen to the Israeli border, something that was recently confirmed by Israeli Defense Minister Avigdor Lieberman.

Speaking to Sputnik, Russian expert Vladimir Sazhin gave his thoughts on whether Israel would be able to undermine the establishment of this de-escalation zone in Syria, defying the Russian-American agreements.

"Israel could not but react to it. Tel Aviv does not even accept the possibility of Iranian servicemen and Hezbollah being deployed to Israeli border near the Golan Heights. The Israeli leadership insists on withdrawing most of the Iranian troops, Iran-controlled Iraqi militias and Hezbollah detachments from Syria," Sazhin said.

Hezbollah is a Shia Islamist militant group based mostly in Lebanon which has historically opposed the state of Israel and its incursions into Lebanese and Syrian territory; it is considered a terrorist organization by Israel and enjoys the financial backing of similarly Shia Muslim Iran.

Sazhin recalled that in response to shelling from Syrian territory, Israel has repeatedly launched air strikes at pro-Iranian groups in the Golan Heights and Syria.

Between June 24 and July 2, Israel staged at least five air strikes on the Syrian side of the Golan Heights.

During the meeting, Netanyahu urged Putin to support the idea of a 'security zone' around the Golan Heights, in which the Iranian or pro-Iranian military presence would be banned.

"No doubt, the establishment of the southern de-escalation zone affects the interests of many players involved in the Syrian issue. These interests are sometimes directly opposite," Sazhin said.

He recalled that this zone is designed to ensure security near the complex Syrian-Israeli border and prevent confrontations between the Israeli Defense Forces and Iranian, pro-Iranian  or Hezbollah armed groups. "This clearly reduces the risk of another hot spot emerging in addition to countless hot spots already in place on Syrian territory and the entire Middle East," Sazhin pointed out.

He said that UN Special Envoy for Syria Staffan de Mistura "rightly considers the establishment of a ceasefire in the south-west of Syria a significant step in the settlement of the conflict."

"This is certainly so. However, the actions of Russia, which cooperates on this with the United States, Jordan and even Israel, may alarm Iran and affect interaction between Moscow and Tehran on Syria in the future. Therefore, Moscow will have to conduct explanatory work among all those who oppose the southern de-escalation zone in Syria," Sazhin concluded.

© Sputnik / Mikhail Voskresenskiy
Hezbollah of Discord: Syria and Israel Squabble Over Assad's Ally
Last Sunday, US National Security Adviser Herbert R. McMaster said that the United States is encouraged by the creation of a de-escalation zone in south-western part of Syria, which is the result of negotiations with Russia and Jordan, and hopes that this will help to end the conflict in the country.

The aide also said that President Donald Trump, after concluding an agreement with Russia and Jordan, discussed the agreement with the leaders at the G20 summit in Hamburg, including the leaders of Turkey, the United Kingdom and Germany.

Earlier, Russian Foreign Minister Sergey Lavrov said that the United States, Russia and Jordan had agreed on a ceasefire in southwestern Syria starting at noon on July 9. The United States and Russia have committed themselves to ensuring the implementation of the ceasefire.