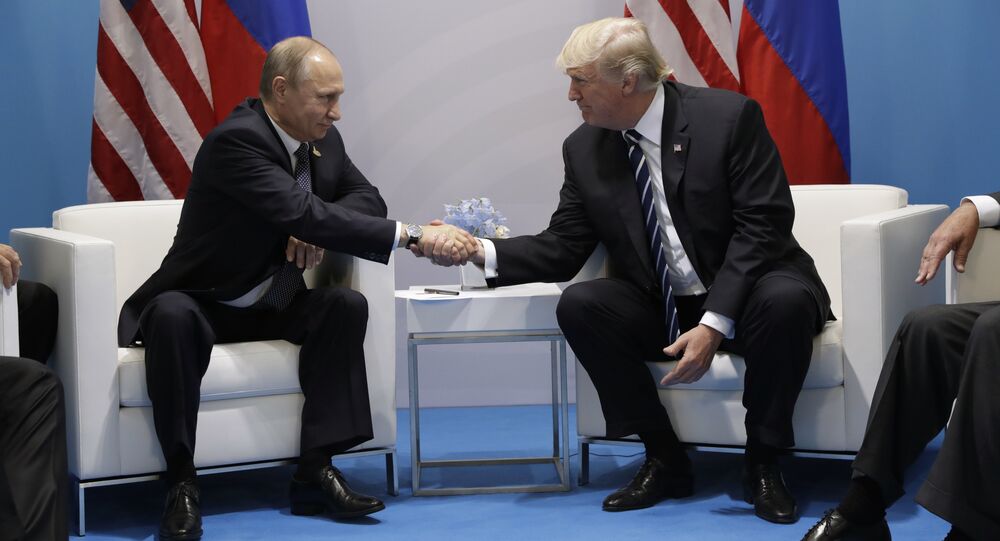 © Sputnik / Michael Klimentyev
The Meeting the World Waited For: What did Putin and Trump Manage to Agree Upon?
On July 7, Russian President Vladimir Putin and his US counterpart Donald Trump held their first personal meeting on the sidelines of the G20 summit in Hamburg. Negotiations lasted almost 2 hours and 20 minutes.

Speaking at a press conference after the talks, Russian Foreign Minister Sergey Lavrov said that the two leaders had managed to arrive at a consensus on a number of pressing issues, including Syria, Ukraine and cybersecurity.

In an interview with Sputnik, prominent Italian political scientist Germano Dottori said that it is clear that "Trump really wants to cooperate with Putin, but he will have to do it with great care."

The fact is that when the current resident of the White House prepares certain agreements, he is forced to resort to almost acrobatic somersaults, something that was in case in the run-up to the Putin-Trump meeting.

"First, Trump made a number of scathing statements regarding Russia. While on a visit to Poland, and then during the G20 summit, he actually opened the way for agreements, in particular, on the Syrian problem," Dottori said.

He drew attention to the statement of Russian Foreign Minister Sergey Lavrov, who noted that both presidents are primarily driven by the national interests of their countries and see these interests as something that helps them clinch mutually beneficial agreements.

"This was clearly manifested, in particular, in the new agreements on Syria. Obviously, the parties have different interests, but they intend to cooperate and negotiate. Strictly speaking, this is exactly what we expected from Trump," Dottori pointed out.

In this regard, Dottori recalled that upon entering office, Trump immediately declared that as far as the US foreign policy is concerned, Washington will be guided by US national interests, and that all countries of the world have the right to act in the same way.

"The interests can and should be negotiated, and this, in fact, is a new tendency introduced by Trump," Dottori said.

He stressed that he believes in the possibility of reaching serious agreements between the Presidents of Russia and the United States.

According to him, "Trump wants to speak to the point because he is a very practical man, and Putin is also determined to find concrete solutions that should be adopted in the current situation."

"So we are speaking of two leaders who adhere to pragmatism and really believe in national interests, which means that they will by all means reach a consensus. That's why I think that an agreement between Russia and the US will be achieved, otherwise Trump might face a situation when China, Germany and Russia will unite and this will not meet US interests," Dottori said.

He warned that clinching more agreements between Russia and the US will be a rather tricky task.

"I continue to be an optimist, but it is obvious that the US political system forces Trump to resort to complex combinations in order to achieve his goals. In fact, before undertaking any meaningful initiative he must do something that seems to be going in the opposite direction. This tendency will continue in the future," Dottori concluded.

© Sputnik / Mikhail Klimentyev
Mission Failed: US First Lady Unable to Cut Short the Putin-Trump Meeting at G20
Meanwhile, Mexican political analyst Ana Gutierrez del Sid told Sputnik that she believes that the main result of the meeting between the Presidents of Russia and the United States, is the failure of attempts to prevent such gatherings.

"[The Putin-Trump meeting] clearly reflected  the failure of those political forces who wanted to prevent or cloud this meeting; among them are those who accuse Russia of interfering in the US elections, but who could never prove anything," Gutierrez del Sid said.

According to her, the possible ceasefire in Syria, announced after the meeting, is a very important step to achieving peace in the country.

"During the seven years of the war, various efforts were made to end the hostilities, but none of them have yielded results to date. The differences between Washington and Moscow on this are still in place, but international terrorism and the fight against the terrorist group Daesh are important points for the two countries' cooperation [on Syria]," Gutierrez del Sid emphasized.