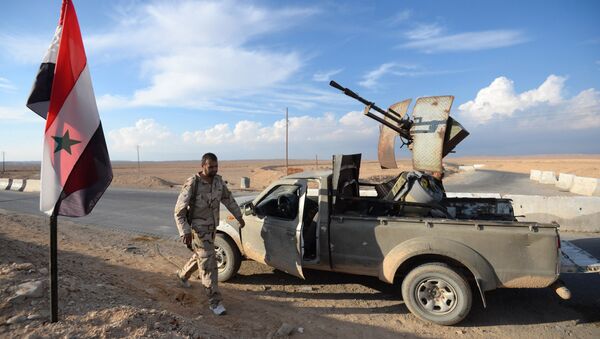 © Sputnik / Mikhail Voskresenskiy
/
Go to the photo bank
Subscribe
High-ranking officials in Israel and Syria have engaged in tough rhetoric following an Israeli airstrike on Hezbollah. The Lebanon-based Shia movement is one of Damascus' key allies in its war against Daesh and other terrorist groups, but Tel Aviv views it as one of the top threats to its security.

The Shia movement "is a reliable ally of the Syrian Arab Army in its anti-Daesh efforts. For instance, Hezbollah fighters took part in the operation aimed at recovering Russian pilot Konstantin Murakhtin, whose plane was shot down by the Turkish Air Force in 2015. They were also actively involved in both Palmyra campaigns and took part in liberating Aleppo," Andrei Veselov wrote for RIA Novosti.

Assad on Israeli Threats: Defending Borders is 'Our Right, Duty'
The analyst added that Damascus "badly needs" Hezbollah, saying that many observers have mentioned that its fighters have been some of the most efficient and disciplined during anti-Daesh operations in Syria.

For its part, Israel views Hezbollah as a terrorist organization and has occasionally carried out anti-Hezbollah missions in Syria, saying that they are aimed at preventing Iran from delivering advanced weapons systems to the group.

"Israel has previously violated Syrian airspace," Veselov said. "These missions were primarily aimed at infrastructure facilities, leaders and fighters of Iran-backed Hezbollah, which is active in Syria. In December 2015, one of Hezbollah's military commanders Samir Kantar was killed in Damascus in a missile strike launched by the Israeli Air Force. In May 2016, Israel eliminated another commander, Mustafa Badreddine."

The latest incident took place on Friday when the Israeli Air Force launched airstrikes on several targets near the Syrian city of Palmyra, prompting Damascus to fire three anti-aircraft missiles at Israeli warplanes. One of them was intercepted by the Arrow missile-defense system.

Israeli Threats to Destroy Syria’s Air Defense Aimed at 'Advancing Own Interest'
According to unconfirmed reports, one Israeli plane was brought down and another damaged, something Tel Aviv denied had happened.

This has been the most serious incident between Tel Aviv and Damascus since the 2011 foreign-sponsored uprising in Syria morphed into a large-scale conflict.

On Sunday, Israeli Defense Minister Avigdor Liberman pledged that a tough response would follow should a similar situation occur in the future. "The next time the Syrians use their air defense systems against our airplanes, we will destroy all of them without thinking twice," he said.

The same day, both the Syrian Defense Ministry and Hezbollah announced that they shot down an unmanned aerial vehicle (UAV) in the province of Quneitra located in southern Syria on the border with Lebanon, Jordan and Israel. The Shia movement identified the drone as the Skylark, a device used for tactical surveillance and reconnaissance.

Israeli Airstrikes on Syria 'Seek to Prevent Iran's Influence in Region'
Earlier this week, Israeli Prime Minister Benjamin Netanyahu reiterated that the country will not abandon its policies in Syria, saying that Israel will "not tolerate the transfer of advanced weaponry" to Hezbollah. "It's our policy to strike at the convoys of sophisticated weaponry," he noted. "We will continue to attack whenever the Iranians smuggle advanced arms."

Netanyahu further said that he made Israel's stance clear to Russian President Vladimir Putin during their meeting on March 9. "Therefore we need this personal connection [with Putin], which is important for Israel's national security," Netanyahu added.

000000
Popular comments
Judged by frantic Israeli reaction to this latest conflict, I am 1000% sure that one or more Israeli planes were shot down and dropped in Israeli territory. Never in the last decade have I seen Israelis so scared as displayed by their reaction to the latest confrontation. It is bound to get worse as the Syrians and Iranians beef up air defenses in Syria. It is about time. Thank Russia for supporting the Syrian government and upholding justice for humanity.
alex_glazunov
22 March 2017, 20:31 GMT1
000000
They can't get over having their pathetic Kike arse's handed to them by Hezbollah back in in 2006.
beydety
22 March 2017, 13:03 GMT
000000
Newsfeed
0
New firstOld first
loader
LIVE
Заголовок открываемого материала
Access to the chat has been blocked for violating the rules . You will be able to participate again through:∞. If you do not agree with the blocking, please use the feedback form
The discussion is closed. You can participate in the discussion within 24 hours after the publication of the article.
To participate in the discussion
log in or register
loader
Chats
Заголовок открываемого материала
Worldwide
InternationalEnglishEnglishMundoEspañolSpanish
Europe
DeutschlandDeutschGermanFranceFrançaisFrenchΕλλάδαΕλληνικάGreekItaliaItalianoItalianČeská republikaČeštinaCzechPolskaPolskiPolishСрбиjаСрпскиSerbianLatvijaLatviešuLatvianLietuvaLietuviųLithuanianMoldovaMoldoveneascăMoldavianБеларусьБеларускiBelarusian
Transcaucasia
ԱրմենիաՀայերենArmenianАҧсныАҧсышәалаAbkhazХуссар ИрыстонИронауОssetianსაქართველოქართულიGeorgianAzərbaycanАzərbaycancaAzerbaijani
Middle East
Sputnik عربيArabicArabicTürkiyeTürkçeTurkishSputnik ایرانPersianPersianSputnik افغانستانDariDari
Central Asia
ҚазақстанҚазақ тіліKazakhКыргызстанКыргызчаKyrgyzOʻzbekistonЎзбекчаUzbekТоҷикистонТоҷикӣTajik
East & Southeast Asia
Việt NamTiếng ViệtVietnamese日本日本語Japanese俄罗斯卫星通讯社中文（简体）Chinese (simplified)俄罗斯卫星通讯社中文（繁体）Chinese (traditional)
South America
BrasilPortuguêsPortuguese
NewsfeedBreaking
11:14 GMTPunjabi Activists Clash With Police in Delhi During Anti-Farm Law Protests - Video
11:07 GMTClip of Man With Crossbow on Balcony in Netherlands Emerges Online Amid Reports of Stabbing Attack
10:48 GMTTwo Killed, One Injured in 'Crossbow Attack' in the Netherlands
10:44 GMTAUKUS Raises Many Questions From Point of View of Nuclear Proliferation, Russia's IAEA Rep Says
10:44 GMTUK-US Post-Brexit Trade Deal Unlikely If Northern Ireland Peace Accords Destroyed, Pelosi Says
10:41 GMTAUKUS Will Make Indo-Pacific Fiercely Contested, Sinologist Says
10:40 GMTOxbridge Fails to Top Times' List of Best UK Universities for First Time
10:39 GMTLa Francophonie Suspends Guinea From Organisation Over Military Coup
10:24 GMTRussian Online Voting System Suffers DDoS-Attack Coming From US, German, Ukrainian IPs
10:21 GMTPutin: US and NATO Countries Should Provide Most of Money for Post-War Afghan Reconstruction
09:58 GMTPutin to Vote Online in Elections to Russian Parliament
09:51 GMTTwo Charged With New IRA Murder of Blogger Lyra McKee In Northern Ireland In 2019
09:13 GMTPrince Andrew Dealt Blow After US Judge Rules That Sex Abuse Lawsuit Isn't 'Game of Hide and Seek'
08:31 GMTCosmic Rerun? 10 Billion-Year-Old Supernova Will Soon Appear Again - Scientists Reveal Why
08:20 GMTAs Sweden Tries Nouri Over Iran 'Prison Massacre', Analyst Calls Case Groundless
07:48 GMTSCO Summit: Putin Calls for Common Line on Afghanistan in Wake of US 'Flight'
07:22 GMTPsaki Says Biden's Constant Coughing Not 'an Issue of Concern'
07:11 GMTIndia Eyes Record Vaccination on PM Modi's Birthday, But Opposition Observes It as Unemployment Day
07:06 GMTIndia Doesn't Subscribe to 'Clash of Civilisations' Theory, Jaishankar Clarifies to China's Wang Yi
06:59 GMTUN Chief: 'Absolutely Essential' to Create Mechanisms to Inject Cash Into Afghan Economy