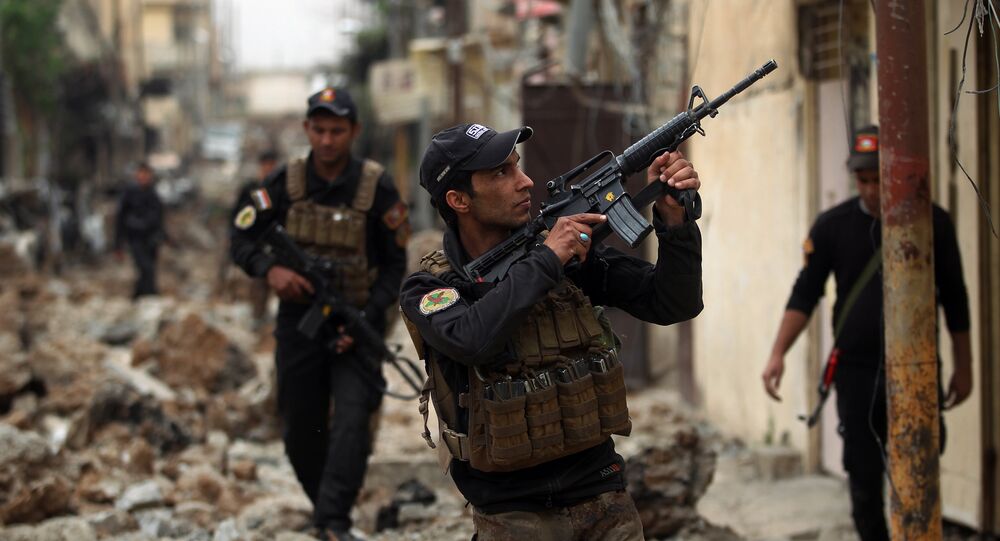 Iraqi servicemen killed at least 79 militants of the Daesh terror group as part of the operation aimed at liberation of the western part of Mosul during the past 24 hours, Lt. Gen. Raid Shakir Jaudat of the Iraqi Federal Police said Sunday.

BAGHDAD (Sputnik) – Jaudat also told reporters that the Iraqi military, assisted by civilians, managed to detain dozens of terrorists, who tried to flee pretending to be refugees.

The terror group in Mosul was "completely defeated,"Jaudat stressed, adding that the Iraqi forces would take control over the rest of the city in the coming hours.

On Saturday, the Iraqi federal police freed two areas along with a bridge in the western part of the city of Mosul from Daesh, the operation’s command said and Jaudat specified that the Iraqi forces took the control over the area near the building housing Nineveh Governorate’s administration.

On June 22, Iraqi Prime Minister Haider Abadi said Mosul was likely to be cleared of terrorists within days.

Mosul has served as the Daesh headquarters in Iraq since the group's invasion from Syria in 2014. On February 18, Abadi announced the start of operations to liberate the western half of the city. Iraqi and the US-led coalition forces freed its eastern part in late January 2017, with fighting now ongoing to complete the mission.