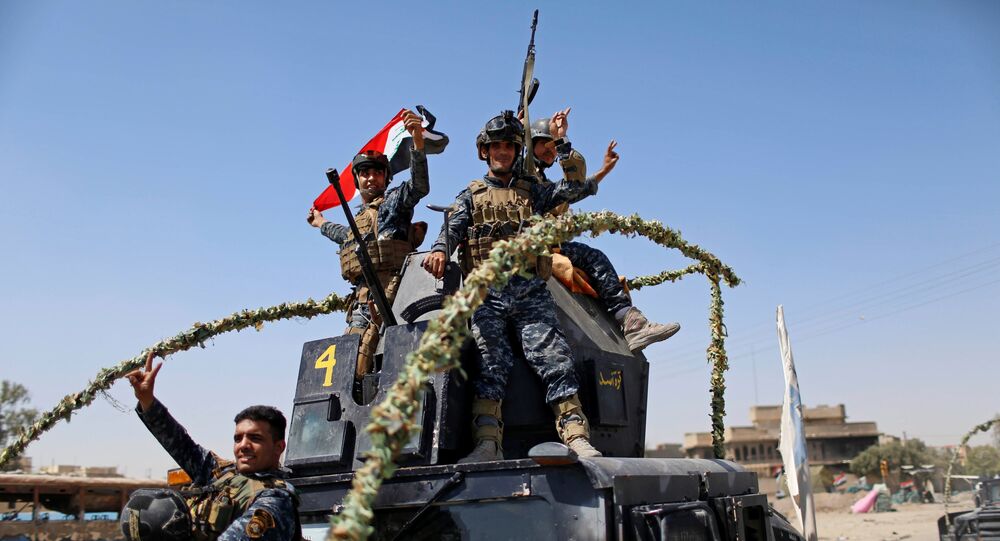 Terrorist Whack-a-Mole: Daesh's Ouster From Iraq May See It Popping Up Elsewhere

Media reports out of Mosul, Iraq are saying that the city is close to being fully liberated from Daesh (ISIS). Asked for comment, senior international affairs expert Ely Karmon said that while the victory has important symbolic, psychological and strategic implications, the danger is that the terrorists may evacuate to sanctuaries across the globe.

Iraqi government troops have captured the Grand al-Nuri Mosque where Daesh proclaimed its self-declared caliphate in 2014. Following the liberation, Iraqi state television broadcast a message announcing the "fall of the mythical state," referring to Daesh.

© REUTERS / Erik De Castro
Heavy Fighting Continues in Mosul’s Old City After Mosque Area Liberation
Conflicting reports continue to circulate regarding the city's present status. While media had earlier said the terrorists had been knocked out of all districts in the city, Operation Inherent Resolve spokesman Ryan Dillon later told reporters that fighting continues in the area of the Old City.

In any event, fighting for Daesh's main stronghold in Iraq appears to be approaching its end. Speaking to Radio Sputnik, Dr. Ely Karmon, a senior research scholar at the International Institute for Counter-Terrorism in Herzliya, Israel, offered his appraisal on the terrorist group's future, both in the Middle East and worldwide.

Karmon noted that the news of Mosul's imminent liberation has "very important symbolic, psychological and strategic" implications as far as the destruction of the Islamic State caliphate was concerned. "This was perhaps the only big territorial entity under a terrorist leadership, and now their capital, or main city has been liberated," the expert said.

"This does not mean that ISIS, or the jihadi threat has disappeared," the analyst stressed, but the 'state' entity is moving closer and closer to being wiped out, and that is undoubtedly a very important development.

© REUTERS / Erik De Castro
Smoke billows from the ruined Grand al-Nuri Mosque after it was retaken by the Iraqi forces at the Old City in Mosul, Iraq June 29, 2017

According to the analyst, Daesh had prepared itself for the inevitable defeat in Mosul a long time ago.

© REUTERS / Stringer
Daesh Death Throes: Experts Predict Moment Caliphate Will Be Totally Annihilated
"The leadership, even at the middle level, likely left the city; many of them were killed during the [previous] battles." Karmon recalled that earlier this year, Iraqi intelligence had warned that Daesh "would retreat into the desert, [heading to] Sunni cities which had already been liberated by the Iraqi army, like Ramadi and Fallujah, and organize clandestine networks."

This, the analyst noted, may result in a repeat of what happened in 2003 and 2006-2007, when former Ba'athist loyalists who would ultimately end up joining Daesh organized insurgencies. "They have family and territorial connections in the Sunni regions, and will perhaps lead a new insurgency."

© AFP 2021 / AHMAD AL-RUBAYE
Members of the Iraqi Counter-Terrorism Service (CTS) advance towards the Grand Mosque of Nuri in the Old City of Mosul on June 29, 2017, during the ongoing offensive by Iraqi forces to retake the last district still held by the Islamic State (IS) group

In Syria's case, Karmon stressed that the situation there was "much more complex. Even with the [anticipated] fall of Raqqa, there is a jihadist stronghold in Idlib province in the western part of Syria, and in the south there are moderate and Islamist elements near the Jordanian and Israeli border who are still fighting the regime of Bashar Assad."

The analyst warned that the Al-Nusra Front (the al-Qaeda offshoot in Syria) may very well take advantage of Daesh's imminent collapse, and "could recruit many of the members of ISIS which are fleeing from Mosul, Raqqa and other cities, and become a stronger element in the Syrian arena. My colleagues and I evaluate Nusra as the most important and strongest [terrorist] element in Syria after the disappearance of Daesh as a territory."

© REUTERS / Muhammad Hamed
Daesh Gives Its Recruits 'Passports to Heaven' to Boost Morale (PHOTO)
As for Daesh's remaining presence in Iraq and Syria were concerned, Karmon said that local fighters aside, "the foreigners will look for refuge; the major refuge will be Yemen and Libya, two very unstable and ungovernable territories, and even Central Asia, especially Afghanistan, where we see a revival of the Taliban, which already controls some 20% of the territory, and from there to Pakistan…From there they can threaten Central Asia, Southeast Asia, and also Russia."

Retreating or not, Karmon noted that it was also important to keep in mind that Daesh remains in active competition with Al-Qaeda.

"People forget that Al-Qaeda is alive and kicking; they are not so strong territorially like ISIS, but they have a big presence in Afghanistan and Pakistan, in coalition with the Taliban; they are present in northern Africa, including in Libya; they are present in Somalia via al-Shabab, and in the Arabian Peninsula in Yemen."

© AFP 2021 / ABDULLAH DOMA
Libyan men hold Al-Qaeda flags while sitting next to an anti-aircraft artillery weapon (File)
© Sputnik / Mikhail Voskresenskiy
'Punishing Sword': Why Terrorists Target Saudi Arabia
"So ISIS will try to take some control [outside Syria and Iraq], but they will be in competition with al-Qaeda, and perhaps many jihadists will turn to al-Qaeda, because originally al-Qaeda was the ladder organization if you like," the analyst said.

In any case, Karmon noted that while "there are networks and allegiances which exist [among the terrorists], as we have seen in the past, they can change quite rapidly. It will be seen how the defeat of Al-Bagdadi will be [seen] by his associates, because ISIS is not only Iraq and Syria; it's also the Sinai province, the Libyan presence, and so on."

Ultimately, the analyst emphasized that "from the point of view of the terrorist threat, it's clear that it will not disappear. We saw what happened in Europe, we saw attacks in Africa by small cells or individuals. The big question is: is there a network which is already on the ground and prepared to act on a larger scale, especially in Europe, in Russia, and in Southeast Asia, in India for instance? We don't know yet, and this will have to be monitored in the future with the disappearance of the main force," in Iraq and in Syria.