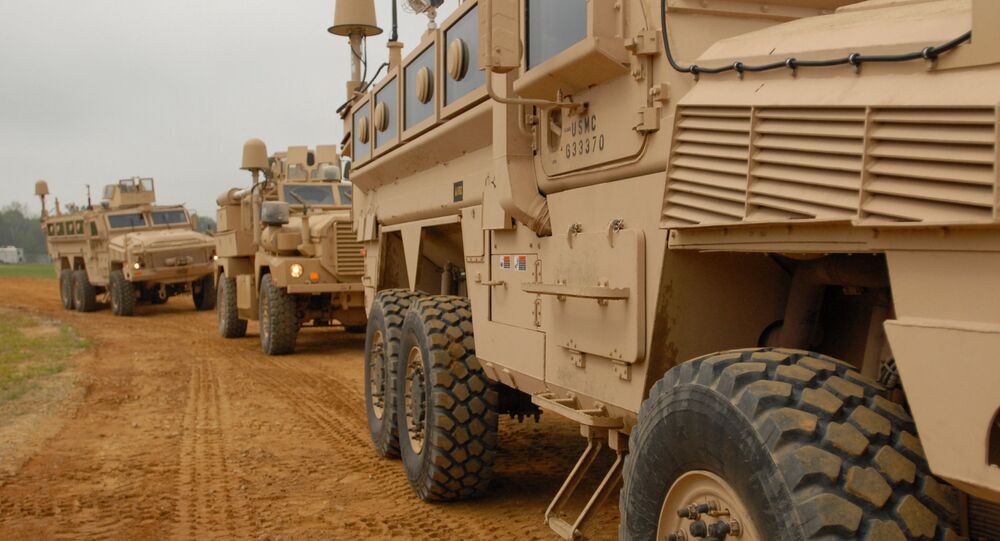 US Marines deployed to Syria in March are assisting the counterterror campaign in the country with logistics, Central Command head Gen. Joseph Votel said in a testimony at the US House Armed Services Committee on Wednesday.

WASHINGTON (Sputnik) — On March 9, the US-led coalition confirmed that a US Marine Corps artillery unit had deployed to Syria. Four hundred troops were expected to arrive. Hitherto, the US military contingent in Syria has been comprised of about 500 people.

"They [marines] are also helping us with some of our logistics capability in Syria," Votel stated. "Syria is a fairly immature area for us in terms of that. We don’t have big infrastructure."

© Sputnik / Valeriy Melnikov
US Marine Corps Unit Arrives in Northern Syria
Votel noted that CENTCOM has recognized that to pursue US military objectives in Syria it would need to provide more direct fire support capability for its Syrian Democratic Force partners on the ground.

"That is what you are seeing. They [the marines] have deployed, they are helping us with that particular aspect."

The United States deployed US marines to the Syrian city of Raqqa without the permission of Damascus, Votel said earlier. He said that US Marines have been deployed to Syria to make sure coalition troops on the ground receive necessary support in the fight to retake Raqqa from the Daesh.

© AFP 2020 / USMC
Washington 'Risks Getting Drawn Into Yet Another Ground War in Middle East'
The marines are set to be supporting US partner forces on the ground that lead the offensive to liberate Raqqa from Daesh codenamed Operation Euphrates Rage. The operation was launched by the Kurdish-led Syrian Democratic Forces (SDF) on November 5, 2016. The SDF was formed in 2015 as the defense force of northern Syria's de facto autonomous Rojava federation and is supported by the US-led coalition. The group is among the forces fighting Daesh and brings together Kurdish, Arab, Assyrian and Turkmen fighters, among others.

The news comes after the Pentagon was tasked to send US President Donald Trump options to accelerate the fight against Daesh.

US Deployed Marines in Syria Without Permission of Damascus Government