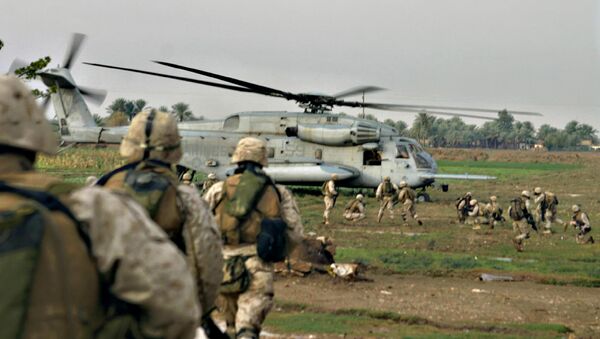 Washington has boosted its military presence in Syria to ostensibly help local forces fight against Daesh, but former US diplomat and Senate adviser James Jatras told Radio Sputnik that the Pentagon's latest deployment could see the United States get bogged down in Syria.

"Frankly, I don't like it. I don't think it's a good idea. As much as anybody else I would like to see Daesh and other terrorist groups in Syria destroyed. It seems to me that could be done without an American ground deployment. It seems that Donald Trump has chosen otherwise and there are real dangers that come with that," he said. "I am not saying that this could not be successful and this could not have a good outcome, but there are definitely risks involved."

Jatras emphasized that he did not mean that this strategy could not be successful, but warned that there are major risks involved.

"The risks are we get sucked in, we get drawn in yet another ground war in the Middle East. And let's be clear – air war is a war too. Using airpower commits the US to putting more special forces on the ground, which was already done under Obama and now is being expended by Trump. Ranger units, artillery units – this is an expansion of the ground war. If we find ourselves involved in a much more direct and extensive combat than was anticipated, we could find ourselves in another ground war. As much as anybody wants Daesh, al-Nusra and other terrorists destroyed, I don't think that we want another ground war in the Middle East."

Senior PYD Official Warns That 'Turkey Wants to Occupy Syria'
The Obama administration initially said that it would not send any ground troops to Syria, making a U-turn once it became clear that its aerial campaign was not enough to "degrade and ultimately destroy" Daesh, as the former US president put it in September 2014. The US has since then sent service personnel to Iraq and Syria to train and advise local fighters. Most recently, Washington deployed 400 Marines and Army Rangers to assist the Syrian Democratic Forces in their operation to free Raqqa, the capital of Daesh's caliphate. Jatras referred to this deployment as "a significant increase."

This is not to say that there are no positive developments with regard to the ongoing Syrian conflict. In this context, Jatras mentioned Manbij, a Syrian city which made headlines last week when Russia and the United States tried to prevent Turkey from advancing deeper into Kurdish-held areas.

Moscow brokered a deal between Damascus and the Syrian Democratic Forces, which administer Manbij. Under the agreement, the Syrian Arab Army created a buffer zone between forces taking part in the Ankara-led Operation Euphrates Shield and the Kurds. For its part, the United States moved its troops closer to Manbij to keep their allies at bay.

World
Russia Starts Preparations to Modernize Naval Base in Syrian Tartus
"There was coordination on this operation between American, Russian and Turkish chiefs of staff. So it seems like there is some effort to get some coordination on the same side, among forces that are suspicious of each other, but to direct their activity against Daesh. In principle that's a good thing," Jatras said.

It could be a step forward "with the caveat, and it's a big one, that we don't get ourselves too deeply dug in than we want," the analyst added. "If we can find a common agenda for the Syrian Army, the Russians, the Kurds, even tacitly the Turks and of course we also have the Iraqi Army's offensive in Mosul, maybe we could start to squeeze Daesh into a pincer movement where you have the Iraqis on the one side, the Syrians on the other side, the Kurds in the north and the desert in the south and you pen them in and destroy them."