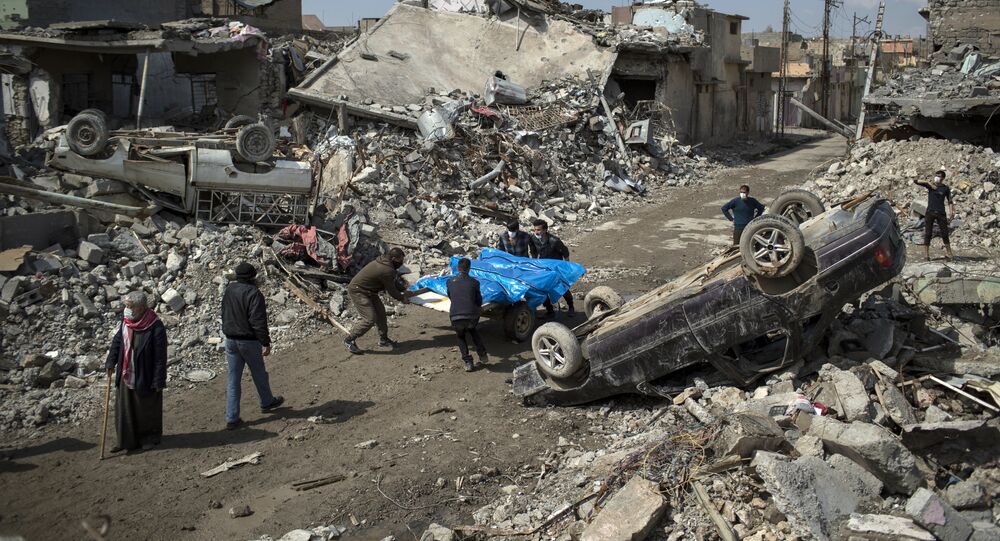 Both Aleppo and Mosul were seized by outlawed militants resisting the legitimate governments of Syria and Iraq, respectively. But despite both cities earlier becoming areas of fierce battlefields, the attitudes towards these battles, inculcated by mainstream media, are so different, according to James O'Neill, an Australian-based Barrister at Law.

In particular, this biased approach was seen in mainstream media covering "liberation of Aleppo by Syrian and Russian forces and the ongoing battle for the liberation of Mosul by 'coalition' (i.e. US) forces in northern Iraq," according to O'Neill.

The author emphasizes that it is impossible to liberate a large populated area captured by terrorists without losses from the local population.

"The Syrians and the Russians were, it literally seemed, being blamed [by mainstream media] for every destroyed building, every civilian casualty, and the complete breakdown of civilian society," O'Neill said, referring to Aleppo.

He added that "also completely lacking in western media accounts was any acknowledgment of the well-documented fact that the Americans and their allies, including Israel, the Gulf States and Saudi Arabia had been providing arms, ammunition, safe havens, political support and medical care for the terrorists for years."

"This photograph seems to hold both civilization and destruction in the same frame," writes @nprscottsimon. https://t.co/cktVEoWnmD

O'Neill also blamed the humanitarian "White Helmets" for "doing little or nothing for the victims" of the Syrian conflict, adding that the media's "duplicity even extended to exhibiting the same child in multiple locations as a bloodied victim of Syrian or Russian 'war crimes'."

On Mosul, O'Neill specifically drew attention to the fact that "the western media ignores the devastation being wrought by the Americans in Mosul, preferring not to show "pictures of destroyed schools, hospitals and other civilian infrastructure" there.

Today marks 3 months after the #liberation of #Aleppo from terrorism by the brave heroes of the #SAA
May all of #syria be liberated as well pic.twitter.com/avtnPIiEWT

In this vein, he mentioned the Iraqi city of Ramadi, which was 80 percent destroyed by US airstrikes in 2015, something that he said was never reported in mainstream media. "The contrast with Aleppo could not be greater," according to O'Neill.

"Why does the western media not ask the obvious questions, such as how it is possible for these disparate terrorist groups to go on fighting for years, with limitless access to modern armaments? Or why are wounded terrorist fighters treated in Israeli and Turkish military hospitals and allowed to return to the fighting?" he said.

© REUTERS / Ali Hashisho
As Daesh Is Cleared Out of Mosul, Will US Policy Change or Remain the Same?
He added that mainstream media is doing its best to keep mum on "the real reasons for US and their allies' military intervention in the Middle East and their support for terrorist groups as an instrument of foreign policy," which he said includes the promotion of sectarian warfare.

Earlier this month, German expert in Arab studies Michael Luders published an article for political magazine Blatter fur Deutsche und Internationale Politik, which reveals the hypocrisy of the western mainstream media narrative in covering operations on the liberation of Aleppo and Mosul.

Luders argues that the main reason for the disparity in the coverage is that "if Mosul is liberated from Daesh it will have a positive impact on the image of the West," as it will be liberated by the Iraqi army with the support of the US-led coalition, unlike Aleppo, which was liberated by the Syrian army with Russia's support.

In this manner, the ongoing media frenzy regarding Russia is carefully maintained, despite mainstream outlets holding up banners of "impartiality," according to him.

Casualties within the civilian population are not as widely covered in the Mosul battle, despite deaths in both cities, the author said, adding that while it is presented as an indictment of a terrible regime in Aleppo, it is nothing more than "collateral damage" in Mosul.

Map showing the current situation in #Mosul — #ISIS surrounded in the western side, running out of time,support & fighters.
Map: @_Misrati pic.twitter.com/1kfq9JhgbM

Also this month, one of the refugees able to flee Mosul told Sputnik about the dire situation in the city and surroundings. In an interview with Sputnik Arabic the woman said that the Hamam al Alil refugee camp, located to the south of Mosul, is on the brink of a humanitarian catastrophe.

The interview came after the Russian Foreign Ministry said that it is outraged by mainstream media and international NGOs’ silence over the events in Mosul.

Last year, the Chinese newspaper People's Daily reported that Washington is pursuing its own vested interests by conducting military operations in Syria and Iraq, while the US' attitude to these two wars is biased and non-objective.

Our Iraq chief warns of an acute humanitarian situation with 400,000 currently trapped in Mosul. https://t.co/16IVWwV2z8 pic.twitter.com/dZZVw1kMgt

The media outlet drew attention to the fact that both Daesh (ISIS/ISIL), which is holding Mosul, and al-Nusra Front, [which fought for Aleppo at the time], were designated by the UN as terrorist organizations.

© AFP 2020 / LOUAI BESHARA
First in Over Four Years of War Train Travels in Syria's Aleppo
The city of Mosul has been occupied by Daesh since 2014. The operation to retake it began on October 17, 2016 and resulted in the liberation of Mosul's eastern part this January, but fighting continues in the city's western areas. The operation to liberate it started on February 19.

US Probes Civilian Deaths in Mosul Amid ‘Unprecedented Levels’ of Fighting

Operation to Free Mosul Has Tragic Consequences for Civilians - Moscow