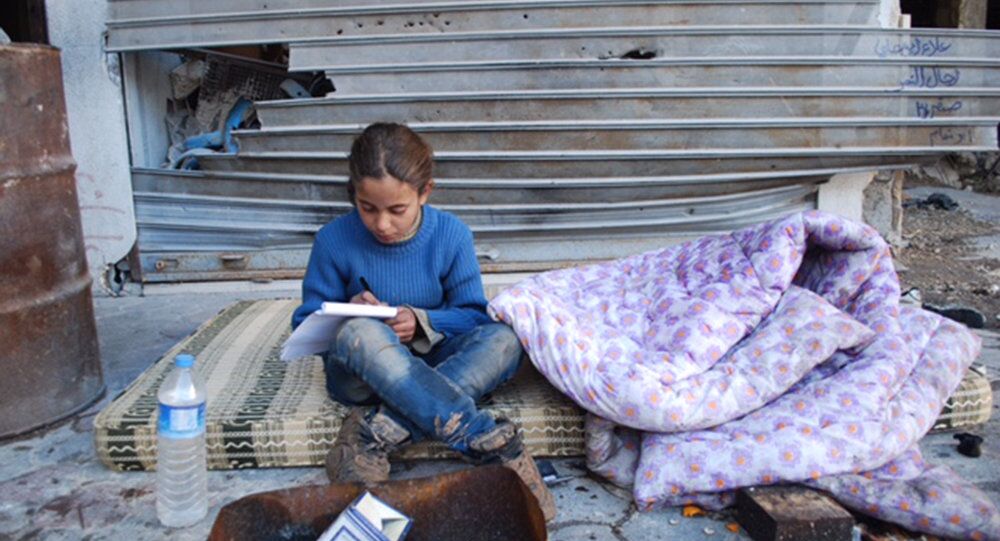 German expert in Arab studies, Michael Lüders has recently published an article revealing the hypocrisy of western mainstream media narrative in covering operations on the liberation of Aleppo and Mosul. Sputnik Deutschland observer Tilo Gräser commented on the revelations in Lüders' article.

"Wars are told, no different than stories. The respective tales determine the image in our minds, our view of conflicts. We know or we believe to know who is guilty and who is not, who are the goodies and who are the baddies," Michael Lüders writes in his recent article The War in Syria and the Blind Spots of the Wes for political magazine Blätter für deutsche und internationale Politik.

© Sputnik / Andrey Stenin
Russia Brings Water, Food to Syrian Civilians in Aleppo, Damascus
In the case of Syria, he says, the prevailing point of view imposed by the mainstream media that the criminal Assad regime is waging war against its own people, supported by the no less unscrupulous rulers in Moscow and Tehran.

Meanwhile, the Syrian opposition is often referred to as "moderate" or perceived as the "Syrian people desperately struggling for freedom."

The author then cites as an example the recent liberation of the Syrian city of Aleppo when the mainstream media published emotionally penetrating pictures of wounded children to support the accusations of the Syrian authorities and the Syrian army.

The other side to the conflict is rarely mentioned, even though it is known only too well that President Assad's enemies are the jihadists.

© AFP 2021 / Louai Beshara
Ex-Militants Who Fought Syrian Army in Aleppo Join Pro-Assad Forces After Amnesty
"It is impossible not to notice the difference in coverage," he notes, despite the fact that  there could potentially also be numerous civilian casualties during the liberation.

This, he says, clearly demonstrates how our perception of war is manipulated by the mass media. The mainstream media presented the 'fall' of Aleppo as an inferno, comparable to the downfall of Dresden during the Second World War. The main focus was on the human tragedy which replaced the political analysis. Any other approach would have meant that the average thinking person would have joined-the-dots – leading to questions about how the US could reasonably be acting jointly with al-Qaeda.

None of this however happens with the coverage of the 'liberation' of Mosul.

Lüders' argues that the main reason for the disparity in the coverage is that "if Mosul is liberated from Daesh (Islamic State) it will have a positive impact on the image of the West," as it will be liberated by the Iraqi army with the support of the US-led coalition, unlike Aleppo, which was liberated by the Syrian army with Russia's support. In this manner, the ongoing media frenzy regarding Russia is carefully maintained, despite mainstream outlets holding up banners of 'impartiality'.

Casualties within the civilian population are not as widely covered in the Mosul battle, despite deaths in both cities, the author says. And while it is presented as an indictment of a terrible regime in Aleppo, it is nothing more that "collateral damage" in Mosul.

Readers and viewers of mainstream media are treated to cheering crowds, victorious Iraqi servicemen, dancing Christians returning to their homes in Mosul and surrounding villages. However, by the time Russian and Syrian servicemen entered Aleppo to the same scenes, the mainstream media reporting on the events had conveniently moved on.

© AFP 2021 / Mohammed SAWAF
Iraqi Forces Liberate Amle District in West Mosul From Daesh
Commenting on the article, the Sputnik Deutschland observer noted that the Europeans, with the Germans above all, found themselves in the midst of a storm for which they are jointly responsible, because their politicians have tilted toward Washington's view on the conflicts and its obstinate urge: Assad must leave, instead of steadily defending their own positions.

This is a price for the imperious ambitions of others, he states.