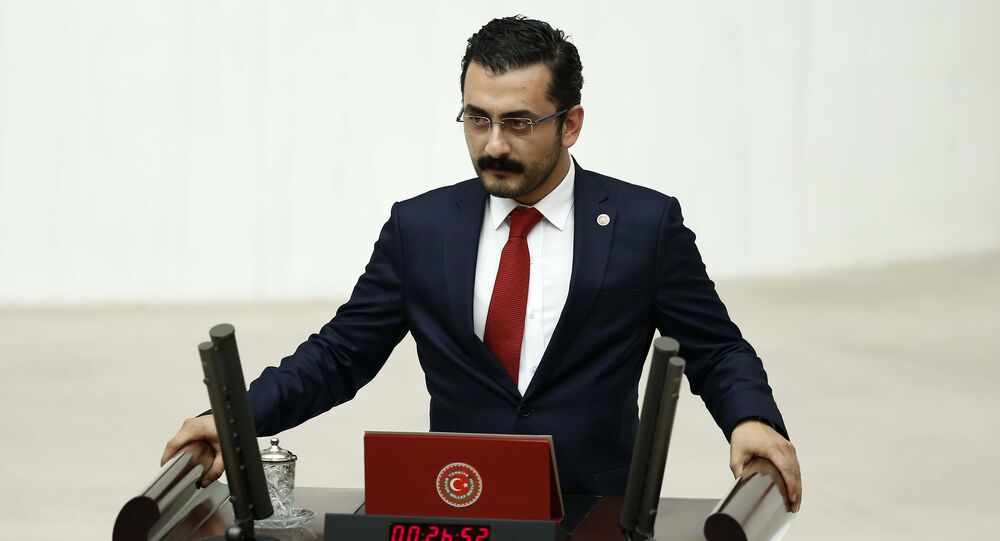 Eren Erdem, from Turkey's opposition Republican People's Party (CHP), who revealed that Daesh terrorists had obtained sarin gas supplies through Turkish territory, now faces terrorism charges in his country; the lawmaker says that the accusations are based on some “secret witness statements” without any documentary evidence.

Eren Erdem, the deputy of Turkey's CHP political party, who is also an investigative journalist, now faces terrorism charges in his own country.

The Turkish government has submitted a motion to remove Erdem’s parliamentary immunity opening up Erdem to a possible lifetime in prison for ‘terrorism links.’

Sputnik Turkey got in touch with the Turkish lawmaker regarding the investigation in the Turkish Grand National Assembly (TGNA) against him.

Erdem explained the reasons behind the charges to Sputnik, calling the investigation yet “another conspiracy” against him.

“They have launched an investigation into me for being a member of the ‘parallel structure’ which is a nondescript and ambiguous terrorist organization,” the lawmaker says.

“Let me explain; the owner of the newspaper that I manage was sunk due to some news about corruption. This witness sent me some messages via whatsapp and said that the government is offering me money, with Erdogan’s consent, that they promise to write off my tax debt, if I sign a statement that they want.”

“One of the reasons is my strong opposition to Erdogan’s policy, especially the Sarraf case in the US which is related to Erdogan and his ministers’ corruption. Two years ago, I was the only journalist who studied the money trail between Sarraf and politicians in Turkey. The government tried to destroy everything (documents, proof) associated with these relationships.”

The lawmaker refers to the case of Reza Zarrab, also known by the name Riza Sarraf, a Turkish gold trader who was at the center of a corruption scandal that engulfed President Recep Tayyip Erdogan and his inner circle.

Back in 2013 Sarraf was accused of bribing senior ministers from Turkey’s ruling party with cash and lavish gifts as part of a scheme to bypass US sanctions on Iran.

© AFP 2020 / PHILIPP GUELLAND
Daesh Receives Toxic Sarin Gas Ingredients From Turkey – Lawmaker
He was arrested in Miami and charged with laundering millions of dollars as part of a scheme to help the Iranian government evade economic sanctions.

In response to the scandal, Erdogan turned Turkey’s bureaucracy upside-down, dismissing thousands of state employees, police officers and prosecutors, with many sent to jail.

He also labeled a group of former allies he blamed for the accusations, the Gulen religious movement, a terrorist organization.

“Another reason is my revelation about the deadly sarin gas allegation. Due to my investigation into the sarin gas issue, Erdogan and his government have been hell-bent on revenge for a long time,” Erdem continues.

© AP Photo / Vadim Ghirda
Erdogan Lashes Out at Lawmaker for Revealing Turkey-Sarin-Daesh Cover-Up
In December 2015 Erdem told RT news channel that Daesh terrorists had obtained sarin gas supplies through Turkish territory – and that Ankara did nothing despite having all the evidence in hand.

What Erdem actually revealed in an interview with RT were the details from a criminal case opened, and then abruptly closed, by the General Prosecutor’s Office in the Turkish city of Adana.

His account alleges that Turkish authorities had acquired a great deal of evidence concerning sarin gas shipments to militants in Syria that later became Daesh (formerly ISIS/ISIL), but did nothing to stop them.

The lawmaker noted that materials for making chemical weapon were brought to Turkey and mixed in Daesh camps in Syria.

© AP Photo / File
Wave of Arrests Targets Erdogan Opposition in Turkey
The indictment stated that the chemical weapon components originated from various European countries and were to be seamlessly shipped via a specific route through Turkey to militant labs in Syria.

Despite the detailed evidence available, the 13 suspects arrested in raids in connection with the plot were released and the case was closed after just a week.

Shortly after his revelations Erdem was accused of treason with Recep Tayyip Erdogan then raging at the silence of the Republican People’s Party (CHP) concerning Erdem’s revelations.

“There is a deputy in this country, buried so deep in a pit of betrayal, and to a party that claims to be as old as the republic saying during an interview to a foreign television channel that Turkey is selling chemical weapons to terrorists,” Erdogan then told a crowd in the city of Konya.

German Opposition May File Lawsuit Over Sending AWACS to Turkey