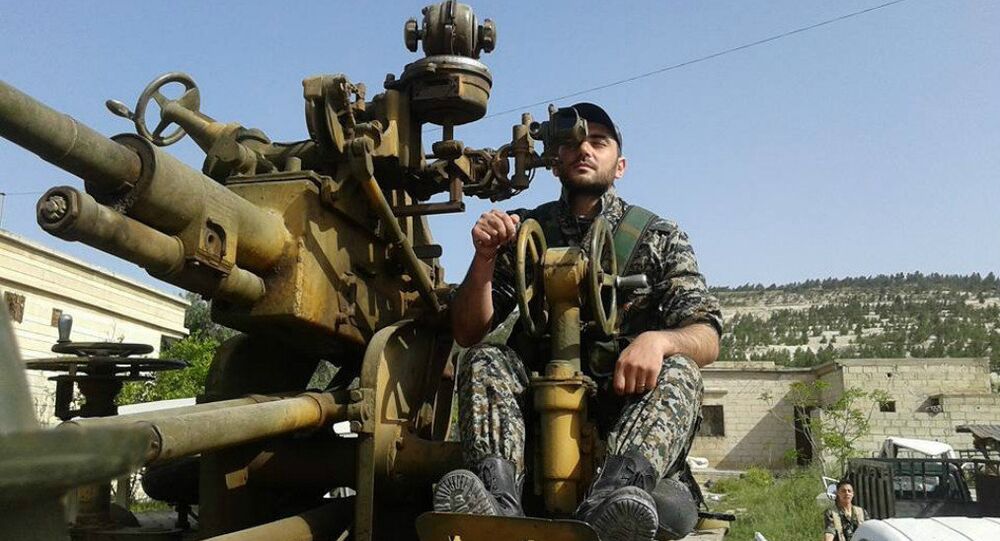 Syrian Students Tell Sputnik Why They Swapped Their Textbooks for Guns

In war, there are no permission slips from the teacher. Many Syrian university students have given up their textbooks, notepads and research projects, not to mention their lives as civilians, replacing pens and pencils with the metaphorical sword, often in the form of an assault rifle, to protect their homeland. Sputnik spoke to a few of them.

Sputnik interviewed four young Syrians, including two post-secondary students, a professor of archeology and a young man straight out of high school, who decided to drop their studies and academic work to join the fight against terrorism.

'Who Said the IT Guy Can't Fight?'

Khaldun Da'oun is a young IT guy, receiving his education in computer science. Before the war, he studied and worked in the small city of al-Salamiyah, in Hama province.

"My house is located in a village near territory controlled by the Daesh terrorists, in the eastern part of an area bordering the Syrian desert. They are less than 5 kilometers from us in the villages of Klib al-Sor, Umm Hazira and al-Hart. I quit my job and my studies, and took up arms," Khaldun said.

For the young professional, there was no priority greater than protecting the village where his family lives from the terrorists.

"When you hear about an attack in the vicinity of our village, you can't just sit idle, with your arms crossed. You will stand up side by side alongside the other defenders of the homeland. [We] all know about the young people killed in al-Salamiyah city – thousands dead. He who protects his people brings glory to his village," Khaldun added.

Archeology Professor in Defense of Civilians

© Sputnik / Michael Alaeddin
After the War: Syrian Soldiers Reveal Hopes for When the Fighting Ends
Mustafa Oda, a professor of archeology and soldier in the city of Aleppo, told Sputnik that when a person enters the battlefield, the instinct of self-defense and combat, or as he puts it, the 'military psyche', turns on automatically.

"From the first moment when you arrive on the front, you forget about your life, and about everything connected with it. You forget what you had taught; the only concern becomes the defense and protection of your family," Mustafa said.

At the same time, the young man noted that the country faces problems regarding the distribution of scientific personnel, which, he says, could better serve research, even in the military sphere, than as soldiers at the front.

"People with great intellectual potential, whose minds are tied to scientific matters at the physiological level, can bring a greater contribution to the country in the field of military science, or in the science of electronic warfare. Recently, we lost two comrades at the front; one of them was a doctor of historical sciences in the field of archeology, the other a doctor of agricultural sciences," Mustafa lamented.

'Hitting the Books? Only When we Win the War'

Khaled was a student at the faculty of tourism before deciding to leave school and join the ranks of the Syrian army in the Damascus suburb of East Ghouta. While there is a war going on, he says, further studies are pointless.

© Sputnik
Khaled, who said that it was pointless to continue his studies when the country is threatened to its very core by terrorism.

"After the deaths of many of my friends in different parts of the country, I decided to join the army and went to the front. Now I'm fighting on Damascus's 'Eastern Front'. I will continue my studies, but only when the war is over, when we defeat terrorism and resolve our country's many problems," Khaled said.

Straight Out of High School to the Front

Hussein is from Damascus. After finishing high school, he immediately enrolled as a volunteer into a military academy. For him, Syria's future and the return of peace is more important than continuing his studies.

"We will prove to the whole world that we are able to restore our strength," Hussein assured Sputnik.

Statistics cited by Sputnik Arabic have shown that the number of students in Syrian educational institutions has declined significantly over the last six years. Upon completing their studies, most young Syrian men instead join the ranks of the army and or allied forces (including local pro-government militias) to protect their homes and their land, especially in the border areas near the provinces of Deir ez-Zor and Raqqa, and in the country's north and east.

After the War: Syrian Soldiers Reveal Hopes for When the Fighting Ends