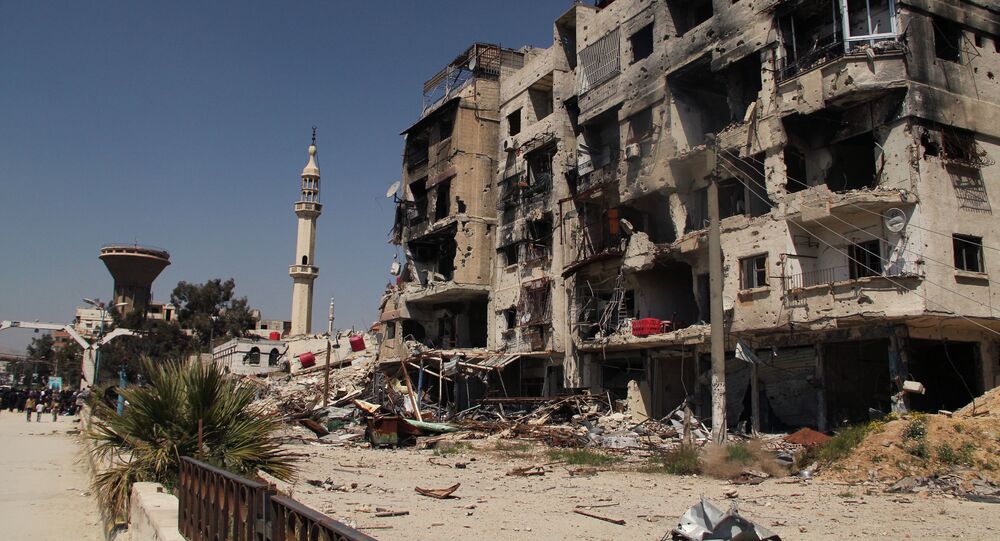 Would-be Islamic extremists can travel to Syria via Turkey, Jordan or Iraq. As for law-abiding citizens, they do not have many choices with Lebanon being the only relatively safe option.

BEIRUT/DAMASCUS (Sputnik) — Two RIA Novosti correspondents chose this route to make their way to front-line Damascus, some suburbs of which are controlled by militants.

Technically, Damascus International Airport remains open to international flights, although most foreign airlines suspended their services to the Syrian capital several years ago for security reasons. Rebel groups have access to anti-aircraft weapons that can down planes. If you do manage to fly into Damascus, the road from the airport to the capital remains a fairly dangerous zone. The Syrian Army cannot rid it of extremists who periodically shoot at passing cars and sometimes take hostages. As a result, any trip along this road becomes a flirtation with death.

The route via Lebanon is comparatively safer. The distance between Beirut and Damascus is less than 87 miles and most of it passes through Lebanon’s Bekaa Valley. This is not the safest place in the world, but at least nobody opens fire at passing vehicles.

Border formalities take less than half an hour. “It was worse here before,” a Lebanese border guard said. He added that every day Syrian refugees crowd the border checkpoints trying to flee from the war to the more stable Lebanon. As a result, the country, with a population of 4.2 million, has become a shelter for over a million Syrians, a heavy burden that has stretched its resources to their limits. Lebanon has toughened its admittance rules and as a result the border has become less crowded recently.

© AFP 2021 / BULENT KILIC
Shots Fired At Three Ambulances in Kurdish City on Syria-Turkey Border
A four-lane highway from the border to Damascus is well-maintained, with army checkpoints dotted along it. However, this does not guarantee security. Taking advantage of the troubled times, militants and ordinary thugs periodically come down from the mountains and ambush isolated cars with trucks or SUVs. Anyone stopped is lucky to get away with their lives and the loss of just their valuables. It would be worse if they viewed you as a commodity. A foreign head commands a high price here.

Security is a requirement on this stretch of road. Unaccompanied cars are left with no option but to race from the border at high speeds. They slow a bit at the checkpoints to avoid falling victim to Syrian Army personnel who, like their Lebanese colleagues, are officially allowed to shoot to kill if a driver fails to stop on their order. A rapid exchange of salutes is followed by more crazed speeds. No tickets for speeding on this highway. So the three-hour Beirut-to-Damascus route now takes only — a hair raising — 30 minutes.

Naturally, Damascus has changed over the course of the five-year conflict. Uniforms are much more visible in the city streets. By some estimates, the capital’s pre-war population of less than two million has almost doubled in the past few years because of the influx of refugees. Army and police checkpoints separate city districts and sometimes streets. Road-checks exacerbate the already bad traffic congestion, although, as a rule, drivers are just asked to open the trunk. There is express lane for cars with special passes that are issued by government security ministries in operation at each checkpoint, although, as experience shows, even a Russian passport can sometimes do the trick.

Regular blackouts keep the war at the forefront of people's minds in Damascus. Syria today generates only about 20 percent of its prewar energy outputs. The authorities have mandated a plethora of energy saving measures, from switching off building lighting to air conditioners that are not to be used even when temperatures push 104 degrees Fahrenheit. “We have an air conditioning system in this building but it takes too much energy. This is why they got these old coolers,” the head of the prime minister’s office, Attiyah al-Hindi, said, pointing to a worn-out cooler in his office.

Sometimes, militants will fire a shell or rocket toward the city. Usually they aim at government offices or military facilities, but the dense development and chronic inaccuracy puts anyone who lives near a potential target at risk. In the spring, the city was shelled every day, but now things have calmed down. Several days can pass without an explosion.

During the relative lulls, the Damascenes try to pretend there is no war. The city’s old bazaar is bustling; sellers push their goods and buyers move between the rows. Cafes are crowded with people, including entire families. Yet tourists are conspicuously absent.

© Sputnik / Andrei Stenin
Syrian Army Repels Attack on North Damascus Checkpoint - Source
Jewelers and other shops are clearly bored by the lack of customers and are willing to offer huge discounts to the rare client. In reality, currency exchange has become their main source of revenue. They readily exchange dollars and euro for local liras at better than official rates.

VIGILANCE IS OUR WEAPON

Nevertheless, people cannot afford to let their guard down. Militants from Jaish Fatah, Jaish Islam and Ahrar Sham are nearby in the suburbs of the Syrian capital, in Jobar and Nusra. ISIL occupies part of the Palestinian refugee camp of Yarmouk about 3 miles outside Damascus along with several villages near the camp. A militant checkpoint may even be found just a mile from a restaurant in the old part of the city.

© REUTERS / Thaier Al-Sudani
ISIL- Infested Yarmouk Camp Palestinian ‘Responsibility’ –Palestinian Party
For all of this, only the prime minister’s office has proper security. Concrete blocks, that even trucks cannot move, block the way through control posts. People in military uniforms and plainclothes officers quickly rush up to arriving cars. Only after lengthy consultations with superiors is it given permission to enter the government quarter. Then a visitor will have to go by foot through another two security cordons. Other government buildings are much less secure, at least on first inspection.

Local residents seem to have faith in the Syrian Army, but they are ready to defend themselves as well. They say a Chinese-made Kalashnikov rifle can be bought for $500 on the black market. The Soviet version is more expensive. Cartridges are $1 each. Judging by the prices, there is demand.

Seasoned residents advise learning at least something about the city's districts when taking a taxi to reduce the chances of the driver wilfully taking you in the wrong direction.

“They don’t make much, so the temptation is great, especially since it’s so simple – you turn onto some side street a couple of times and within ten minutes you’re in a district controlled by the militants. Then you get your money and go home,” a local colleague told us while closely watching that our driver was following the right route.

“Rusi?” our taxi driver asked having overheard our conversation. On receiving an affirmative answer, he began praising Russia, its leaders and the ordinary people who support Syrians both politically and economically. “This driver will get us to the right address,” my companion assured me.