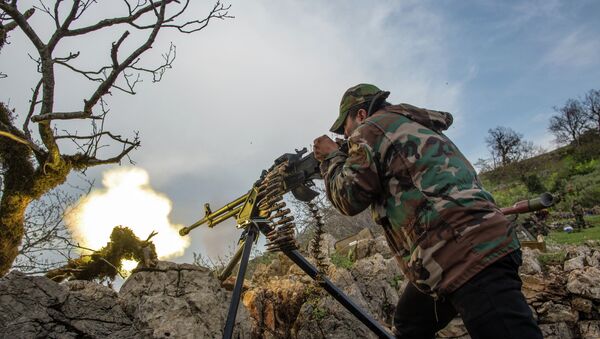 A 15-minute encounter was precipitated by two attacks – one carried out by a suicide bomber and another via an explosive device installed on a motorcycle.

BEIRUT (Sputnik) — Syrian government forces repelled an attack on an army outpost in northern district of the capital Damascus, a source in the Syrian military said Monday.

"Every member of the armed group that attempted to attack a Syrian Army checkpoint in east Ruken Al Din in Damascus has been killed," the source told RIA Novosti.

The 15-minute encounter was precipitated by two rebel attacks – one carried out by a suicide bomber and another via an explosive device installed on a motorcycle – at the checkpoint guarding the management and logistics building.

The military source, however, repudiated the UK-based SOHR's report that a general in charge of the army's munitions and supply division sustained injuries.

The Syrian army has been involved in an armed conflict with several rebel and extremist groups since March 2011 in that has claimed over 220,000 lives, according to the United Nations.

None of the groups active in the country – including the Islamic State and the Nusra Front – has claimed responsibility for Monday's bombing attacks.