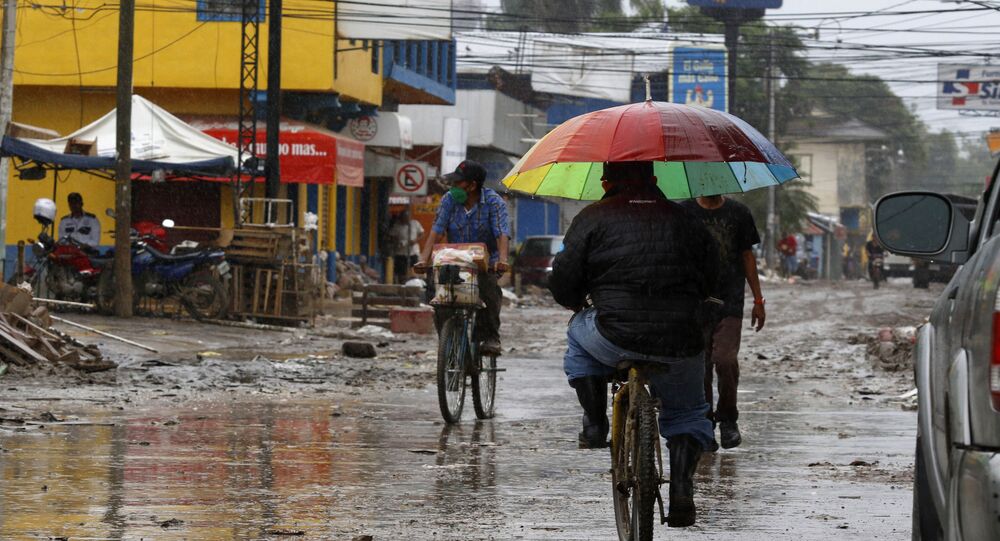 Hurricane Iota has been declared the first Category 5 storm of the 2020 season after exceeding maximum wind speeds of 157 mph. The storm will be the second to hit Central America within the last two weeks.

Recently upgraded to a Category 5 cyclone, Hurricane Iota is set to make landfall in Nicaragua late on Monday, bringing with it life-threatening winds and heavy rains that are expected to create dangerous landslide conditions in a region recently pummeled by the arrival of Hurricane Eta.

The latest Monday update issued by the US’ National Hurricane Center (NHC) indicates that the powerful cyclone is located about 35 miles from Puerto Cabezas, Nicaragua, with maximum sustained wind speeds of 160 mph while moving toward the coastline at a pace of 9 mph.

Hurricane-force winds have been recorded some 45 miles from the cyclone’s eye, and tropical storm-force winds are said to extend outward up to 175 miles.

The agency’s bulletin warns that the powerful hurricane is expected to bring “catastrophic winds, life-threatening storm surge and torrential rainfall” to the region before rapidly weakening after making landfall.

“A life-threatening storm surge will raise water levels by as much as 15 to 20 feet above normal tide levels in areas of onshore winds along the coast of Nicaragua and Honduras,” reads the alert. “Near the coast, the surge will be accompanied by large and destructive waves.”

Residents living in Honduras, northern Nicaragua, southeast Guatemala and southern Belize are expected to receive the brunt of the rainfall in the Central American region, with forecasts indicating the possibility of as much as 30 inches of rain.

At present, a hurricane warning has been implemented for the coastlines of Nicaragua and Honduras in addition to Providencia, a mountainous Caribbean island governed by Colombia.

​Iota became the first Category 5 hurricane of the 2020 season early Monday after satellite data determined that the cyclone had exceeded wind speeds of 157 mph. Additionally, it has become only the second recorded Category 5 storm in the Atlantic basin in November.

According to Weather.com, the only other such cyclone was the 1932 Cuba hurricane, which initially formed in late October of that year before reaching Category 5 and striking the island nation on November 5. The storm’s wind speeds reportedly hit 175 mph before landfall. It was the 14th recorded storm of that season.

Jonathan Erdman, senior digital meteorologist for the Weather Channel, has also indicated that the storm’s arrival to the Central American coastline is “likely to be the first back-to-back major hurricane landfalls in any single season on record in Nicaragua.”

Prior to Iota’s imminent landfall, Hurricane Eta wreaked havoc on much of Central America after arriving as a Category 4 cyclone. Lingering off the Honduras-Nicaragua border for hours, Eta dumped multiple inches of rainfall on the area, where residents were subjected to downed trees, swollen waterways and several landslides. The slow-moving storm is estimated to have killed dozens of local residents, with hundreds feared dead due to the landslides.