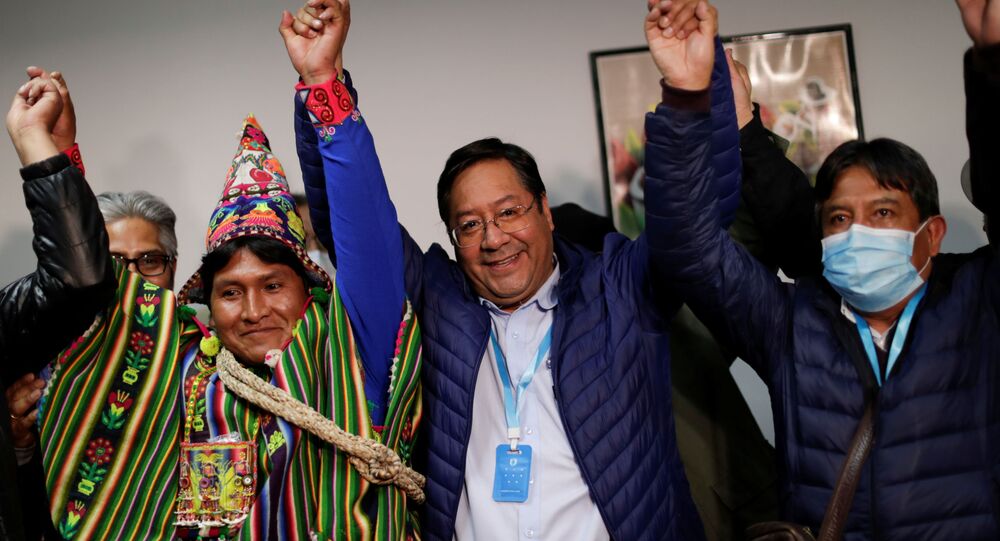 The Movement For Socialism (MAS) scored an impressive victory in Bolivia this Sunday with former finance minister and presidential candidate Luis Arce beating his right-wing contenders by a huge margin. Bolivian journalist Alberto Echazu and Argentine author Gonzalo Fiore Viani discuss what could happen next.

"We still don't have the official count, but from the data we have, Mr Arce and [vice-presidential candidate] Mr [David] Choquehuanca have won the election. I congratulate the winners," de facto interim president Jeanine Anez tweeted on 19 October.

Speaking to the Spanish international news agency EFE, Arce indicated on Tuesday that if the MAS victory is confirmed he would restore the diplomatic relations with Cuba, Venezuela and Iran which had been suspended by the de facto government.

"Luis Arce's victory was so overwhelming that, despite not yet having the official results in hand, Jeanine Añez was forced to come out to admit it," notes Argentine author and political analyst, Gonzalo Fiore Viani. "According to the ballot boxes, the candidate of the Movement For Socialism got 20 per cent more than his closest contender, Carlos Mesa. Anez, at this point, don’t have any other options than to facilitate the most peaceful transition possible".

Having said that, Viani admits that there is a lot of tension between the de facto government and MAS over last year's coup and bloody clashes which left at least 35 dead. In addition to this, some right-wing militant groups have taken to the streets saying that they do not accept the election results.

Shock groups linked to the defacto administration rallied in Sucre, near vote a counting facility. They like the far-right groups is Cochabamba and Santa Cruz are not prepared to recognize the MAS victory. @teleSURenglish pic.twitter.com/TasT56YmKN

​Nevertheless, power should be transferred without any major obstacles, according to Alberto Echazu, a Bolivian political analyst and journalist with La Resistencia Bolivia. Arce may be sworn by mid-November, though the date has not been confirmed yet, according to him. "As Anez doesn’t have the constitutional mandate to deliver the presidency, Arce will receive the presidential band from the elected Vice-President, David Choquehuanca", the analyst specifies.

Supporters of neoliberal candidate Carlos Mesa are blaming Camacho for allowing the MAS to win by splitting the pro-coup vote. They clearly can't do maths.

Bolivia's neoliberals have never been a majority, they ruled for 1 year because the US foisted them upon on us via a coup. pic.twitter.com/6OJn1fpGI9

​"What is left to be seen is how the de facto government will handle its last few days in power", Echazu says. "The Legislative Assembly has passed a law that obliges all government authorities to remain in the country for three months after the change of the government - this because of the innumerable corruption cases during the 11 months of the de facto administration and the expected flight from the country by the de facto authorities, so that is something to follow closely".

© REUTERS / STRINGER
Women walk past a newspaper stand and a headline reading "Pollsters: Arce is the president-elect" , in La Paz, Bolivia October 19, 2020.

New President Will Have to Deal With the Economic Crisis

Luis Arce is expected to get in gear once he assumes the presidency since there are a lot of issues which require urgent action, according to the Latin American observers.

"Arce has proposed the bond against hunger as an immediate action, and will continue with the guidelines of the economic model that he created – the Social Communitarian Productive Economic Model, placing emphasis on public investment and job creation together with industrialisation, which are all stated on MAS’ government program", Echazu explains.

Touching upon loans taken by the Anez cabinet worth many millions of dollars, the Bolivian political analyst reminds his audience that Arce previously announced that the loans taken by the de facto government will not be recognised, citing the fact that they were rejected by the Legislative Assembly.

For his part, Viani notes that Arce and the MAS will have to deal with the deepest recession and economic crisis in the country since 2005.

"We will have to have austerity measures. There’s no other option if we don’t have enough income to cover our expenditure," Arce acknowledged earlier this week, as quoted by Reuters.

In the worst case scenario Bolivia's allies may help La Paz get rid of the debt, suggests Viani.

"I believe that with the support of Argentina, México and the Vatican, [Arce's] government will, in fact, be able to renegotiate the debt with the International Monetary Fund (IMF), as the Argentine government is doing", the author says, "so I don’t think that will be a big issue."

Viani underscores that the former minister of the economy and present president-elect is considered to be "the father of the 'Bolivian economic miracle', which allowed the country to have the largest sustained growth in its history" under the government of Evo Morales.

"Bolivia grew uninterruptedly in the period from 2006 to 2017: the annual average was 5%, and it was the only country in South America that has managed to maintain this level. In the same period, it reduced poverty from 63% to 39%, maintained the lowest inflation in the region and had a trade surplus which was praised by the IMF and the World Bank", he elaborates.

The memory of this era played a significant role in the 2020 Bolivian election, according to the Argentine analyst.

© REUTERS / DAVID MERCADO
Supporters of Presidential candidate Luis Arce of the Movement to Socialism party (MAS) play sicus, a native instrument, as they take part in celebrations after the election day in El Alto, outskirts of La Paz, Bolivia, October 20, 2020

When Will Evo Morales Return to Bolivia?

With the MAS returning to power, former Bolivian President Evo Morales is expected to return to the country from exile.

"That remains to be seen, but it will surely happen after the transfer of power and after the charges the regime levelled against him are resolved", says Echazu.

After taking over, the Anez government accused Morales and dozens of his former administration officials of terrorism and sedition, which was denounced by MAS as politically motivated persecution.

Morales will remain in Buenos Aires for some time, the Argentine analyst says.

"[Morales] has said that when he returns [to Bolivia], he will go to his native homeland, Cochabamba, to cultivate the earth and will lead a life far from public politics", Viani says. "But he will be, of course, a counsellor for the new president. Although it is not yet known exactly what the dynamics of power will be inside and outside the party, the figure of Evo Morales continues to be the most important in Bolivia".

On Tuesday, Arce confirmed that Morales will not hold any official position in the MAS government.

The Latin American observers do not expect the MAS to take its "revenge" for the November coup, citing Arce who previously said that he wants a government for the people and a reconciliation period.

However, Echazu does not rule out that the new Legislative Assembly and the Public Ministry will open criminal investigations for the crimes against human rights, freedom of speech et cetera, in the course of the November coup and the de facto government.

Socialism Wins in Bolivia, Corruption is Brought to Light in France