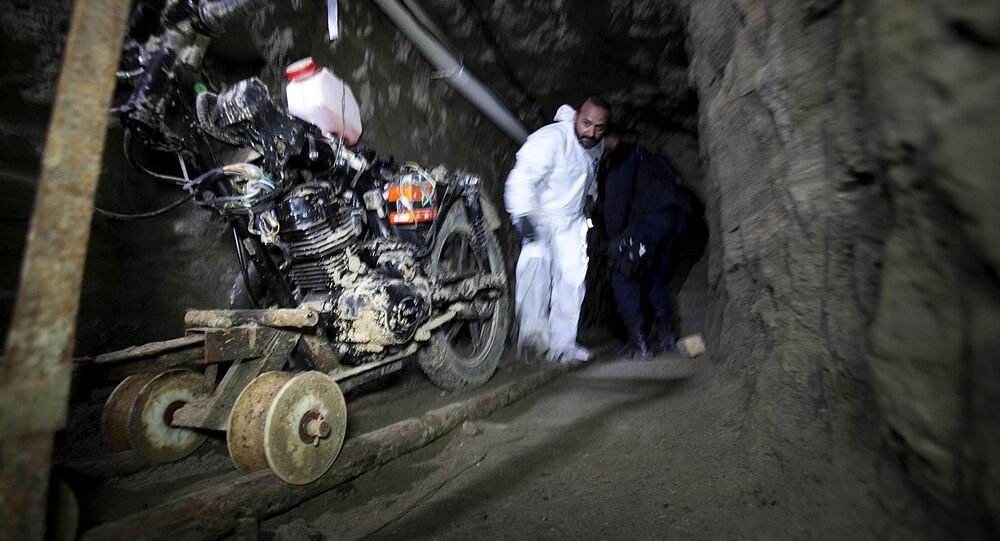 Notorious Mexican drug kingpin Joaquin Guzman, 62, also known as El Chapo ("Shorty") was sentenced to life in US prison this summer. A court convicted Guzman on 10 counts, including drug trafficking, firearm possession in furtherance of drug crimes and participating in a money-laundering conspiracy.

Guzman was the principal leader of the Sinaloa Cartel, responsible for importing and distributing vast quantities of cocaine, marijuana, methamphetamine and heroin into the markets across the United States. After El Chapo was jailed in the US, rival criminal gangs engaged in a war for control for his infamous drug tunnels constructed under the US-Mexico border, the newspaper Daily Star reported.

"I imagine that at any one time there are between 10 and 50 tunnels operating. Not all of them are active at the same time but they will be available. The cartels have invested a lot of time and effort over the years in building these tunnels. They’re picking out the right locations within urban areas, as well as desert, so that they can move the drugs. The best thing about operating in an urban area is of course that you can build your tunnel from within a building and have it come up within a building on the other side. It never gets seen by the authorities”, Duncan Wood, director of the Wilson Centre’s Mexico Institute, said, cited by the Daily Star

According to the pundit, cited by the UK-based media outlet, the notorious Sinaloa Cartel is not the only gang moving products across the border. Various criminal organisations may either work hand-in-hand or compete against each other for the underground routes.

“There are tunnels which are controlled by one cartel but sometimes they rent them out to others. They basically take a cut of the profits for moving the drugs across the border; that cut of the profits is significant because the last mile is the most difficult and most dangerous. I don’t know whether you’ve got different factions controlling different crossings at the border. I’m sure that is the case, but I don’t know where”, said Wood, cited by the Daily Star.

In late 2018, US Drug Enforcement Administration (DEA) agents discovered an incomplete cross-border tunnel near the city of Jacumba in California, less than a mile north of the US-Mexico border, according to a media report. The tunnel reportedly contained solar panels designed to run electrical, lighting and ventilation systems, pumps to drain water and a rail system that stretched its entire length.

This kind of tunnel can cost between $1 million and $2 million to build, according to some but the money is made back in one drug shipment.

According to US-based media reports, El Chapo’s drug trafficking empire was built with the help of underground tunnels that reportedly infest the US-Mexico border. The underground corridors reportedly allow the movement of billions of dollars worth of narcotics and gave Shorty an edge over his competition.